This is the last group of figures that I have completed for my company of Tudor infantry from the 1540s, the archers. I decided to go for more toned down colours than I used for the Arquebusiers, who were far more likely to have been Spanish and Italians employed by the English Crown and thus perhaps in more colourful clothing, and I am pleased with the results. Some of the figures are in the white uniform coats while for others I have decided to depict them in their own coats or doublets with the St Georges Cross sewn on and a red trim added. I really like the resulting look of the group. While they are not all uniformed, which for some reason I feel gives a bit too much of a "Toy Soldier" look with these white coats (have a look at the billmen to see what I mean http://camisado1500s.blogspot.co.uk/2014/05/tudor-billmen-and-whifflers.html), there is still uniformity.
You may notice a difference from my earlier figures with the bases. The bases have been a thorn in my side for a long time. When I initially started my Italian Wars collection, years ago, they were a stop gap while I decided how I wanted to base my figures and how many I wanted to go on a base. The problem was as I kept painting and hadn't come to a decision more and more figures ended on on the flock bases and the whole collection was based the same! When I painted up the Perry Wagons I realised that they would look terrible on just plain flock bases, as the bases have to be large, so I did something different with them. The Wagon bases still fit in fine with the other figures in my collection, especially when on the terrain boards so this led me to have a go with a similar style of basing with these figures. I hope you will agree they are a big improvement although saying that I have ordered some other basing bits and pieces and may now embark on a period of experimentation to find something suitable. It's always a work in progress and I am still undecided how I will do the bases from now on. With regard to the entire collection I think rebasing the lot would be an enormous task but I may do some of my favourite troops like the Swiss pike block I converted and painted. Redoing all the Tudors would not be a huge task and as they are a distinctly different period from my Italian Wars stuff this would probably be a good idea.
At the moment I am in the rare position of not having much to paint! I have a couple of little bits and pieces to do that should show up here in the next few months and I have one more big terrain piece to complete, I haven't got the terrain bug out of my system quite yet. Really I am waiting for the Perry Light Cavalry, 1450-1500, for which I have ideas of at least three different troop types I want to use them for, some requiring more conversion work than others. I am also keen to see how the Pro Gloria Miniatures Plastic Landsknecht figures turn out, the crowd funder for which starts next Sunday 2 November. The completion of both of these plastic kits, could be many months off however. I love this 1540s-1550s stuff by The Assault Group and will keep and eye on the releases for this range as well as there are meant to be more in the next couple of months and I do need some opponents for my 100 or so Tudor Infantry. When I get time I will get some shots of the whole company set out on my terrain board. I am keen to see what they all look like when set out together. 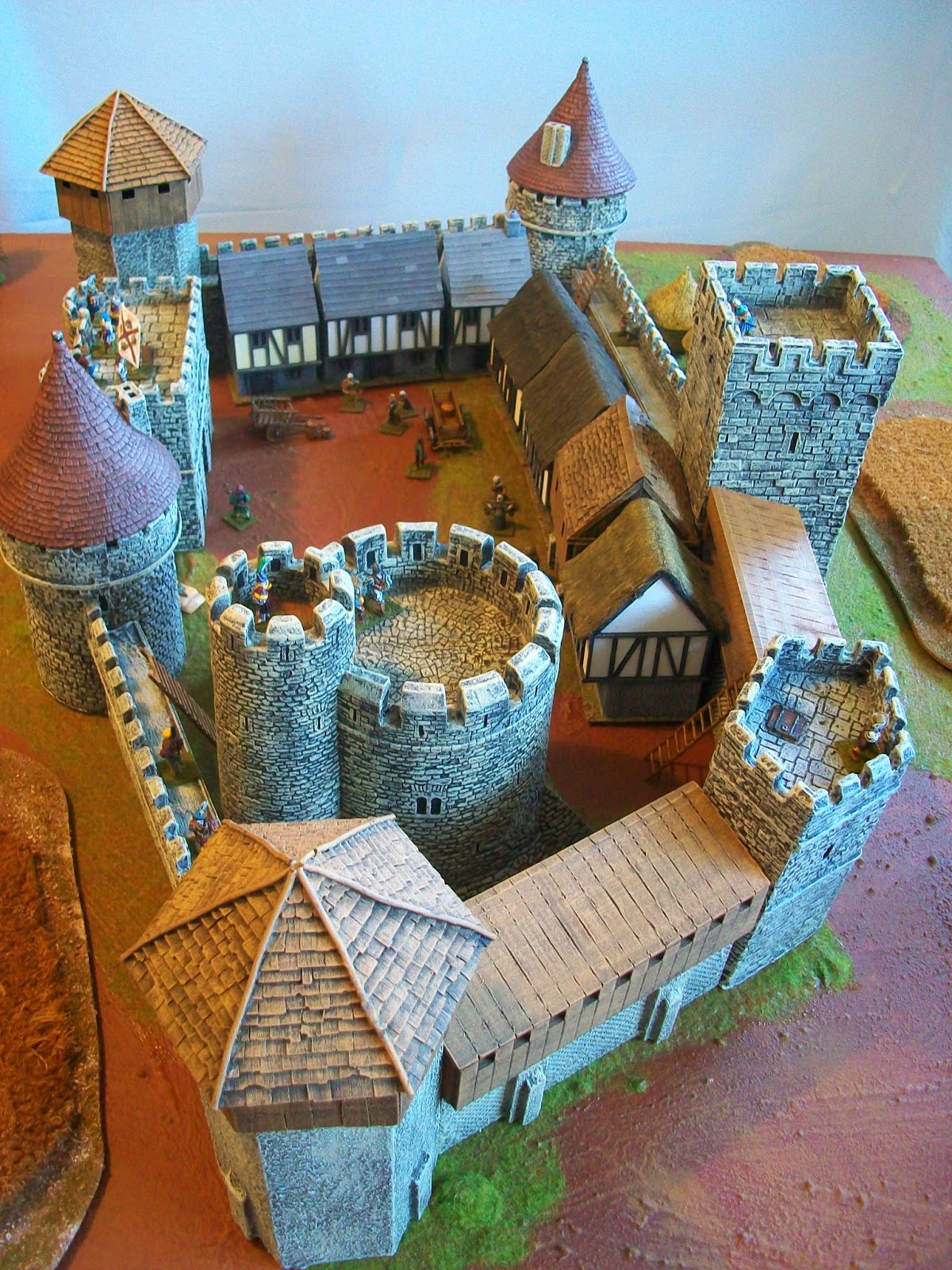 I know I have done a few posts of various castles/town walls recently but collecting and painting up these buildings quickly became a big side project over the summer. Building them is quite addictive as when I think I am finished I always find some other piece that I want to add. My last two fortification related posts showed Italian or Southern European style fortifications. The following pictures are of a more Northern European style. At a glance it probably looks like I have largely used the same pieces which is to an extent true. The large square and pentagonal towers have another outing as do the walls and towers with wooden hoardings, these are all really useful pieces. However the Keep, round towers, uncovered walls and Gatehouse are all different. I did a similar set up to this a few years ago using an old Citadel Mighty Fortress, http://camisado1500s.blogspot.co.uk/2011/10/northern-fortress.html , but I am sure you will agree swapping out the Games Workshop pieces and adding the resin Battleground pieces from Magister Militum really makes a big difference in terms of realism.
A big inspiration for this castle was the great artwork of the 1500s. Maximilian's Weisskunig has loads of dramatic battle scenes which more often than not feature fortifications. I included a few of these images in my original "Northern Fortress" post and indeed the Camisado Blog header is one of these images but I couldn't resist including a few more as they really help set the scene I am trying to create. I have also included a more realistic image by Albrecht Dürer of Innsbruck in 1495. I love the way various spires and towers jut out from these towns, they have an almost organic look to them. I am still on the look out for some buildings with spires to add to my collection so this is probably not the last you have seen of these walls!

One of the big problems I have when painting up these sets is what colour to go for? I want some of the pieces from the two sets, Southern and Northern style, to be interchangeable, which I am aware is probably already a compromise as the colours would undoubtedly have been very different. I think my favourite set of 28mm fortifications I have seen is Simon's beautifully converted Hudson and Allen pieces; http://harness-and-array.blogspot.co.uk/2011/04/verneuil-town-walls.html and http://harness-and-array.blogspot.co.uk/2009/03/fortified-watchtower.html , these pieces look like they have come straight out of a 15th century manuscript! More recently these pieces by TM Terrain have also really impressed me; https://www.facebook.com/Tmterrain/posts/961759350507602 . The plastered walls are certainly authentic, and look fantastic, but I have not got the talent or time to plaster the pieces I have. Saying that the walls I used did have arrow slits in them which I thought was odd as they were only on one side of the walls and the walls are certainly not thick enough for some one to stand in them and still be of any use defensively so I filled these in.
In defence of the unplastered stone walls it seems many castle and town walls were often in a terrible state of repairs and would not have looked as spectacular or impressive as we may imagine. I am currently reading Jonathan Sumption's excellent epic narrative of the Hundred Years War (these are huge books but they are a joy to read) and it seems in the 1340s and 1350s many of the castles and walls of French towns were in a terrible state. For example in the Duchy of Aquitaine the walls of the town of Blaye were inspected in 1337 which "revealed rotting gateways, crumbling masonry, collapsing roofwork, trenches eroded by goats, moats non-existent or filled up with rubbish". Similarly when discussing the walled towns of the provinces of south-western France in the 1340s he describes how "Their walls usually dated from the twelfth century, the last period in which the region had suffered from persistent warfare. In most places the defences followed an irregular course around the circuit of the town, with sharp angles and blind corners. Gaps pierced for paths, chicken runs and houses were hastily blocked up with rubble. The watchman's view was liable to be obstructed by suburban buildings and vegetation, while access to the walls from within could be difficult and slow as the lanes were narrow and blocked by carts, animals and rubbish". While I am well aware that these examples are from a couple of hundred years before the period covered here I do feel they illustrate how easily the fortifications could fall into disrepair, that this was in the 14th century in fact demonstrates the point even more clearly of how walls and towers could be derelict or in need of repair by the 1500s! Certainly by the early 16th century fortifications were often a mix of towers or walls that were centuries old and in various states of repair combined with more modern and up to date additions and renovations. In times of danger suburbs were pulled down, moats cleared and walls patched up, but this would not always mean they looked very good. I have read how as gunpowder weapons came to dominate, crenellations and stone walls would be covered with bedding, sacking and other padded materials in an attempt to stop the lethal hail of shrapnel that could be showered on the defenders when cannon balls struck the stone or brick defences.

So here is the North European castle in its current state. The different crenellations on the walls and rounded Gatehouse, Keep and towers clearly take this out of Italy and more into Northern France, the Low Countries or Germany. The Gatehouse is an impressive, chunky piece of resin and looks suitably formidable. I particularly like the tiled rooves of the two round towers. In fact I am tempted to get tiled rooves scratch built for the Keep, Gatehouse and square towers as well. Please let me know if you have any recommendations or would be interesting in doing this for a suitable fee as I would love to have rooves made for the whole thing, it would really make it look the part.
It's a relatively peaceful scene of some wagons and a guard of light horsemen arriving at an Imperialist Castle which is held by a garrison on Landsknechts. The garrison captains talk with the horsemen from the Gatehouse roof as they prepare to open the gates. The buildings inside are all scratchbuilt ones I bought off Ebay years ago. I think they go nicely inside the walls. The Keep is from Hudson and Allen, round towers, tall rooves, Gatehouse and walls are by Battleground and the hoarded towers and walls were off Ebay. Of course the tricky question now is how on earth do I convincingly model a moat?