1513 Invasion of France: Border Horse, Tudor Archers and The Battle of the Spurs 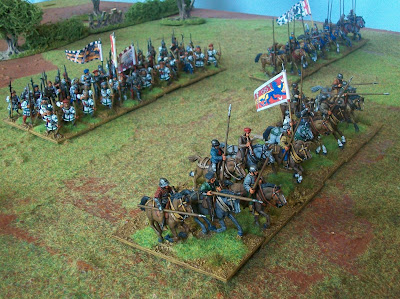 I have been up to a few Tudor related activities over the past few months (if such a thing can exist!) so I thought I would put them all in one Tudor post as they all kind of link together. Firstly when I visited Stuarts at the end of April he was kind enough to show me how to sculpt the green stuff sleeves onto his new "Tudor Dollies" that he is having cast up. These can be used in conjunction with the Perry Wars of the Roses plastics to make fantastic early Renaissance figures.

While Stuart has shown what can be done with them as billmen: http://stuartsworkbench.blogspot.co.uk/2017/05/painted-tudor-dollies.html, below is one made up as an archer. I didn't sculpt those sleeves (I am yet to make an attempt) and green stuff hair needs to be added to the minature along with a sword and some arrows. I think you will agree the dollies work really well. I have put an order in for some but am still not sure whether they will end up as Archers, Billmen, French Aventuriers or possibly a few as Artillery crew, they certainly open up lots of possibilities. Details of how to order these can be found here: http://stuartsworkbench.blogspot.co.uk/2017/05/tudor-figures-available-for-pre-order.html. The orders are being taken before the 1st June.

Whatever English troops I choose to make the Tudor Dollies into, they will be joined by the Border Horse or Northern Staves that I finished this month. They were made using one of the Perry Miniatures Light Cavalry Wars of the Roses boxed sets along with various other bits and pieces. While we don't have many surviving images of Border Horsemen in 1513 we do know that they made very effective light cavalry, especially when fighting in France rather than on the Scottish Border. On the Border it seems there was a strong suspicion that their local feuds and loyalties took precedence over the national campaigns that they engaged in.

A possible image of a Border Horseman from around 1513 is shown below in John Skeltons, The Ballad of the Scottish King. He is armed in a simple helm with a brigandine and leg plates. This is the style I have tried to capture in the figures shown below. From the later sixteenth century we have a much clearer image of the cavalry of the Border as they became notorious as Border Reivers. I have tried to avoid anachronism but have added studded targes to many of the figures and have also depicted a couple with St Georges crosses painted on their targes. Light Horsemen, that could be Border Horse, are depicted carrying these in Derrickes Image of Ireland of 1581. This obviously dates from a lot later that Henry VIIIs 1513 campaign so I have only included a couple of these painted targes for flavour. It is certainly possible that they were used.

The Border Horse were notorious as raiders and reivers along the Anglo-Scots border, being accustomed to hit and run attacks and ambushes. They used a wide variety of weaponry in this style of warfare and to reflect this one carries a light crossbow, known to the borderers as a "latch", while another carries a bow across his back. Most of them wear sewn on St Georges crosses to show they are part of the English Army. These are made of paper and glued on. When campaigning on the Northern Border of England these national markings had a habit of coming loose when the horsemen wished to disappear or maybe even change sides! For this reason only the Standard bearer is in any specifically "English" coat of white and red, the others are fairly drab with only the sewn on crosses to demarcate their allegiance. I wanted these chaps to look like veterans of a fair few border raids. They are not interested in gaining honour by breaking spears with the French but more intent on ransoms and plunder!

To further reflect the raiding and plundering nature of these troops I have added a couple of hunting dogs to some of the bases. These are from the Hunting Dogs that Simon of "Je Lay Emprins" had made a few years back: http://je-lay-emprins.blogspot.co.uk/2014/06/release-hounds.html. They fit in really well with these "Northern Staves", as the Border Horse were also known. The group in the images below ride under the Standard of Henry Percy, Earl of Northumberland. A northern magnate who would have been able to call upon the services of such men for his retinue in France. The flag is from Petes superb Tudor flag range that he has painted to represent commanders of the English army that went overseas in 1513: http://thegreatitalianwars.blogspot.co.uk/2016/08/earl-of-northumberlands-standard-bearer.html, I really cannot recommend these flags highly enough.

Below are some photos of the whole unit of Border Horse as well as some of the individual bases to show the detail. Of course I could not resist the opportunity to get out the English collection so far and take a few snaps of them all together. With Stuarts new Tudor dollies on the way I think I will certainly be adding to this force. Of course at some point there will be some photos of the English combined with Maximilians Auxiliaries; the Landsknecht Pike and Burgundian Heavy Cavalry that bolstered Henrys forces during this campaign.


Finally I was lucky enough to pay a visit to Hampton Court recently. It was fascinating to see the Tudor Kitchens, Great Hall and Chapel all dating from the 1520s-1530s. Of relevance to this blog is the fact that the palace houses two of the paintings that depict Henry VIIIs Campaign in 1513. The first depicts the meeting of Henry VIII and Maximilian in the foreground, with Maximilians Landsknechts above this and then the Battle of the Spurs or Guinegate above them. At the very top can be seen Tournai on the left and the siege of Therouanne on the right. What interests me in this picture is the depiction of the two towns at the very top, 16th century fortifications always fascinate me. The fact Maximilians Men-at-Arms are nearly all wearing sallets is also interesting considering this painting is from 1513. It shows they were still very much in vogue at this date, unless of course Henry was trying to have his retinue depicted as more fashionable than Maximilians, which could also be a possibility.


The second painting depicts a somewhat idealised image of the Battle of the Spurs in the foreground with the English camp and Therouanne in the distance. Of note in this picture is a mounted archer firing from horseback amidst the melee of Men-at-Arms! The walls of Therouanne are nicely depicted and remind me of the modeled walls we gamed in front of at Stuarts a few weeks back. It is with future games in mind that I have been working on a few bits and pieces that should hopefully be finished by next month.