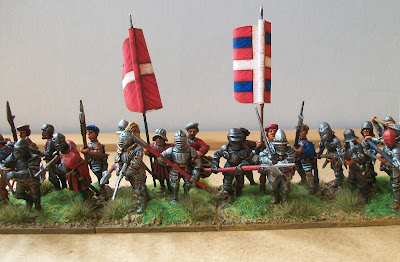 For my latest unit I have attempted to create a set of figures that represent infantrymen armed with polearms for the first quarter of the 16th Century. As I have often talked about on this blog it is the Landsknecht and Swiss, or Reisläufer, that get most of the attention in 16th Century Art and we rarely find depictions of all the other types of infantry who we know from the sources also fought in this period in large numbers. For this unit I wanted to create a set of troops that could pass muster as English, French or Scots. At a pinch they could also do as Spanish although they perhaps have more specialist infantry while similarly the Italians are quite different and I have covered them already: http://camisado1500s.blogspot.co.uk/2015/11/italian-infantry.html. I am aware that regional differences would have been important in this era so for example even within the "French Infantry" you would have Gascons who may well have looked very different to the Picards but we simply don't know in what way they differed.

I have posted up some depictions on these perhaps less "glamorous" infantry to give an idea of what they may have looked like. Using these images combined with remaining pieces of munitions armour from the early 1500s it possible to build up an idea of how such troops may have dressed and armed. With regard to the armour I would recommend "The Medieval Armour from Rhodes" as it is superb for highlighting armour that was in use at a particular snapshot in time; https://www.amazon.co.uk/Medieval-Armour-Rhodes-Large-Monograph/dp/0948092416. Rhodes fell to the Ottomans in 1522 and this collection of armour was discovered there in the 19th Century. The collection is a fascinating mix of pieces from all over Europe ranging from mid 15th Century armour to pieces that would have been very new at the time of the second Turkish siege. It seems that this was some of the armour that was being used by the defenders, and often mixed and matched, during the siege. Of course the force defending Rhodes was fairly international in its composition but we know from Elis Gruffydd that the Calais Garrison was similarly international in it's make up as were the armies serving in Italy in the 1500s so there is no reason to doubt such variety of armour was not seen in other forces. If you can find this book I would certainly recommend it.

By 1500 munition quality armour had become common place and from the collection of images shown here it seems clear that in the early 1500s plenty of armour was worn by infantry of the various European nations. It's often easy to think of an era where gunpowder weapons were in the ascendance as one where armour was becoming worn less and less but this is far from the case. By the mid 16th Century, when the size of armies had grown to unprecendented levels, more armour was worn, "Corselets" being a term commonly used to describe Pikemen by the Mid 1500s. For this unit I was trying to depict troops from the early 16th Century who were not quite as uniformly equipped as later 16th Century infantry would be, or were at least meant to be.

The images show a lot of plate armour, often still very similar in style to that of the late 15th Century as in "Le Voyage de Gênes", the Crusaders at Damietta in the 1522 edition of Breydenbach, both shown above, and in "The Nancéïde", shown below. Relatively basic munition style armour is also shown as in the Jan Joest and Gerard David images, also both shown below. As a word of caution I would add that soldiers from Biblical scenes in this period are often depicted in quite "fantastical" or "ancient" armour, or at least a 16th Century idea of what ancient armour might be. Sometimes they appear in a mix of both contemporary and fantastical. This should be borne in mind when looking at these works for evidence of how they dressed. That being said the armour shown here doesn't seem particularly fantastical in any way.

Unfortunately just as in the contemporary art it's the Landsknecht and Reisläufer that get all the attention the same is true for miniature manufacturers! There aren't really any miniatures that look like the soliders depicted in the art work above, well not a speficic range at least. There are however plenty of individual figures as well as bits and pieces that can be used to get something close to how these infantry may have looked.

The below photo shows the unit before it was painted up. I used figures and parts from Steel Fist Miniatures, Wargames Foundry, Warlord Games, The Assault Group, Mirliton, Perry Miniatures and Stuarts Tudor Dolls to put it together. In fact I think the unit may have taken longer to build than it did to paint if the time taken to see what worked and what didn't is taken into consideration! My skills with green stuff are still very basic so I was limited by the figures to how closely I could get something resembling an early 16th Century infantry unit. It was a similar situation when I worked on my generic pike, http://camisado1500s.blogspot.co.uk/2016/02/picard-pikemen.html, a couple of years ago. Since then the addition of the Steel Fist casts, specifically the 16th Century Foot Knights, late 15th Century Munition Armoured Swiss Front Rankers, https://www.steelfistminiatures.com/product/lm10.-swiss-front-rankers./, and a couple of carefully selected figures from their Landsknecht range as well as Stuarts Tudor Dolls, https://www.steelfistminiatures.com/product/wfd-10.-tudor-dollies/, have meant I have been able to get closer to the look I wanted than was possible when I worked on the pike blocks.

So does it work as a convincing unit of early 16th Century infantry? I will leave that up to you to decide. The unit has a mix of late 15th Century armour, a lot of which I have left black to further demonstrate that it is of munition quality while some of the soldiers wear 16th Century armour and helmets. The elaborate and shiny early 16th Century harnesses have been reserved for the units leaders. The early 1500s style "base coats" are well represented thanks to the Tudor Dolls and figures from The Assault Group. The contemporary art work shown above clearly demonstrates that these coats were a feature of dress for many soldiers of the early decades of the 1500s. The various 1500s caps and hats also help to define the unit, again these can be seen in a lot of the images above.

For polearms I tried to use a many different variants as possible but avoided Bills. These seem to have been a particularly, though not exclusively, English or Italian weapon and while I could have included a couple I decided against them. My reasoning for this is that I will probably do a very similar unit to this one that will be specifically English Levied Billmen who will be carrying Bills of various varieties and wearing the St Georges cross. I have also included Brigandines, these can be seen in use in the Jean Marot image above, and some padded jacks for the less well armed members of the unit. The padded jacks are particularly suitable for using these troops as Scots or English as they were worn in the British Isles into Elizabethan times.

The photos show how versatile these troops can be, with a simple swap of the flags they are French, Scots or English infantry. They should also work well bolstering the ranks of my generic pikemen and the two command bases could be used in lots of different units in my collection. I was initially somewhat disappointed with the finished unit though, as all the forward pointing polearms make it very difficult to put one base behind the other and I felt that they were perhaps simply too generic and as such not that convincing. Once they were finished I painted up a couple more bases of 16th Century Archers, to give me three units of Bowmen for Lion Rampant, these can be seen in the last two photos. When added to the polearmed troops and under the English flags they help to make quite a convincing English unit despite the fact the figures are so generic and none of them even carry Bills. This has restored my confidence in the unit and I think once placed with the rest of my collection they will work well. I also have a feeling that because they are so generic they could be seeing an awful lot of action on the gaming table!