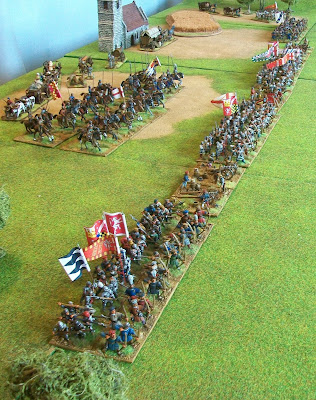 Perhaps not the most inspiring title for this post but over the Summer, while I had some time off work, I had a look at the army I can now muster for the English at Flodden. The beauty of this set up is that aside from the flags, which I specifically collected or printed out to represent some of the English Leaders at Flodden, most of the rest of the army is made up of figures that I already had for other projects. The white coated Bill and Bow and the Border Horse were painted for the English that campaigned in France in 1513. The unliveried archers are fairly generic and have been fielded as Frenchmen or "Rebels" in my games. Similarly most of the guns and some of the polearmed troops are also generic but really look the part here when fielded under the English Banners.

I have only included a few of the Banners and Standards that were carried at Flodden, many of the English Nobility and Gentry from the Northern Counties and the Royal Fleet took part. What I have done is included the Banners of the leaders of each of the English "Battles". So we have the Earl of Surrey and his two sons Thomas Howard, the Lord Admiral, and Edmund Howard who struggled in the opening stages of the clash ( my previous blog post covers this). In charge of the reserve is Lord Dacre and his Borderers while sir Edward Stanley takes the English left flank.

As many collectors of this period will know, although there are bits and pieces here and there for the Flodden Campaign, no manufacturer really covers it in depth and does it justice. Perhaps one day this will be rectified. Despite this I hope these pictures demonstrate that with a careful selection of figures and some conversion work a convincing Flodden English Army can be put together. The figures used here are of course plenty of the Perry's Late Medievals, some Wargames Foundry Wars of the Roses Infantry and Landsknechts, lots of converted Assault Group figures, some Steel Fist dismounted Men-at-Arms, Stuart's Tudor Dolls and a fairly large number of Old Citadel figures. I think there are nearly 70 of the Old Empire Archers from Citadel that were sculpted by the Perrys in the 1990s! The flags are a mix of Pete's Flags, Freezywater and even a few home print outs. I have Ray Rousell to thank for the home printed ones: https://onelover-ray.blogspot.com/search/label/Flodden%20flags.


As the Summer is now over I thought you may like to see the developments in my Reenactment "Kit" for this year. I took part in an event every month from June through to September which is pretty good going for me. One of these was an event to commemorate Stoke Field at the Wargames Foundry which was a strange collision of both of my hobbies in one weekend, although they obviously overlap in many ways. While my wargaming collection is very much geared towards the 16th Century I indulge in my passion for the later 15th Century through my reenacting.

In terms of my armour the brigandine that I ordered last year has been completed by Ash of Armour Services Historical: https://www.armour-services-historical.co.uk/. It is based on the brigandine worn in Hans Memling's Beheading of John the Baptist and I think you will agree is a bloody good replica of the one worn in the painting! Over 400 rivets have been used in it to create the look seen below. It also has accompanying laced on "Spaulders" which are not worn in the original painting but were widely used in the period. The Pastrana Tapestries, depicting the Portugese King Alfono V's victories in North Africa and made in Flanders, contain many great representations of lots of brigandines with spaulders being worn, I have included a detail from this below.

Anyone that has painted the Perry Late Medieval Plastics will be interested to know that the the "studded" effect on the miniatures wearing brigandines is an attempt to try and represent the rivets seen here. One of the Light Cavalry Plastics even has the brigandine spaulders as well. It is a stunning piece of armour and I am very pleased with the final look it gives when worn with my maille and other pieces of armour. I am trying to create a look that could be straight from a Late 15th Century Illustration rather than looking like a "reenactor" and I feel I am getting closer to that goal with this.

In terms of my "civilian" style 15th Century "kit" I feel I have also moved closer to my goal of trying to look like someone who has stepped out of an art work or manuscript. Last year my "Mahoitred" doublet was completed. Mahoitres are the puffed shoulders which make you look like the incredible hulk, with a much bigger physique than you really have, when a coat or gown is worn over them! My doublet is based on the executioner's one in the Dieric Bouts Altar Piece, the detail of which is shown below. To complete the look I added a "Sleeveless Livery" or vest to this. I am not sure these garments really have an official name but they are basically a skirted vest that covers the points that fasten your doublet as well as your cod piece and backside. Those of us used to painting Landsknechts will be familiar with all sorts of scandalous attire but in the late 15th Century you were not considered fully dressed if simply wearing doublet and hose.

Of course there were all sorts of occasions when doublet and hose would be all that was worn, context is always key, but in terms of formal attire a coat or gown would normally be worn over the doublet, the doublet essentially being a foundation garment. If it was too warm to wear a full gown or coat, or perhaps the arms needed to be more free for movement, then a sleeveless version like this could be worn. Initially these items of clothing seem strange but when you take the time to have a look at the art of the period they appear all over the place. Many of you will note the similarity to the military style liveries worn over armour in the late 15th Century and the civilian ones are indeed very much the same. Whether or not the civilian ones were always in a Lord's colours like the military vests seems more open to question. There are lots of images of these, a few of which I have shown below, and it seems that while some may have been in a Lord's chosen colours in others they seem to just be another civilian garment. They may equally have been in the colours of a guild or fraternity rather than have been in the colours of a particular household, it's hard to say.

The finished look is shown in the last image below, I am sure next year I will want to tweak and change it again! As with my miniatures the reenacting is always a work in progress and the idea of ever completing an outfit doesn't really seem likely. Turning back to the miniatures I am currently working on yet another block of Landsknechts for the 1530s to 1550s this time. I am not sure I will have them ready by next month but they are on the way.