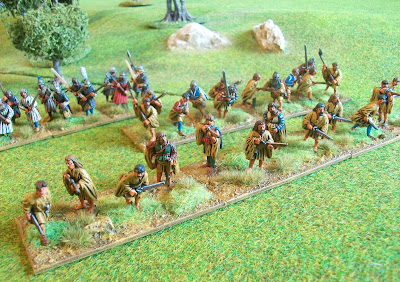 Hobby wise this year has started the same as last, with more work on my Gaelic Irish army. I have completed some of the slighty later released Perry Irish from their Wars of the Roses range, we just need Michael Perry to finish the Irish cavalry! I was also inspired by Simon Chick's clever conversions of some of the Perry Miniatures Galloglass, https://leadadventureforum.com/index.php?topic=109822.30, using the Steel Fist Miniatures Landsknecht heads and was keen to have a go at some myself. This is probably the third idea of Simon's I have shamelessly taken for my own collection!

With regard to the heavier armed and armoured Kern and the handgunners I have done very little conversion work. Sculpting a few beards and moustaches onto some of the figures is all I have done to add variety to them. With regard to the handgunners Ian Heath, in his Armies of the 16th Century, states they were first recorded in Ireland in 1487 and were supposedly used in Knockdoe in 1504. When the English employed Kern to fight in Scotland and France in the 1540s some were armed with guns so these figures will be useful as mercenaries for my Mid-16th Century Tudor army or alternatively as enemies for them during the conflicts the Tudor Government had with the various Anglo-Irish and Gaelic Lords in the 16th Century.

The heavier armoured Kern are great sculpts and I am particularly impressed by the fact one of the figures has an armoured arm similar to the dart wielding figure in the Códice De Trajes, shown below. It's a mystery how this armour would have been worn securely but it's nice to see that attention has been paid to the historical images. A Kern in another image from Henry VIII's reign also wears some form of gauntlet and is shown in my original post on the Irish: http://camisado1500s.blogspot.com/2018/01/of-kerns-and-gallowglasses-is-supplied.html, from the start of last year.

When it comes to the Galloglass I spent a little more time converting these using a variety of heads from both the Steel Fist Landsknechts and the Warlord Games Plastic Landsknecht kit.  The eagle eyed amongst you may also notice I swapped a couple of the axes as well, changing them for a couple of Galloglass axes I discovered I still had from the old Vendel Miniatures range of Gaelic Irish, now no longer available. I thought this was a nice link back to my first attempt at a 16th Century Irish army which has long since been sold on Ebay.

After a few of these headswaps the figures become even more evocative of the fantastic Dürer image shown below. As a quick digression, since my original post on the various types of Irish infantry, I have come across an interesting theory on this image. As this work is dated to 1521 it is likely that it was completed while Dürer was in Antwerp. Irish style swords were made in Germany and exported from Antwerp and Irish "Brats", the warm cloaks they wrapped themselves in, one is worn by the central figure below, were imported into the European mainland via the city so these items would have been available in Antwerp at the time. During this period Antwerp was famed for its processions at civic festivals where the citizens dressed as different foreigners and Dürer is known to have dressed up a young German as a Native American Indian for another piece.

This then brings up the question as to whether the image was based on genuine Irish soldiers, which it of course could be, or was it based upon some of Antwerp's citizens having fun and dressing as the Gaelic Irish! If they were genuine Irish troops from 1521, which wars were they serving in and how common were they on the mainland? Gaelic Irishmen certainly fought in the Dutch Revolt towards the end of the century but were they a presence much earlier? I quite like the idea they may not have been Irish at all but the Flemish in fancy dress! Or maybe they were drawn from a description given to Dürer. Who know's what the truth is but I always find these kind of questions fascinating when looking at these images from the past. I couldn't find the actual article which goes into detail about this but it is listed here: http://www.openbibart.fr/item/display/10068/1073027.

Until those Perry cavalry make an appearance that is probably it for the Irish for now.  Finishing a few bits and pieces to round off my 1540s collection and accompany my recently finished Landsknechts is next on the agenda.