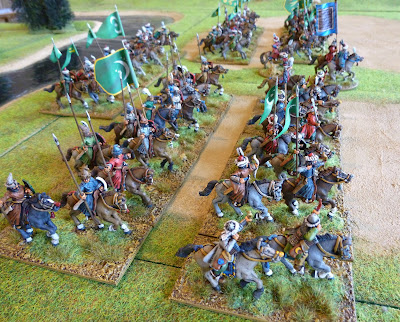 Another part of the Ottoman army has been completed in the form of two units of Balkan Cavalry. The first are Balkan horsemen who seem to have made up a sizeable part of the Ottoman Army during campaigns in Eastern Europe in the late 15th early 16th century. Ian Heath makes an interesting argument in his "Armies of the Middle Ages" that late 15th century sources which are supposedly depicting Turks are more likely often depicting various Balkan peoples with some witnesses mistaking various Albanian, Wallachian or Hungarian horsemen for Turks. This is further supported by the fact that the Akinji were more often than not archers whilst sources depict these "Turks" as lancers.

The three images below give a good indication of this confusion, with troops in Balkan headgear fighting side by side with Turks wearing turbans. Heath used the first image, from the Obsidionis Rhodie Urbis Descriptio of 1496, for his depiction of Balkan Cavalrymen which the Old Glory sculpts used in this unit have clearly been based upon. The unit is a mix of Old Glory Balkan light horse and converted Old Glory Delis on Assault Group Horses with the captain figure being a converted Assault Group Akinji. I haven't given these chaps Ottoman pennants on their lances as I want the option to be able to use this unit in Christian armies as well. Keeping with the auxiliary theme of the horsemen a variety of shields have been used for them, with more western heraldic imagery on some to indicate their non-Turkish origins. They are a really useful unit and will make great additional Stradiots if needed.


These Balkan troops remind me of two of the horsemen in Dürer's classic woodcut of 1498, the four horsemen of the Apocalypse. It is interesting that he chose to depict two of the horsemen in Eastern European style headgear, with one carrying a composite "Turkish" bow. Following the fall of Constantinople in 1453, an Ottoman invasion of Italy in 1480 and with 1500 looming, which served to enhance the eschatological beliefs of many Europeans, it is tempting see Dürer perhaps hinting that the Ottomans may be agents of a coming apocalypse? This is just an idea and of course it gives me an excuse to include an obligatory Dürer image in the post!

The second auxiliary unit is of fearsome Delis, light cavalry that were first raised in the late 15th century. Initially being comprised mainly of converted Serbs, Bosnians and Croats they came to form something of an Ottoman elite force. I have seen their name stated to mean daring, brave, fearless or as a corruption of the word for "guide", contradicting information as is often the case when researching the Ottomans! What sources agree more firmly on is that they regularly formed a vanguard force in Ottoman armies as well as providing a bodyguard for the Ottoman Beys who ruled the Eastern European provinces.

They were famed for being quite terrifying in appearance. They certainly would be for any of the local wildilfe as they sported eagles wings on their shields and headgear as well as draping themselves and their horses in all manner of animal skins, leopards and lions being some of the more exotic. This seems to be a precursor to the outlandish dress of the later Polish Winged Hussars and I am guessing they may have been an influence on them. I have not been able to find any images of them for the late 15th early 16th century, the era my Ottoman force is initially going to be aimed at so the earliest I can find, shown below, is from the 1570s.

A mixture of Assault Group and Old Glory figures were used to build this unit, all mounted on Assault Group Horses. I have made some headswaps on a few of the Assault Group figures as I felt that some of them looked a little too 17th century for me. Their large brimmed hats have been swapped for fur ones. They are a really interesting unit and add some great variety to an already colourful Ottoman army.

Finally I couldn't resist a few pictures of all the light cavalry from the army. Quite a fearsome raiding party! The auxiliaries and Ottoman Akinji go really well together, helping to create the feel of some of the contemporary images shown above. Hopefully I will be able to get some photos of the whole Ottoman force up in a couple of months but first there are some more bits and pieces to get done for the army, including the war wagons.