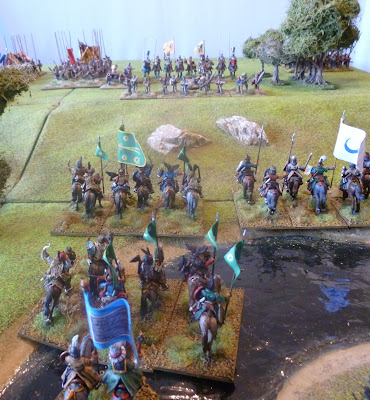 Keen to test some of my Ottoman cavalry on the table top Stuart and I took a break from our series of English, Scots and French clashes and pitted some of his Imperialists against a horde of akinji raiders in a refight of the running battle that was Leobersdorf, 1532.

The Battle of Leobersdorf, September 1532.

Three years after the failed Ottoman siege of Vienna in 1529, Suleiman the Magnificent's forces again crossed his western border in strength. Vienna was not reached, the main army being held up for too long by the heroic defence of Güns in August. In conjunction with the main assault an akinji raid of 8,000 Turkish and Moldavian light horse under Kazim Bey raided into Austria. Learning of the retreat of the main Ottoman force Kazim Bey found two of the possible three valleys he had intended to withdraw through had been deliberately blocked by simple field fortifications. An Austrian force under Sebastian Schertlin von Burtenbach followed his movements and he was driven into the third escape route only to find his path blocked by 20,000 landsknecht, 1,000 men at arms and 1,000 Hungarian hussars and light horse under Count Frederick II of the Rhine, Count Bálint Török, Pavle Bakić and Johann Katzianer.

Count Bálint Török, Pavle Bakić and Johann Katzianer were seasoned commanders in the wars in Hungary, all having been present at Mohacs in 1526, where Bálint Török was in command of the late Louis II's bodyguard. Török had commanded Hungarian forces at the Habsburg victories of Tarcal and Szina, in 1527 and 1528 respectively. Johann Katzianer, also present at Tarcal and Szina, commanded the Imperial light horse at the siege of Vienna, 1529. Due to the nature of the akinji raiding the Habsburg force comprising mainly of slow moving landsknecht and men at arms with artillery support could still have been avoided by the Ottomans. The presence of these veteran captains with their hussars ensured this didn't happen. The raiders were trapped and destroyed, many getting stuck in marshlands as they tried to escape. Kazim Bey fell in the action, his sword and turban being sent to Charles V as a symbol of the victory.

The objectives for this game were really straightforward.  By taking his force the length of the table the Ottoman player had to try and escape with as many units as possible and leave via the Habsburg and Hungarian table edge. The Habsburg player had to stop as many of the Ottoman units by routing or destroying them. If the Habsburg forces could prevent Kazim Bey from escaping then the victory would be even greater.


Predictably the action started with the Ottoman cavalry surging forward towards the other end of the valley. The Hungarian light horse, comprising the hussars, under Pavle Bakić and Johann Katzianer, and a unit of horse archers rode out to meet the advancing Turks and Moldavians. Brave though this action may have been the Hungarian cavalry soon found themselves outnumbered by swarms of skirmishing horsemen. It was not long before, one by one, the Hungarian units were defeated giving the Turks a clear path to the waiting Habsburg forces.

Whilst this swirling cavalry engagement took place in the centre of the valley the landsknecht officers moved their men into position at the top of the hill. Sensing glory and a chance to avenge his previous King's death Bálint Török led his gendarmes down the slope knowing that he would be able to wreak havoc amongst the Ottoman horsemen if he could reach them.Unfortunately for this veteran they managed to evade his heavily armoured men at arms and, like the hussars and archers before him, he was defeated.

Flushed with the victories over the hussars and Török's gendarmes Kazim Bey's horsemen made for the rest of the Habsburg forces. As they attempted to crest the higher ground and escape the valley they were met by a hail of shot from the landsknecht arquebusiers. Count Frederick's artillery opened fire hitting Kasim Bey's deli bodyguards and succeeding in bringing the Turkish leader down. The Ottoman host waivered but they knew there was no other way out of the trap and pressed on.

With their leader dead it was every man for himself amongst the akinji and they continued to launch fierce attacks against the landsknecht at the top of the slope. The arquebusiers were sent running as the horse archers rode closer, launching showers of arrows at them.  Some of the landsknecht pike blocks were then driven back as the akinji drew nearer. A unit of Moldavian horsemen looked as though they may make good an escape only to be charged by Count Frederick II of the Rhine himself and his heavily armoured gendarmes who quickly cut off their attempt.

With the drums beating loudly on both sides the fighting intesified at the crest of the slope. Many of the landsknecht pikemen fled as the akinji galloped around them and picked them off with their archery. Those akinji that were unlucky enough to be caught by the German pikes were soon defeated or sent fleeing back down into the valley. It looked as if some of the Ottomans would make it through but the culverin continued to take it's toll on the Turks and with the arrival of fresh arquebusiers Count Frederick II was able to reorganise his defensive lines. The escape route remained sealed and Kazim Bey's host failed to escape the valley it had been ambushed in.

I really enjoyed this game as it was so different from the other encounters we have played out. The two armies were very different and this made for a real spectacle on the tabletop. It was great to use the Ottoman and Hungarian horsemen and see them in action. I am keen to explore more of these clashes between the Habsburgs, Hungarians and Ottomans in the future.