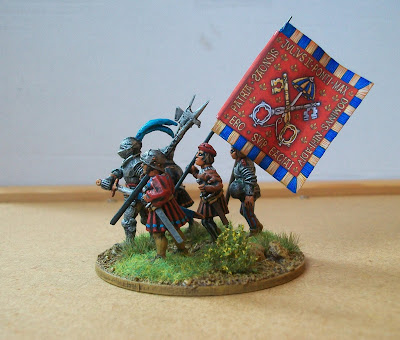 This is probably my last post for the year. I am currently gearing up to start the challenge of yet another massive pike block, this time the excellent Landsknechts that The Assault Group have released for the 1490s to the first decade of the 1500s. A glutton for punishment I may be but I can't wait to see what they will look like painted up and arrayed under the ragged saltire of Maximilian! I am also about half way through some Tudor Archers to accompany my 1513 billmen, they should hopefully be completed first.

As a bit of a break in between bigger projects I have painted up a couple of the Steel Fist 16th century dismounted knights that came from a recent Kick Starter. The first is shown here on a command base. For this little scene I was keen that the figures could be used for my very early Italian Wars armies, for the War of 1499-1504, so you will notice that none of the figures are in later Landsknecht style slashed and puffed clothing. While the slashed and puffed clothing was indeed worn at the very start of the 16th century, it was done in a different and less extreme fashion than that which was to develop in the 1510s. As far as I know the harness the man-at-arms himself wears would be state of the art for 1500, some of the other figures for this range are for a few years later. These figures are all now available here: http://www.steelfistminiatures.com/products/16th_century_knights. I also backed the Steel First mounted 16th century knights Kick Starter and look forward to painting them up some time next year.

The other figures on the base are by The Assault Group apart from the chap at the back wearing a grey hat, who is a Perry plastic figure. The banner is interchangeable, so I can use the base for various commanders up until the mid 1520s, but in these pictures they march under a conjectural pattern bearing the arms of the "Warrior Pope", Julius II. They are from one of the excellent sets that Pete has done for Julius IIs armies: http://thegreatitalianwars.blogspot.co.uk/2014/04/papal-flags-of-julius-ii.html. I think at some point when I have prepared all the Papal banners and standards part of my collection may have an outing as an entirely Papal army, this time Della Rovere rather than Borgia. I am yet to photograph my Italian Infantry and more generic pike blocks in a big army set up.