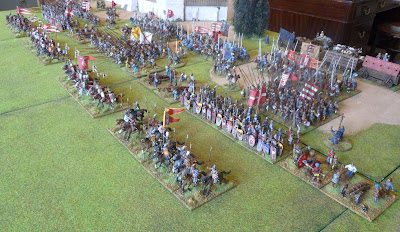 Here are the early 16th century Hungarians I have been working on for the past few months. The photos of this army make a fitting post for the 10 year anniversary of the blog as they include figures that I have only just finished working on alongside figures from the first Camisado post in 2011, http://camisado1500s.blogspot.com/2011/05/descent-into-italy.html. When I started the blog I was wondering if I could manage at least one post a month for a decade and he we are 10 years later. I guess blogging is already obsolete as a popular form of media but there are still endless scenarios to game and units to try and recreate so hopefully a few posts still to come.

The army is a combination of  The Assault Group, Perry, Steel Fist, Pro Gloria (now sold by Warlord), Eureka, Wargames Foundry and Old Glory figures although there are a few other manufacturers here and there. The pavise infantry and hussars have been heavily converted but many of the other units have also had head swaps or other changes. It's an interesting army combining some of the early 16th Century favourites, such as the landsknecht and gendarmes, with more unique and unsual troop types such as the Bohemian infantry, Hussars, Horse Archers and Balkan auxiliary cavalry. Hopefully one day a figure manufacturer will make a dedicated range. Of course there are other units I would like to add, converting some Wallachian horsemen with tall fur hats would be fun. I never consider any of my collections as complete.

With regards the landsknecht I have been searching for sources confirming how many were actually at Mohacs in 1526 and how widely they were employed by the Jagiellonians. From what I have been able to find if there were any they were probably in small numbers. Oman, a dated source I know, states that at Mohacs there were 5,500 veteran foreign mercenaries but doesnt state where they were from. Tamás Pálosfalvi's "From Nicopolis to Mohács A History of Ottoman-Hungarian Warfare, 1389–1526" states that the majority of the Hungarian infantry of this era "were not Swiss- or Landsknecht-type infantry armed with pikes and halberds" which does make me wonder whether landsknecht pike blocks in the Hungarian army of this period are something of a "wargamer myth"? Gyozo Somogyi's "The Army of King Matthias 1458-1526", which has been a great source of pictorial inspiration for this army, includes a couple of landsknecht amongst the colour plates but as this is purely a book of images gives no further details. I would be interested to know how common landsknecht really were in the Hungarian forces of the 1520s?
The photos are all below. It's an army that when I started this blog a decade ago I never imagined I would attempt to collect. Over the past 10 years the blog has covered early 16th Century Spanish, Imperialist, French, Venetian, Scots, English, Irish, Ottoman and Papal armies as well as various rebel forces that have often been a feature in the wargame write ups. I think some interesting peasant forces to game Tudor rebellions and the German Peasants War could be a future avenue to explore along with building up my Gaelic Scots and Irish to a level where I can stage refights of battles like Knockdoe, Glentaisie and Farsetmore. More units to cover the Hungarian and Ottoman border wars offer plenty of further scope for exploration as well. It never ends does it! Thank you to everyone who has commented and supported Camisado and here's to another 10 years!