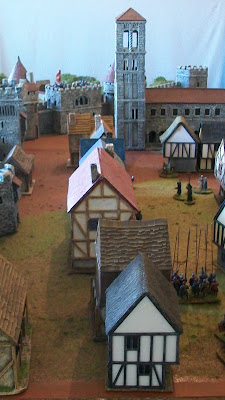 At the start of last month Stuart of Army Royal, http://stuartsworkbench.blogspot.co.uk/ , visited me and we continued our clashes set in Northern France 1513. We had a mammoth gaming session over three days playing four different scenarios and using the Lion Rampant 16th Century rules that Stuart has been developing, with some occasional suggestions from me. It was great fun and I think we really made some progress on rules for mounted longbowmen and the use of artillery in the skirmishes.

I didn't record exactly what happened in each game as it would have been a nightmare and slowed everything down. For example the second game we played was quite complex and involved relief forces for both armies joining the game later on under new captains. Recording everything that happened in that game alone would have been a big task. I did take lots of photos though, so I have decided a brief summary of each game and then some photos should be enough to give a flavour of them. As in previous games the pictures weren't posed and the light wasn't always great, especially as a couple of the games went on quite late, so apologies in advance for this. It's a picture heavy post but they were great clashes and I wanted to post up as many images as I could.

For our first game we wanted something we could jump straight into as a bit of a warm up and to get familiar with the rules again so we decided to play the "Convoy" scenario that I had played through before: http://camisado1500s.blogspot.co.uk/2017/07/the-convoy.html . The only slight differences were that we substituted one of the French Ordonnance Archers armed with Lances units for French Ordonnance Mounted Archers and that we played with units of twelve or six figures rather than scaling up, although this figure numbers change had no impact on the actual game.

I think I had a bit of an unfair advantage in this one, having already played through the scenario before. Stuart took the French, keen to give his new Mounted Archers an outing and I played the English. I remembered that when I played it before the Burgundian Men-at-Arms, the most expensive unit for the English, had performed appallingly. This time I made sure they led the English convoy through, no matter how many bad activation roles they had! This led to the English managing to steam roll their way through the French and getting the convoy to safety, a very different result from the first run through of the scenario.

This was the game of the weekend, a real epic! It was based on the fact that during Henry VIIIs march to Therouanne in his 1513 campaign the Landsknechts in his pay attacked and looted Ardres followed by some of the English in Henry's army. We had a French Garrison in Ardres for our game - although as it was actually part of the English Pale at this date I doubt this would have been the case in reality! I took the French for this one with Stuart as the English.

The idea was that the English and Landsknechts, under an unknown captain would attack the town which had a weak garrison, again under an unknown captain. Using the same rules as the "Sausages without Fire" scenario in Lion Rampant the English would have to set fire to four objectives. Three of these were within the town walls, the Church, the Manor House (big building with a red roof) and the Town Hall ( another big building with a double roof and two chimneys). All three of these can be seen in the photo above. The fourth objective was one of the corn fields that lay outside the walls.

The forces for the initial clash were as follows:

This was a hell of a game. Initially the English forces stormed the town, the Landsknechts going in first followed by the English archers. There was a lot of street fighting within the town which, although not such a visual spectacle as a pitched battle, was really entertaining and made for some tricky decisions for both of us during the game. Oddly it reminded me of the WWII City fights I used to game as a kid with my awfully painted Eastern Front Collection!

Eventually the French Garrison were worn down and destroyed, only the French Garrison Captain survived having defeated the English Captain in a challenge near the town gates. The English archers had taken the town and set about setting fire to it. This led to the French arriving very quickly through the orchard by the gates. The English managed to block them from getting in through the main gates but the Stradiots and Mounted Archers rode around the town walls to engage the English relief force which arrived slightly later.

Using the difficult terrain of the corn fields the French Light Cavalry did a good job of harassing the English cavalry as they arrived. The Burgundian Auxiliaries, the Men at Arms and Crossbowmen, were defeated in the fields. The English did manage to get into the town via the side gate and then attempted to force their way out of the main gate with Sir Rhys ap Thomas leading the way. Unfortunately Sir Rhys was defeated in another challenge by La Palice, the French relief force Captain, and only some of the English mounted archers managed to get away.

There were some great moments in this game. The initial fighting between the garrison and the looters in the town was really tense with lots of hiding in alley ways and waiting for the right moment to pop out and shoot or charge. When I get round to rebasing my 1540s English I think the "Camisade of Boulogne" will definiteley have to be fought out in this manner. The two challenges between the retinue leaders were fun, especially as the dice were on my side for these! At one point the English archers in the town rolled a "blunder" and shot some of their own side which we thought represented the chaos of the looting and burning in the town really well. Much to my annoyance Stuart's English managed to hold the main gate of the town for ages which stopped me from getting in and stopping them from burning everything. The pictures below should give some indication of the flow of the game.

Having enjoyed the street fighting of the previous game so much, for our third clash we came up with a new scenario. The town set up now represented part of English Calais. The scenario we were playing was "The Messenger" from Lion Rampant. One force was a band English rebels and hired German mercenaries who were accompanying a priest through Calais. This was no ordinary priest however as he had a secret message for Richard de la Pole, the last White Rose, from conspirators in England who were plotting to lead a Yorkist rebellion and depose the usurping Tudor, Henry VIII.
The rebels cover had been blown however and a loyal English force, men from Sir Charles Brandon's retinue, had been alerted to the conspiracy and were heading back to Calais from the French Campaign to apprehend the messenger. The rebels had realised their cover was about to be blown and were trying to escape the town and Calais Pale for the safety of French territory before it was too late.

Stuart took the English for this and I played the rebels. The forces were as follows:


This game turned out to be a bit of a disaster for the rebels! They soon became trapped in the narrow streets of the town and subjected to archery from the Garrison Bow, the English Mounted Archers and the Border Horse. The rebel archers were truly atrocious at rolling for activation (of course I would blame the dice!) and were taken to pieces by the loyalist forces. The Conspirators did make a rush for the gates but the Rebel Captain was defeated by the Loyalist Captain (in a challenge if my memory serves me correctly). The priest nearly made it out but in the end he was contained within Calais and the conspiracy was crushed.

This was another great game where the street fighting was really nasty. There was a lot of archery in the alley ways and evasion by the English as the Landsknechts tried to get to grips with them. This game also showed how you can be flexible with Lion Rampant and play all sorts of interesting scenarios, in fact it's much better for these kind of games than for pitched battles. As the 1513 Tudor campaign in France only really had one pitched ""battle" which was more of a rout anyway I think Lion Rampant works well for the various raids and ambushes of the campaign.

Our final game was more of a test scenario to try out culverins, well breech loaders in this case, and organ guns. For this one we returned to the walls of Therouanne. It was a sally by Landsknechts in the French Garrison against an English Bastion which had been established as part of the siege works. I played the French, well Landsknechts in French pay, with Stuart taking the English. The forces were as follows:

This game was another disastrous defeat for me! As my Landsknechts attempted to storm the English earthworks they were shot to pieces and the English had clearly won this clash outside the walls. It did allow us to trial some rules for the guns in which they can fire relatively easily to start with and then this becomes more and more difficult each time they fire. We felt this worked well as it allowed for guns to be used more that once but they cannot keep on firing rapidly. At first the breech loaders may have multiple charges ready which allows for a few shots that are not too difficult to achieve but after this as new charges have to be loaded and the gun has heated up it becomes more tricky to roll to activate and fire. This did require more record keeping but it seemed to work well.

I hope these write ups make sense. It can be tricky to remember everything and as I said above we didn't play these games as Battle Reports. They were all really great fun to play and I thought we came up with some very entertaining scenarios. Now we just have to think up some more! There has not been a chance to do much painting over the summer but there are new figures on the way. I have put together some of Stuarts Tudor dollies as English Archers and they should hopefully be finished within the next few weeks.