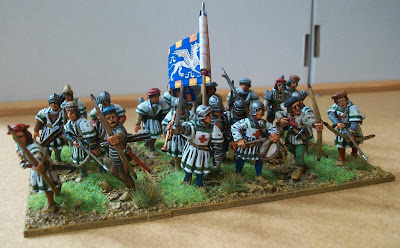 Despite all the gaming and reenacting that has been going on I have finally managed to paint up a new unit. Following on from my experiment with Stuart's excellent Tudor Dollies to make the gun crew I bit the bullet and tried a whole unit of Tudor Archers. I know that Stuart sculpted the Dollies with billmen more specifically in mind but they also work really well for a mix of advancing and firing bowmen as long as a bit of care is taken to match the arms to certain poses.

The three images below show the unit before I painted it up. I was keen to show what parts have been used to make up these figures and also show how much green stuff is needed to complete them. As you can see a bit of green stuff work is needed but it's not too much and adding the sleeves really isn't that difficult, and this is coming from someone who hates green stuff with a passion! So a mix of Stuart's Dolls, Perry Wars of the Roses plastics and Perry metal Tudor heads make up most of the unit. The eagle eyed may notice a head swapped Assault Group figure, a Foundry Landsknecht and even a new Warlord Plastic Landsknecht have also made it on to the command base. A couple of quivers from Front Rank and some paper crosses stuck on to resemble stitched ones complete the unit.


The painted unit is below. They march under the standard of Sir Henry Willoughby, which is from Pete's excellent flag range: http://thegreatitalianwars.blogspot.co.uk/2016/07/henry-viii-invasion-of-france-1513.html. Henry Willoughby was quite the veteran by the 1513 campaign having fought at Stoke in 1487 and Blackheath in 1497 as well as taking troops to the continent in 1489, 1491 and 1512. He was in the rearward in the 1513 campaign with a retinue of 200 men. I am really happy with the resulting unit. Yes they took a bit more effort to build and put together but the figures work beautifully for the early 16th English campaigns in France. You could use these chaps from the early 1500s through to the 1520s.

The Tudor Dollies are still available from Stuart, http://stuartsworkbench.blogspot.co.uk/2017/07/tudor-dollies-update.html. I thoroughly recommend them. They can make billmen, archers, handgunners or crossbowmen using the Perry plastic kits. You will notice I have also included some figures that aren't wearing the base coats. I like the variety this adds and with the simple change of head gear these Wars of the Roses figures can easily be brought into the early 16th Century. I think at some point I will do another archer unit similar to this. This will then take my early Tudor army to around 72 billmen with a matching 72 archers which gives a nice balance.


Following on from the games I had over the summer I have also painted up some figures to mark the use of ammunition for guns. Stuart and I were experimenting with artillery rules in Lion Rampant and were using a system of marking how many times a gun had fired. This made subsequent firing incrementally more difficult. So below we have a couple of labourers, a Front Rank wagon and some gun paraphernalia to use as markers. They could also be used to mark casualties or maybe some kind of objectives in a game, they are quite generic and useful. The bases are from Warbases and have a zero to twelve dial on them, the same as my casualty bases. I hate having to use little dice or bits of paper to record stuff. It really spoils the look of the game, and for me the spectacle is what it is all about. I find these kind of markers also add to the feel of the game, rather than detract like paper or dice do. They actually add to the look and flavour of the period which is great.