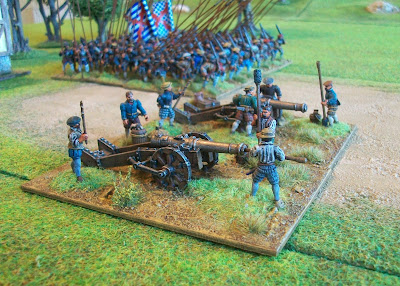 Following on from the 1540s Landsknechts I posted up at the start of the year work has continued on the Mid-16th Collection, the most recently completed figures for which are a couple of artillery pieces and crew. The guns and crew are by The Assault Group, one crew is from their Tudor range and the other from their Valois range. The Fleur De Lys badges have been removed from the French figures. As with a lot of the collection I was keen for both guns to have fairly generic crewmen so that they can be used for a variety of armies.

While I really like the TAG figures I did reposition these a little as the artillery crew all come open handed, ready to hold the various artillery swabs, powder scoops or ramrods which TAG also provide. While a few figures look great holding these I'm never keen on the whole team doing so. Both crews have a figure with a linstock. These are easy to make by simply gluing cotton around a piece of wire so it looks like the match wrapped around the linstock. One crew is in the process of repositioning the gun after it has recoiled, as gamers and modellers I think we often forget the fact guns would fly backwards when shooting. One crewman reaches for the bucket to swab the gun before the next charge is loaded. The other crew are in the process of ramming the shot home, having loaded the powder charge.

I think the crew work well in fairly drab outfits and complement the other TAG figures for this era. A pike block with marching shot in front has been included in the photos to add a bit more flavour. Period wise I would use them for the 1530s through to the early 1560s at a push. I have also finished another 16 shot for this collection and am currently working on some later Gendarmes. After these will hopefully follow a couple of Mid-16th Century command bases. This 1540s side project has moved slowly along in the background and it would be good to add some more bits and pieces to the collection so I can start using it for some later Renaissance Rampant games. Hopefully the "Camisade of Boulogne" is not too far off!