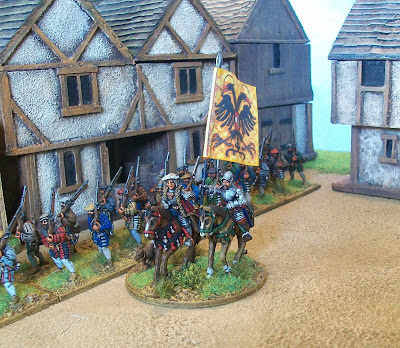 Amidst the recent battle reports I have had time to finish two more bases for my Mid 16th Century Collection. In fact with the completion of these command bases, the guns, the Steel Fist Gendarmes and the 1540s Landsknecht block this collection is really starting to come together. A full array of the 1540s army should be on its way soon. Of course I still want to add more, particularly some of The Assault Group mounted and dismounted border horse so that gaming the 1540s "Rough Wooing" becomes an option but for now this can wait.

The two bases are both made up of the excellent Valois and Tudor figures from The Assault Group, all be it with a few minor conversions. The dog on the mounted command base is from Steel Fist Miniatures. The flags are from Pete's excellent range of renaissance flags. The figures have a really great mid century feel about them. On the base of infantry I have given the main commander a simple baton and one of the guards (or is he possibly a noble volunteer?) a sword and buckler. This helps to add to the "ancient" style that much of the arms and armour seems to be harking back to in the 1530s-1560s. While the late 15th Century onwards is often labelled as the start of the Renaissance, with regard to the style of the arms and armour, it seems the Mid 16th Century was perhaps the time when the greatest attempt was made to echo the Greeks and Romans of Classical antiquity.

As always I have a few larger projects lined up but before diving into one of them I am going to take the time to sort out a few bits and pieces. More command and casualty bases, using figures that I always mean to paint but never get round to and maybe some more livestock and artillery.