The Raid on Carrickfergus, 1513 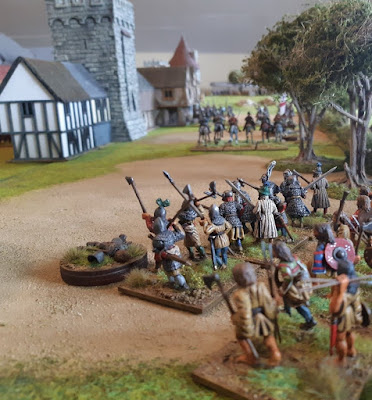 Recently I have had the luxury of being able to leave my gaming table set up for a couple of months, hence the spate of battle reports on the blog. The final game, before putting it all away for a while, was played out this weekend with three of my fellow reenactors. Following on from the "Stoke 1514?" scenario with Jason, Phil and Sven were also keen to have a game. As we are an Anglo-Irish 15th Century reenactment group this set me an interesting challenge of coming up with a four player scenario set in the early 16th Century, as I don't have any specific Wars of the Roses figures, that would see lots of Kern and Galloglass taking the field.

I was looking for something that at least gave a nod to historical events but also a scenario that would be fun for us all to take part in. Then I remembered a plate from the Opsrey Elite series "Scottish Renaissance Armies 1513-1550" (surely having this title in the Elite series is an oxymoron right?) that shows the Earl of Arran and the Scots fleet attacking Carrickfergus in 1513 in support of an O'Donnell rebellion. This was an event that provided plenty of scope for an unsual scenario.

In June 1513 Henry VIII landed at Calais to lead his army in an invasion of France. It was the young Kings first military campaign and he was keen to emulate Henry V's glorious campaign of nearly a hundred years before. As part of the "Auld Alliance" the Scottish King, James IV, had agreed to aid Louis XII against the English. The Scottish invasion of England a few months later ended in James' death at Flodden.

As part of the alliance between Scotland and France, the French king had agreed to pay James IV 50,000 francs and to victual the Scottish Fleet if it was sent to the aid of the French. James Hamilton, Earl of Arran, a man already experienced in commanding a fleet, having led a Scots naval expedition to aid the Danes in 1502, was put in charge of the Scots navy. The fleet left Scotland in July 1513 and included the "Michael", an enormous 240 foot long vessel which had been commissioned by James as an attempt to put Scottish power well and truly on the European stage.

Instead of sailing straight for France Hamilton first sailed for Ulster and attacked Carrickfergus which had an English Royal Garrison. The O'Donnell of Tyrconnell had rebelled against the English in Ulster and the O'Donnells were ostensibly allied to the Scots. Hamilton failed to take the castle but did loot and burn the town.

The scenario involved a naval landing from the Scottish fleet led by James Hamilton which was supported by Hugh O'Donnell and his Gaelic followers attacking from the Ulster countryside. The English Garrison would sally out of Carrickfergus Castle to defend it while their own Anglo-Irish allies arrived to defend the town as well. There were four retinues each commanded by a different player.

To add to the confusion the four retinues would each deply from a corner of the field via move activations. Units could enter with a move activation, they could not attack or skirmish on the turn they entered. The deployment areas were set out so that each player would enter opposite his allied player and so have enemies on either side as he tried to accomplish his objectives. The photo above shows where each retinue would enter, the Scots from the shore, the English from the castle and the two Irish contingents from the countryside. The objectives would represent the fact that this was an attempt to loot and burn Carrickfergus rather than a head on clash.

Four "tokens" of cattle were placed in the centre of the table, two in the main street of Carrickfergus and two just outside the fields, see the photo above, apologies for the labels! Once all players had troops on the table these "tokens" would move in a random direction 2D6 inches at the start of each turn, simply stopping if they hit obstacles. The tokens could be looted or saved, depending on the retinue. All of the retinues, English, Irish or Scots could attempt to take a cattle token. A unit had to move up to the base to take control of it (as long as it was not already in the control of another unit). The cattle token could then be moved by a unit and would stop moving randomly while in the unit's possession. A unit could only move one cattle token at a time and could not enter rough terrain with a token

If a unit in possession of a cattle token moved into contact with its entry point the cattle were removed and would count towards Honour Points. The unit could then continue in the game.

The winner of this game was to be decided via Honour Points which were awarded accordingly:

As always the rules were adapted Renaissance Rampant rules and the photos are of the actual game. As you can probably imagine with four different players and retinues this was a pretty chaotic and bloody game and I have provided a brief highlight of events whilst the photographs and captions also give a good idea of how things developed. Sven took control of The Earl of Arran's Scots with Jason playing the "Wild Irish" under O'Donnell. Phil commanded the Anglo-Irish FitzGeralds while I took command of the English Garrison in Carrickfergus Castle.

The retinues were as follows:

Hugh O'Donnell of Tyrconnell and his Gaelic troops

The Anglo-Irish FitzGeralds and Gaelic Allies


It didn't take long for the action to start. The Scots and their O'Donnell allies were the first to enter the scene, quickly arriving in numbers. The Anglo-Irish followed closely and were soon engaged in a ferocious battle against the Scots around the shore. The Scots Pike pushed into the Anglo-Irish retinue being defeated in a series of clashes, while some of the naval party started to enter the town itself. At the other end of the town the O'Donnell forces halted around the castle giving the garrison time to sally out and launch a rain of arrows into them. The English archery wrought havoc amongst the O'Donnell soldiery and caused some of them to fall back and flee.

Whilst his troops battled the English, Hugh O'Donnell and his Noble Cavalry rode towards the town, pushing back the Anglo-Irish cavalry before them, and getting into a position where they could attempt to burn one of the towns largest buildings. They failed to set the building alight however, giving the Anglo-Irish enough time to send Kern and more Light Horse to defend the town. Hugh O'Donnell was knocked from his horse in a skirmish with the Anglo-Irish Light Horse. The first major casualty of the day had gone to the FitzGeralds.

The fierce fighting between the main Scots and Anglo-Irish forces continued with unit after unit being broken in the series of melees that were taking place. James Hamilton himself sort out the FitzGerald Captain and defeated him in a one on one combat. The Earl of Arran's victory over the Anglo-Irish seemed complete but, like his pikemen earlier, he had pushed too far into the enemy ranks and was eventually overwhelmed and brought down, meaning the Anglo-Irish had now defeated both of the enemy retinue leaders, although their own captain had been slain.

Things were starting to look bad for the Scots and their Gaelic allies. The English Garrison had fended off the O'Donnell attack and were collecting the cattle from the town, herding them back into the Castle gates for safety. At the other end of the town the Anglo-Irish had also succeeded in "rescuing" some of the cattle. None of the town buildings had been set alight, Hugh O'Donnell having failed and an attempt by the Scots "Marines" to sneak around the side of the town being seen off by a sally from the Garrison's small number of Demilancers.

The English Garrison had failed to notice that in the chaos some of the O'Donnell Kern had slipped past them and into the town. The Anglo-Irish could no longer stop them as all their troops had been drawn into the battle on the shore. With Garrison troops chasing them the fleet footed Kern rushed to the buildings and succeeded in setting one of them ablaze. In an even more ridiculous turn of events another unit of Scots arrived from their fleet floating offshore (Sven rolled a double 6 to activate and then rolled "reinforcements" on the event chart! This is exactly what happened in one of the Venlo 1511 games). With the arrival of a fresh unit of pikemen the English Garrison's Light Cavalry attempted to stop them, the Demilancers having been routed in an earlier clash, but could not prevent them from landing and setting the other major town building alight.

With the town ablaze and all the cattle either herded to safety or looted, the Scots had managed to capture one group of them, the raid ended. The Scots that were left embarked in their rowing boats to return to the fleet while the O'Donnell raiders melted back into the countryside. The Garrison Captain was the only retinue leader to have not been killed or downed in the fighting but although the Garrison was still at over half strength the town was in flames.

So using the Honour Point system set out above the final scores were:

Jason as the Hugh O'Donnell and the Gaelic Irish: 3 points for setting alight one of the buildings and 3 points as the Scots had set alight the other building. Total 6 Honour Points

Phil as the Anglo-Irish Captain: 4 points for downing Hugh O'Donnell and The Earl of Arran. 2 points for one cattle token. Total 6 Honour Points

Myself as the Garrison Captain: 4 points for 2 cattle tokens. 2 points for having over half of the retinue left at the end of the game. Total 6 Honour Points.

So the Scots, true to the historic raid on the town, successfully looted and burnt Carrickfergus and were the victors!

This was a really fun game and something a little different from the styles of scenario I have played before. There is a lot to be said for the carnage created by having four players around the table each with their own retinue. It was great to use nearly my whole Irish collection in the game and helped me to think a bit more about the rules for the Gaelic Irish, they are still something of a work in progress. Once the reenacting season is over there could well be more visits to Ireland on the games table.