Command and Casualty Bases - Maximilian I and a flock of sheep 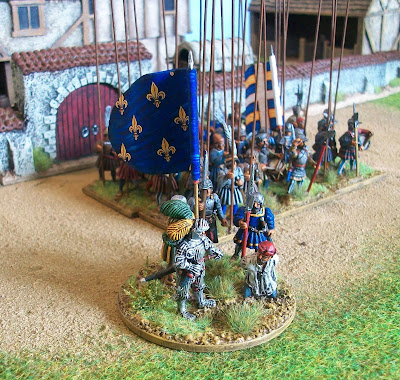 This blog has had some pretty awful post titles over the years, this could certainly be one of the top contenders! Over the past couple of weeks I have been working on a few bits and pieces that I have been meaning to get around to for ages. Some are figures left over from the great rebasing a few years back while others were odd figures I had been meaning to use or simply little ideas that I wanted to put into practice. The collection has also been in need of a few more casualty markers, specifically generic ones that could be used for anything from the Italian Wars through to the Gaelic Irish.

The first of these is a command base using the Warlord Games, formally Pro Gloria Miniatures, Maximilian I. This miniature was left unbased following the "Great Rebasing of 2015" as was the page figure by The Assault Group, to Maximilian's left shown below. The remaining Landsknecht are all Wargames Foundry figures and the helmet that the page is holding is a Steel Fist piece. The Maximilian figure is a great sculpt, and also a pretty good likeness to the aging Maximilian. I have included Dürer's characterful painting of the Holy Roman Emperor in his last year to show this. The style of harness he is wearing is also consistent with his age. When he was a young man the late 15th Century Gothic Style was the fashion, the harness he is depicted in here is in the 16th century style of his later years. This base could also simply be used to represent an older Landsknecht Captain.


The next command base uses a captive figure made by Eureka Miniatures. I picked him up years ago and have been meaning to do a command base like this for ages. It is inspired by a base that Pete of Pete's Flags, http://thegreatitalianwars.blogspot.com/, had in his old Italian Wars collection which had some Landsknecht and a Gendarme with a prisoner. Instead of Landsknecht I have gone for generic early 16th Century Infantry and a Captain in a Maximilian harness. The Captain is a Steel Fist Miniature and the soldiers are all Assault Group figures with head swaps. The Eureka figure has a minor conversion so that he is wearing shoes and hose rather than bare legged. As the flag is interchangeable this is a really useful base and could depict a French, Spanish, Scottish or English Captain from c.1500 up to the 1520s depending on the flag. In the images below the figures are shown as Frenchmen.


Moving onto the casualty or artillery markers I have painted up another five really simple ones. Rather than depicting casualties they could all be used as markers for lots of different things. From left to right the chest, jug and barrel are most obviously of use as an artillery marker and the man with his head in his hands in despair is probably the closest to a casualty but the priests or friars and the dog could be used as markers for all sorts of stuff. I have found that in games when there are heavy casualties on a lot of units we can run out of suitable markers so these will be great as generic ones in such situations. As long as they are evocative of the period I think they can really add to the battlefield. In fact I would argue that the monks, friars or priests of the various religious orders that would have accompanied armies are underepresented on the table top so the ecclesiastical chaps should be really useful. I may do some more in the future.


The other casualty base is a little more specific, representing a man at arms receiving a new lance from his squire. This is an idea I pinched from a collection in an old article in Wargames, Soldiers and Strategy. I think it was the one that covered the Italian Wars and Pavia. We have a Wargames Foundry Gendarme receiving his lance from an Assault Group figure. As with the markers above while it may not depict an actual casualty it certainly shows the kind of thing that would be going on during an engagement. It's always great to have little details like this on the field. Maybe the squire himself should be mounted as well but for the sake of this base we will have to assume he has dismounted to help his master. 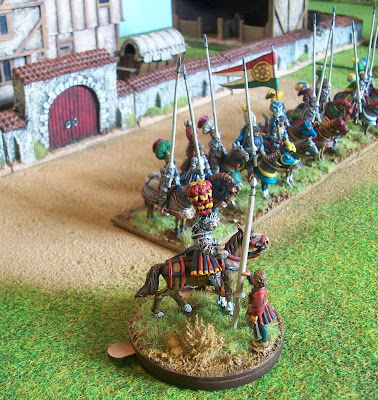 Finally when I took part in the Stoke event at the Wargames Foundry last year I picked up a couple of packs of their sheep, and here they are on two bases to form a flock. Always useful for table dressing or as tokens in a particular scenario it's just getting round to painting them that is an issue. All the little details in these pieces should really help to add flavour to future wargames. I still have some more little bits and pieces that I want to do as well as revisiting some of my terrain but a few more units are on the workbench at the moment.