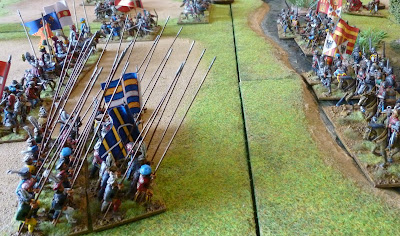 Following the epic of Agnadello in July I thought it would be interesting to play out another pitched battle using the heavily modified "Renaissance Rampant" rules. I was joined by my friend and Hundred Years War collector Tom and we decided to fight out the first battle of Seminara. This was a great opportunity for me to get out lots of my very early Italian Wars figures and use the card system that Stuart and myself trialled in our Agnadello game with a few changes.

Following the famed French invasion of Italy in 1494 and the fall of the Kingdom of Naples the Neapolitans were not left isolated in defeat. Sensing an opportunity the Spanish King, Ferdinand, agreed to help the young King of Naples, Ferrante, in return for the annexation of several Calabrian towns to Ferdinand's Kingdom of Sicily. Gonzalo de Cordoba, El Gran Capitan, sailed from Sicily with a small army of Granadan Veterans in an attempt to help Ferrante recover Naples, landing in Calabria in May 1495.

Ferrante handed the town of Reggio over to Spain, but this forced Cordoba to split his small army and leave some as a garrison force. The Allied army marched into territory occupied by the French and Seminara opended it's gates to the Neapolitan King. The French garrisons were under the leadership of Bérault Stuart d'Aubigny, a Scotsman who had fought for Henry Tudor at Bosworth ten years earlier. He was suffering badly from malaria but had under his command an effective mix of French gendarmes and Swiss infantry. He collected his forces and moved towards the King of Naples and his Spanish allies.

While Cordoba urged caution in taking on the French directly, Ferrante was eager for battle and against his better judgement El Gran Capitan led an army of Spanish and Calabrians against the French. On 21 June 1495* the forces met three miles outside Seminara with the allies attempting to block the French at a shallow stream. El Gran Capitan used his Jinetes to good effect attempting to stall the French advance but the hit and run tactics of the Spanish light horse alarmed the Calabrian infantry who thought the cavalry were retreating and fled themselves. The Spanish could not match the Swiss pike, needing more pikemen and arquebusiers in their ranks. Ferrante himself was targeted and was lucky to escape the field while Cordoba and his Spanish fought a delaying action as the Neapolitan King's forces fled.

This was not going to be as large a game as the Agnadello one, historically it wasn't as large a battle and was fought between relatively small forces. The big clash that was in the offing would take place at Fornovo a few weeks later when Charles VIII and the main French army would encounter an Italian army in northern Italy. I wanted to tweak the big battle rules a little and not allow as many activation rerolls as had been possible in the last game. I also wanted to create some special rules for the personalities involved in this battle. Tom chose to play as the French and I took the Spanish and Neapolitan allies.

For this game each army was divided up into two retinues. For each army each turn the player drew a card from a standard deck. The numbered cards (1-10) were halved rounding up to give that army that many rerolls for activations that turn. These rerolls could be used on either of the two retinues. This meant 1-5 rerolls per army per turn shared between the two retinues as the player saw fit. If a player rolled a double 1, a "Blunder" result, this did not end that retinues turn but meant they could not attempt to activate that unit again that turn after rolling on the "Blunder" chart.

If a jack, king or queen was taken the player continued to take cards until a number card was drawn but held onto the picture card or cards. These were kept for that army and played on a unit at any time. When played on a unit that unit would automatically activate and get a roll on the "Bonus" Chart .

To represent Ferrante's impetuosity his unit of Elmeti had "Wild Charge". He also had to challenge any opposing retinue leader within 12" of him at the start of his turn.

To represent the fact that d'Aubigny had to command his troops from a litter towards the end of the battle at the start of his retinue's turn his player had to roll a D6. On a 1 his gendarmes became foot knights, any casualties already sustained remained the same.

It seems that in the actual battle the terrain had very little effect on preventing the French from smashing the Spanish and Italian infantry. In the game the shallow stream was not a significant obstacle in terms of movement. It did have an effect on combat in the normal style of terrain and it did give cover against missile weapons but it did not impede movement in any way. We used the river tiles for the stream but added the "islands" of vegetation to help give the impression that it was a very shallow watercourse.

All of the photos are from the game and as always following the captions of the photos should give a good idea of how the action played out.

The Spanish and Neapolitans

The battle started with the Spanish and Italians rushing forward to form a defensive line at the stream in an attempt to use the advantage of the cover as well as the disruption it would cause to the more combat effective French troops as they reached the Allied lines. Initially this worked really well for the allied force. The Spanish jinetes plagued the advancing French, harassing the Swiss pike and the French men-at-arms on the right flank of French army. When the Spanish arquebusiers, Italian mounted crossbowmen and the culverins joined the missile fight one of the Swiss pike blocks turned and fled before even reaching the water.

A unit of gendarmes in the French centre were tempted into attacking the rodeleros where they were defeated in a brief melee, the shallow rocky stream being enough to negate the gendarmes unstoppable charge. The men-at-arms holding the French right flank were put to flight finding it impossible to close with the units of jinetes that swarmed around them, hurling javelins at the more heavily armed French. It looked as if the d'Aubigny's men would loose all momentum before even fully engaging with the Spanish and Italians.


Watching the assault from behind the front line d'Aubigny was forced to dismount as his health began to fail him. With his health failing his luck was turning. What the Allies had not noticed was the strength of the French left flank that was nearing the much weaker Allied right flank, held by Ferrante's Calabrians. French cavalry and pikemen, supported by their captain and his personal troops on foot, along with Swiss arquebusiers and a culverin, pushed across the stream and smashed into the Italian levies. The result was predictable with the Italians being rolled up and the French lancers pushing deep into their lines.

On the other side of the field the remaining Swiss took on the Spanish men-at-arms with Gonzalo de Cordoba personally leading a counter charge against them. The Swiss were defeated in a series of clashes but they had distracted Cordoba's Spanish contingent enough to allow the rest of the French to launch a full assault on the Italians. The shallow waters of the stream ran red as French infantry charged in, engaging the Italians holding the line. In response Ferrante himself charged his household troops into the marauding French cavalry in an attempt to save his army.


The Spanish turned to engage some of the French as they crossed the stream and the Italians managed to see off the French lancers who had ridden into their lines. By now both armies had been heavily engaged and with the morale of both the French and Allies wavering the commanders grew desperate. Gonzalo de Cordoba, El Gran Capitan, personally engaged the ailing d'Aubigny in combat but was undable to bring him down and was forced to withdraw as d'Aubigny's French troops rallied to their captains defence. Feeling he had already lost enough of his small Spanish force Cordoba left the field taking what troops he had left with him in good order.

For Ferrante it was his kingdom at stake and so the King of Naples followed El Gran Capitan's example and tried one last strike at d'Aubigny. Despite his malaria yet again the French general survived the attack! That was it for Ferrante and with the French holding the field and the Spanish in the process of withdrawing the Neapolitan King quit the field. Little had survived of his Calabrian army that had been raised to rescue the kingdom. A bloodied and battered French army held the field and the day was theirs.


Tom and I had a really entertaining and closely fought game. It was great to try a different take on the larger battle rules using the deck of cards system. Experimenting with these rules has been the perfect opportunity to give the very early Italian Wars collection a couple of outings this summer, I even got to use my Kingdom of Naples flags in this game. Of course I still have dozens of ideas for other potential scenarios both large and small scale. I feel that the newly repainted fortifications are going to have to feature in a scenario soon.
Posted by Oli at 06:32