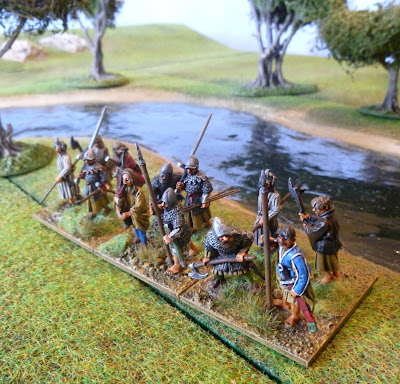 Earlier in the year Antediluvian Miniatures released a fantastic set of sculpts based on Albrecht Dürer's image of Irish soldiery in 1521, https://antediluvianminiatures.wordpress.com/2018/02/07/shop-historical-range/. I wanted to incorporate these figures into my exisiting Gaelic Irish collection and decided that a small group of galloglass, at ease, with their attendants amongst them would work well. I also wanted one of the bases to really pay homage to the image, as can be seen in the first photo below. The unit is a mix of Antediluvian, Perry and Old Glory miniatures.

The attendants are often confused with Kern but it seems that the "boys" that accompanied the galloglass were not Kern. The Kern themselves had attendants. Henry VIII hired 920 Kern in May 1544, and 234 accompanying boys, the English recruiters specifically requesting that less boys were hired. The attendants in the Dürer image are probably not Kern but rather "Daloynes", a corruption of the Gaelic "Diolmhainigh", meaning hireling. This is discussed in greater detail in a previous post: http://camisado1500s.blogspot.com/2018/01/of-kerns-and-gallowglasses-is-supplied.html. You may notice that a couple of the Antediluvian galloglass have been converted to carry javelins and an axe instead of their bow and spear.

As this image is dated to 1521, it is likely that it was completed while Dürer was in Antwerp. Ireland had a trade link with Antwerp with Irish style swords being exported from the city and Irish Cloaks being an import. Neil Melville's book on the Two-Handed Sword has a section on Scottish styles of two-handers in which he states that of the "Highland" style, incorrectly often termed a "Claymore", all known blades are of German manufacture. He explains that the term "Claymore" is an anglicised version of the Gaelic for "great sword", "claidheamh mor". It was used to describe the basket-hilted broadsword and was first recorded in 1715. A gentleman by the name of James Boswell wrote an account of his travels in the Hebrides in 1773 and incorrectly referred to a two-handed sword as a "Claymore" and the rest is history, the term stuck. The Gaelic term for a two-hander is "claidheamh da laimb" which was never anglicised into another word. In literary sources it is normally simply referred to as a "twa handit sword" spelt in a variety of ways, which makes perfect sense to me. So the word "Claymore", which I have myself used many times, referring to the Irish two-handers as such in this blog, is incorrect. Now don't even get me started on back scabbards...

With reference to the Irish stye two-handers with the unique hollow ring pommel, that one of the galloglass in the image is carrying, Melville goes on to say that we don't have much to go on having Dürer's painting and one example in the National Museum of Ireland. A couple of other examples exist but in fragmentary condition. By complete coincidence I also happened upon a reference to the Irish exporting their peculiar style of cloaks recently. From "The World of the Newport Medieval Ship", in reference to Bristol's imports from Ireland, one of the contributors states "there were small but steady imports of woollen "check", linen and mantles (a type of cloak). Such cloth and clothing amounted to £200 (14 per cent) of Bristol's Irish imports in 1492/93". Is woollen "check" what we can see the central figure of the image wrapped in? It is interesting that these garments were being exported to Bristol and found an overseas market.

So where am I going with this ramble about Gaelic two-handed swords and the export of Irish clothing. I have covered the theory before on this blog, http://camisado1500s.blogspot.com/2019/02/16th-century-gaelic-irish.html, but I thought I would mention it again as these miniatures come directly from Dürer's image and the above points about two-handed swords being imported and the cloaks being exported lend the idea further weight. It is the arguement that during this period Antwerp was famed for its processions at civic festivals where the citizens dressed as different foreigners, so the men in the image could in fact be citizens of Antwerp dressed as Irish. Note the text on the image doesn't state they are Irishmen, but states in translation "Thus go the soldiers of Ireland beyond England / Thus go the poor of Ireland". Dürer  did  have form for this kind of thing as he is known to have dressed up a young German as a Native American Indian for another piece. The citizens would have had access to Gaelic style two-handed swords, as we can see from Melville's comments that all of the surviving Gaelic Scots blades are off German origin, and access to the clothing, as we know the woollen check, linen and mantles were being exported. I am not sure. It could just as easily be an image drawn from someone elses account or these could have been genuine Irishmen serving as mercenaries abroad or even simply guards for an Irish Merchant ship, piracy was certainly a real threat to trade in this period. I guess we will never know but I do find it a fascinating theory nonetheless.

Anyway enough rambling for now, I thought some of you may find the information about the "Claymore" interesting. I will certainly always be referring to them as "twa handit swords" from now on!