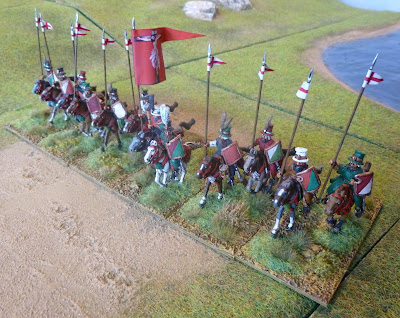 The new year starts with another Hungarian unit, another take on the hussars. This was only meant to be a small side project, a couple of bespoke units that I could use alongside other parts of my collection as Hungarians. Inevitably the more time I've spent researching this army, the more figures I have wanted to try and convert. The "Battle of Orsha" painting discussed in my last couple of posts has fascinated me. There is an excellent article on it online, http://archiv.ub.uni-heidelberg.de/artdok/3363/1/Zygulski_The_Battle_of_Orsha_1979.pdf which I would recommend. It divides the painting up into over 50 sections and then discusses each in detail. The appendices at the end are also an invaluable tool for anyone trying to model some of the troops in the image.

The artist's depiction of the hussars has particularly caught my attention and I've converted some of the Perry Miniatures stradiots into a second unit. I have seen this done before, https://tabletopcommander.blogspot.com/2016/10/hungarian-hussars-finished-unit.html, to great effect and was keen to have ago at this, trying to match the figures as closely to the painting as possible. This hasn't been entirely achievable and some of the details have been compromised. The horses don't have the coverings depicted in the image and their tails are tied in the Turkish fashion on the miniatures, which is not common in the painting. The hussar's coats or dolmans on the miniatures also lack the detailed frogging of many of those in the painting.

But there have been lots of details that is has been possible to model. Firstly those distinctive "top hats" with the metallic bands around them and the plume holders have been great fun to reproduce on the miniatures. Small strips of paper have formed the bands with green stuff being used to model the top of the hats so that they get wider as they get taller. The ends of scabbards from the Perry plastic Wars of the Roses kits have then been used to form the plume holders themselves. This took a while but has produced some great results. I have also included a Dürer image below (is a Camisado post complete without one?) which shows what must have been deemed the typical Hungarian attire in the early 16th century. One of these Hungarian hats with a plume is clearly at the top of the "trophy" being carried. This is important as we don't know exactly what nationality the hussars depicted in the painting are meant to be, those in the painting may well have been mercenaries as they were developed in Hungary in the 15th century and the painting depicts them in a Polish/Lithuanian army.

The captain of the unit is carrying a buzdygang mace typical of those used in Eastern Europe at this time. In the first detail from the painting, shown above, a hussar is depicted wielding one of these maces in battle and in other parts of the painting hussars are shown with the buzdygang mace tucked into their belts. He also rides a white steed with a dyed mane and tail. The famed Polish hussars of the 17th century, of which these are the precursor, were known to sometimes dye their horses so it was great to find this early example in the painting and be able to represent it on the tabletop. The finished captain can be seen in the photo below.

Other details I wanted to represent were the saddle signal drums shown being carried by a hussar captain. The section of the painting above depicts a wealthy hussar in an ermine lined cloak. The signal drums were used to give commands on the battlefield. This hussar's dress and the drums clearly mark him out as a leader. These small drums were obvioulsy a feature of the light horsemen of Eastern Europe as the stradiots were known to use them. In the 1506 print of the Battle of Fornovo, 1495, the stradiot in the bottom left of the image, https://c1.staticflickr.com/5/4577/38749523692_d2dd192254_o.jpg, carries one of these saddle drums. They were very easy to reproduce in miniature. The drums were taken off some 15mm figures and then added to the saddle with the gaps filled in with green stuff. Now I wish I had added them to a couple of my stradiots back when I painted them up!
Apart from one of the captains and the standard bearer, all of the hussars carry lances with the St George's cross as in the original image. I have also tried to stick to a palette that only uses those colours for the clothing and hats that are seen in the painting and have attempted to match the shields as closely as possible. Copying the shields also meant I didn't have to attempt loads of complex shield designs which I was more than happy to avoid! You may notice that some of the Perry stradiot miniatures used are orginally cast with padded armour. This was easy to change, the padded armour has simply been smoothed over with green stuff and I have then added long loosely worn sleeves to the backs of the models, a technique used on lots of the miniatures in my last three blog posts.
When I painted the first unit of hussars I failed to appreciate how heavily ornamented the hussar scabbards were. From the painting it is clear that many were almost entirely covered in metal and gilt placques. To reflect this the scabbards for this unit have been painted as entirely metallic in either silver, bronze or gold. This also helps to further differentiate them from looking like stradiots.

The finished unit is below, along with a couple of pictures showing both of the hussar units I have completed. Two quite different attempts on the same theme. Which do you prefer and do you think the converted Perry figures really look that different from the stradiots they originally portrayed? I am not finished with the "Battle of Orsha" painting yet, there are at least two other sections that I want to try and recreate. As you can tell I have really gone down the rabbit hole on this one!