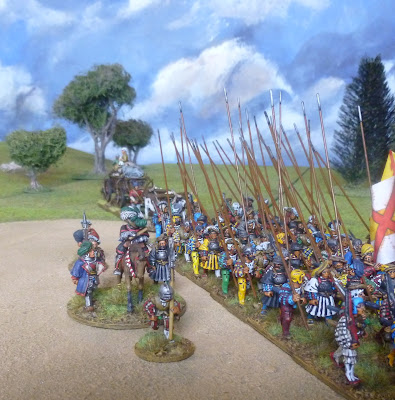 Following on from last months post here are a few more command bases. Some time ago now Simon of Steel Fist Miniatures very kindly sent me this pack of two mounted landsknecht officers: https://www.steelfistminiatures.com/product/lan-15.-landsknecht-mounted-officers./. Rather than use them as a pair I decided to use them to make two separate command bases, the first of which was inspired by the Reinhard V. Solms image shown below. I liked the idea of recreating the captain as he rides along in discussion with his men. The finished base can be seen below and shows a mounted landsknecht captain gesticulating with his command baton as he talks to an officer on foot. Along side him march two of his body guards with shouldered halberds. The figures on foot are all by Wargames Foundry and have had their bases raised with plasticard so that they are not dwarfed by the captain's horse. This is a trick I often use to balance figures from different manufacturers on the same base. I am fairly happy with the result although I do wonder if the mounted captain would have looked more dramatic had I position his head so that he was looking forward instead of engaging with the other officer.


For the next base rather than have another mounted landsknecht I have used a Steel Fist gendarme head and plume to create a gendarme command base.  The accompanying standard bearer is a Wargames Foundry figure with a Steel Fist plume added. Both of them are mounted on Perry Miniatures plastic horses as oppose to fully barded steeds. The captain's gesturing pose makes him look in more of a commanding than combative role and the unbarded horses also make them more suited to the smaller skirmish actions that I often game. As with the first base, although the figures are of slightly different stature, with a few tweaks they can be fitted to the Perry horses in such a way that the size differences are not noticed. With the addition of one of Pete's excellent flags they really look the part riding out ahead of a couple of units of Imperialist men at arms in the images below.

The last command base is for an upcoming Wenzenbach game which I hope to fight with Stuart in the next few weeks. When I finished my Assault Group early landsknecht, http://camisado1500s.blogspot.com/2017/04/early-landsknechts-c1500.html, I was left with about a dozen unused figures and some of these have been combined with a plastic man at arms in full harness from Warlord Games to form the command base. Transitional Maxilimian armour would have been state of the art in 1500 to 1510, the decade the clothing of these landsknecht is most suited to. The banner is that of Georg von Frundsberg who led his landsknecht to great success in the battle of Wenzenbach in 1504. Under his leadership they stormed the Bohemian wagonburg and routed the mercenary army of Ruprecht, Count Palatine of the Rhine. A couple of the photos below show the base with all of the early landsknecht in my collection whilst the last couple of images show the detail of the unsual striping that was prominent around 1500, more details of which can be found here: http://camisado1500s.blogspot.com/2017/03/wip-early-landsknechts.html. Let's see how they fair on the gaming table!