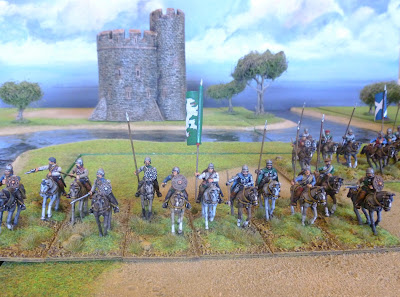 Following on from this months earlier "Ill Raid" post we are staying on the Anglo-Scots border and having a look at two dozen more border horse. These differ from my previous border horse units (see http://camisado1500s.blogspot.com/2018/07/new-terrain-and-more-border-horse.html and http://camisado1500s.blogspot.com/2017/05/1513-invasion-of-france-border-horse.html) as most of them are suitable for around 1540 onwards rather than for the first half of the 16th century. Instead of sallets being common we now see these horsemen in burgonets and "war-hats" or early cabassets. The inclusion of two figures with pistols also places the units in the 1540s at the earliest. I was cautious not to include a lot of pistols. Gervase Phillips states in the excellent "Anglo-Scots Wars" that pistols, or "dagges" as they were then often termed, were still relatively novel in the British Isles during the 1540s. An English officer, Christopher Ellerkar was shot in the neck by a Frenchman with a pistol during the Siege of Haddington before Ellerkar killed him with a lance and this was worthy of note in the dispatches to the English government.

The figures are all by the Assault Group with some conversions. I have added targes from a variety of manufacturers and have also head swapped a lot of the riders. A few have simple skull caps or cervellieres swapped from the Perry Wars of the Roses plastic sets. This means that I can use half a dozen of the figures for earlier Tudor armies and you may have spotted these in the "Ill Raid" and "The death of the Bastard Heron" games earlier this month. The majority of the head swaps were made using the new plastic Wargames Atlantic conquistadors sets. In my opinion these sets seem suited to the 1530s onwards with regard to the styles of hose and helmets included and the helmets are a great fit with the TAG sculpts. I have used lots of war-hats and burgonets from this plastic set which have added great variety to the Assault Group figures.

These figures are part of my current effort to build forces for wargaming the Rough Wooing of the 1540s when Henry VIII and then Edward VI's protector, Edward Seymour, the Duke of Somerset, waged war on the Scots in an attempt to force the betrothal of the infant Scottish Queen Mary to Henry's son, Edward. Border horse feature very heavily in the English and Scottish armies of these 1540s campaigns, to such an extent that I may need to do more of these in order to game battles like Ancrum Moor and Hadden Rig. They would of course also be great for the raids and skirmishes that took place around Boulogne in the 1540s and for the numerous Tudor campaigns in Ireland as well as for any border reiver skirmishes. At a pinch these figures are suitable for English or Scots armies all the way up to 1600 so they could potentially be the beginning of an Elizabethan collection. The new figures are shown below first as Scots and then as English with a small 1540s Tudor force.