Beneath the Walls of Therouanne 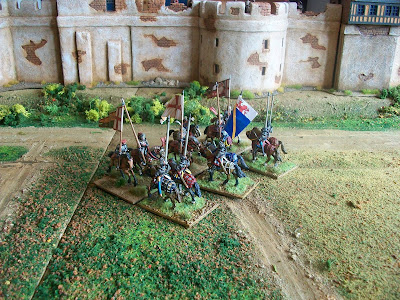 Hard to believe as it may be I have actually had a wargame! Three in fact! It only took six years since I started this blog but then again there is no point rushing things. Stuart of Army Royal, http://stuartsworkbench.blogspot.co.uk/, invited me to his for some games of Lion Rampant a couple of weekends ago. We played his adapted version of the rules, tweaked for the early 16th century, and fought three clashes in front of the walls of Therouanne. Great fun they were too! We weren't too fussed about every detail of the rules, you will notice in the pictures below we didn't adhere to the 3 inches between units rule for example, but the games had a great renaissance flavour and the activation and wild charge rules saw our troops getting into all sorts of trouble on the table without either of us being able to do much about it!

The photos below are of the games taken as we were playing them, the figures weren't posed afterwards. Because of this some parts of the games are not that well covered as I was too busy rolling dice and the lighting and photos aren't always great. Similarly I did not record every move and dice role, to be honest I would rather enjoy the game than feel like some kind of minute taker. Instead I wrote up a summary of each of the games the following day, and gave them a bit of a Tudor flavouring as well. Stuart may argue there is a bit of bias in there towards the French who I was playing!

The first game was the "Hammer and Anvil" scenario. Stuart played the English under Edward Stafford Duke of Buckingham returning from a foray along the walls of Therouanne, heading back to the English camp, and I played the French, under the Chevalier Bayard, attempting to stop them. Initially Bayard deployed out on his own with his men-at-arms, obviously in an attempt to gain some glory, accompanied by a few lowly Franc Archers. The Francs Archers were immediately dispersed by the English archers and Landsknecht shot, or Almains as the English called them. Buckingham took the fight to Bayard and the two men with their mounted retainers broke lances in a series of clashes underneath the walls. Buckingham was unhorsed and bested and flushed with victory Bayards men-at-arms rode on into the English ranks only to be defeated themselves!


Meanwhile further from the walls the English Border Horse had nearly fled the field when French reinforcements in the form of Mounted Crossbowmen and Stradiots arrived and  sent the Northern Horsemen running back. Closer to the walls the English foot pressed on despite the loss of their bowmen and leader. They easily scattered some French Aventuriers and left the field being shadowed by the Stradiots and Crossbowmen. Some of the English had made it back to their camp but not enough to secure an English victory.

The second game we played was the "A Taxing Afternoon" scenario. We placed six items such as barrels, pigs and wagons, amidst a small farm outside the walls that could be collected and taken back off the table to earn points. We decided to dice for the value of these when they were collected, we didn't put stickers underneath as suggested in the Lion Rampant book, but in hindsight should have perhaps used another method.

The French Mounted Crossbowmen rode into the village took a wagon and left! The Commander of the Calais Garrison, Sir Richard Carew, entered the farm with his infantry, the English Archers doing a good job of harassing Bayard and his men-at-arms. Bayard rather unchivalrously fled with some more points, he did momentarily have a change of heart and turn back to face the English but then though better of it and carried on off the table.

This game was fun but we got the scenario a bit confused with regard as to who could capture tokens which made it rather short - you can tell we don't game much!

For the third game we fought a slightly larger skirmish outside the walls of Therouanne as some of the French garrison sallied out to test the English besiegers. The Landsknechts in English pay, intent on plunder, went straight for some French wagons defended by Francs Archers who sent the "Almaynes" running. This was a sideshow to the main event in the centre which saw the English and French manouvering and harassing each other around some hedges in the centre of the field.

On the English left, Buckingham initially sent the Stradiots reeling only to see them rally and slowly weaken his horsemen through skirmishing attacks. Border Horsemen and Mounted Crossbowmen skirmished with each other as the forces drew nearer. The French commander and his Gendarmes, (Bayard had hung up his spurs for this clash!) thundered into the English infantry initially causing chaos but quickly realising they had bitten of more than they could chew and being defeated in the hedges! Similarly Buckingham and his horsemen were brought down by the French as the Stradiots lured them nearer. This was the  last success for the French defenders however as they soon found themselves under a rain of English arrows and were slowly pushed back to their walls.

The Stradiots and Mounted Crossbowmen tried to counter attack again but the fight was over. The Francs archers who had successfully pushed back the Landsknechts early on were shooed away by the Border Horse and English bowmen and the entire French force melted into the ditch as men attempted to get back to the safety of the walls. Therouannes guns fired a final salvo at the English as they drew nearer to cover the French as they fled the field.


I really enjoyed these games and will be playing Lion Rampant again. Stuart was a fantastic host and hopefully I will be able to host a game or two next time. Some of his rule tweaks can be found here: http://stuartsworkbench.blogspot.co.uk/2017/02/lion-rampant-aar.html, however we have already amended these slighty on reflection of how the games went. Of course the games have also given me a whole host of future project ideas. Some casualty bases, Stuarts were superb, and perhaps some more skirmish style bases of halberdiers that could be used either in Lion Rampant or as part of a Forlorn Hope for my full collection are a few ideas I may try soon.