A few more casualties of war... 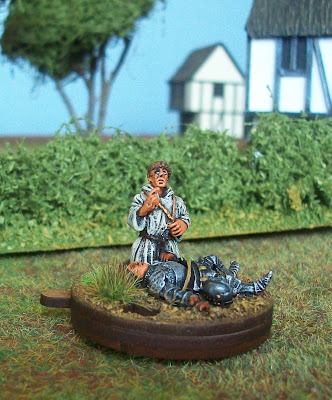 While working on another unit of Landsknechts, that never seems to get finished, I have also completed a few more casualty bases for gaming. Some of these I have tried to do as mini-vignettes, in the picture above for example a priest is offering the last rites to a fallen man-at-arms. I also tried a bit of sculpting on the base pictured below, bringing a Perry Miniatures Wars of the Roses miniature into the 16th Century by changing his livery jacket into a base coat. This is a copy of Stuarts conversion on Army Royal, https://3.bp.blogspot.com/-OLDgC3BYmg0/WTKbFggJtfI/AAAAAAAAD9I/PdfYcELTOVcgVkyfQnTDfjnnTDBbq_x8ACLcB/s1600/LR%2Bcasualty%2B2.jpg, in fact it was Stuart who was kind enough to spend some time showing me how to sculpt these base coats. While it's nowhere near his standard I am really pleased with the results. I have chosen to depict them as a French man-at-arms and retainer so I can use them in the Italian Wars or against the English in Northern France.


Below are some old Redoubt Miniatures pieces. Two fallen horses on larger 60mm diameter bases that Warbases were happy to make for me on request, and then a more generic halberdier in a breastplate, tassets and sallet and a fallen Tudor Archer. I reused figures from a small vignette I painted up a couple of years ago http://camisado1500s.blogspot.co.uk/2015/09/mourning-their-captain.html, (nothing is free from chopping and changing in my collection!) to make the next base. Two infantrymen look over their fallen lord or captain. The final casualty base is for the Spanish, it's a converted Perry Wars of the Roses figure meant to represent a wounded Jinete or Spanish Infantryman. A head swap and the addition on an Adarga have brought the figure from the 15th Century into the early 16th Century.

The re-enactment season is again in full swing, not that I ever make it to many events! I re-enact the Wars of the Roses rather than anything in the 16th Century. Over the past few years I have been trying to improve the standard of my kit and to recreate the images of 15th Century Soldiers seen in contemporary pictures rather than looking like a re-enactor. To do this I have done away with the trusted old padded jack that I wore for years but made me look huge! I wanted to try and recreate the much more fitted silhouette of the 15th century images. So I am now in a very tightly fitted arming doublet that is pointed to my hose.

The other big change was my armour. When I discovered that the costs of armour could be increased by up to 80% by having it polished or "all white" as it was sometimes called in England, I started wondering if maybe it would be better to simplify the kit and go for something more subdued but probably more realistic/authentic. So here it is below - left black from the forge, which of course would also make the maintenance of it much easier. For the re-enactment field I have had to make a concession and lace the Bevor to the top of the Breastplate for safety which there is no evidence for in the 15th Century and I also still wear my gauntlets which aren't shown here. I am meant to be representing a late 15th Century Soldier - I won't say "Billman" as who knows whether they even really existed during the Wars of the Roses, the only evidence for them comes from the early 16th Century!

I have had some time off work recently in which I played a few games of Lion Rampant - experimenting with some 16th century rules and army sizes. Hopefully I will get these posted up soon as I reckon they will make quite nice battle reports with lots of pictures to accompany them. 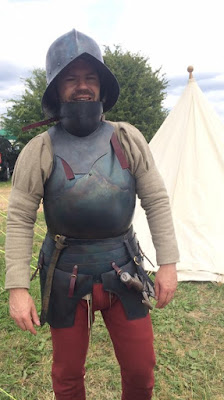