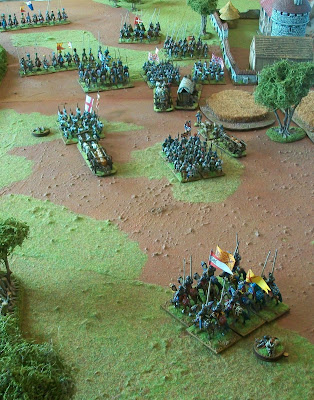 A bit of a landmark post this. It's my first Battle Report, so to speak, using only my figures and terrain. The scene is the summer of 1513 in Northern France where the English are besieging Therouanne. A supply column for the English Army is on the move, guarded by troops under the leadership of Sir Rhys ap Thomas. Sir Rhys ap Thomas was a veteran of Bosworth who played an active role in the 1513 campaign leading Border Horse and Welsh cavalry in reconaissance and skirmishes with the French. Unfortunately for the English the redoubtable Pierre Terrail, or Bayard as most of the world knows him, has other ideas about this supply column and has set out to ambush it with his Gendarme company and some supporting light cavalry.

I played the game using a scaled up version of Lion Rampant and Stuart's 1513 army rosters. The scenario is "The Convoy". In this game cavalry units are formed of 12 rather than 6 figures, but still only have 6 "damage points" and infantry units are 6 bases strong but still only have 12 "damage points". Casualties weren't removed during the game until a unit was routed or destroyed. I wanted it to be a real spectacle and look impressive as a larger scale skirmish. The photos are of the actual game, so apologies for any lighting issues and the parts of the room that show up in the background! You also get to see some of my exceptional photo editing with the deployment zones and forces labelled. The height of professionalism I am sure you will agree!


The field is as above with the English deploying in the top left corner and having to make their way with 3 convoy markers, the large wagons, to the diagonally opposite end of the board. The ambushing French cavalry deploy in the other three corners of the board with the English going first.

The forces are as follows:

The Garrison Troops represent experienced soldiers, perhaps from noble retinues or part of the Calais Garrison "Crews" as they were called. In this game they marched under the standards of Sir Richard Carew, captain of the Calais Garrison, and Sir Charles Brandon, 1st Duke of Suffolk. While they personally are not meant to be in the skirmish Carew had 1000 men under his command in this campaign and Brandon 3,200. It is from these contingents that the forces to guard convoy are assumed to have been drawn along with Sir Rhys ap Thomas's horse and a contingent of Maximilian I's Burgundian horsemen who, as will be seen, are keener on getting paid than doing any fighting!

Pierre Terrail, seigneur de Bayard and his Gendarme Company:
2 units on French Gendarmes, one of which includes Bayard
2 units of French Ordonnance Archers armed with Lances

Accompanying Mercenaries
2 Units of Stradiots or Stradiotti
1 Unit of Mounted Crossbowmen, these chaps put in an even poorer performance than the Burgundian men-at-arms!

As you can see the French force is entirely mounted representing Bayard's men and the accompanying mercenaries who have taken the field in an attempt to catch and ambush the slower moving English convoy.

The above two photos show the initial deployment of the forces. Bayard waits with his Gendarme Company at the end of the table while the Stradiots and Mounted crossbowmen have been sent forward to harass the oncoming English. The English have placed the wagons in the centre protected by the veteran infantry while the cavalry form the "wings" of the convoy. With the units being the size they were I found it impossible to keep to the rule about units being 3" apart so this was not followed. I couldn't have rules stopping the game from looking good!

The best way to follow the action is probably to read the captions under each photo. I have tried to place them in a way which tells the story of the game. It basically started with a disaster for the French as the Mounted Crossbowmen rolled a "blunder" and rode off during the French first turn! Obviously they were unhappy with pay and thought it better to sit this action out.

The English saw this as an opportunity to use a local advantage and crush the outnumbered Stradiots, with the Border Horse riding up to attack them. This was not to be and the skirmishing shots from the Stradiots sent the Border Horsemen reeling back into the English column which effectively destroyed them as a fighting unit. Flushed with success the Stradiots pressed an attack on the advancing column harassing the English archers and Burgundian men-at-arms.


As the emboldened Stradiots came forward to attack the English the Burgundian men-at-arms launched an attack on them which was successfully evaded by the skirmishing horsemen. The Burgundian horsemen then had a "blunder" result themselves and retreated back moaning over pay and the fact they weren't employed to chase these savages who they had no hope of catching in the field. The English archers, however, held their nerve and the greater power of their warbows was finally successful in driving the Greek and Albanian mercenaries off the field although the horsemens harassing attacks caused casualties.


With the Stradiots finally seen off it was time for the English to turn their attention to a much bigger threat; Bayard's Gendarme Company blocking the road ahead. Bayard himself had some awful activation roles so sat right at the end of the table for ages but the rest of his company had managed to move up, tightening the noose around the English column.

Initially it all went the way of the English with the archers inflicting damage on the Ordonnance Cavalry and the Sir Rhys ap Thomas winning the first clash of arms against the better armoured and horsed French Gendarmes. Both units of Ordonnance Archers charged the English bowmen only for both units to be seen off in a heroic defence by the English soldiers.


The English luck did not hold and Sir Rhys ap Thomas was unhorsed and left for dead in the second clash with the Gendarmes. The weight of the French cavalry attacks was beginning to tell. With the loss of their leader the English force began to falter. The heroic English archers were finally driven back into the corn fields, loosing one of the English wagons to the French. This loss was followed swiftly by another as the victorious French Gendarmes then charged the English Bill guarding a second wagon and sent them fleeing from the field.

As the French regrouped the Burgundian Cavalry decided retreat was now the best option and rode off leaving the English infantry to their fate. The English archers managed to destroy the lead Gendarme unit that had caused such havoc to the English advance but the battle had already been decided. Abandoned by their cavalry the English Billmen and Archers were ridden down by Bayard's Gendarmes and the last wagon was destroyed. Victory went to the French although Bayard would have preferred the ambush to have been less damaging to his Ordonnance Company!

I really enjoyed this game and loved how some of the units would simply not do what was asked of them. The French Mounted Crossbowmen rode off in the first turn and the Burgundian men-at-arms similarly did nothing for the rest of the game after a failed charge at the Stradiots seemed to completely demoralise them! As soon as they saw things getting tough for the convoy up ahead they were off.

Similarly Bayard and his Gendarmes were motionless for the first half of the game, constantly failing activation roles and giving the initiative to the English.This seemed to pay off in the end though as the English had a tough time dealing with the Stradiots harassing their flank and were too strung out along the road to effectively fight off the French cavalry when they did crash into the front of them. Despite some heroic fighting by the English archers the Chivalry of France triumphed.

"The Convoy" makes for an exciting scenario. The depth of the board, playing across it longways, combined with the chaos that failed activation roles can bring in Lion Rampant meant this game swung back and forth and it was hard to see who would win. Initially I thought the French would be destroyed piecemeal and it would be an easy English victory! I am keen to try this one again, possibly an Italian Wars version with the Spanish ambushing the French in a mountain pass in 1502. That could be interesting. Of course a younger Bayard will have to be present to lead Louis XII's forces!