Battle for the Gun Battery 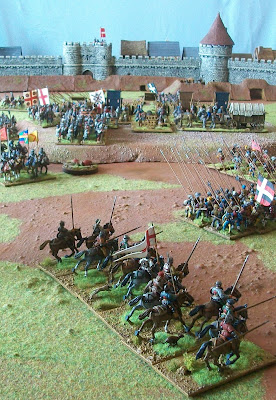 This is the second of the Lion Rampant scenarios that I played out last month, again pitting the French against the English in a skirmish set during the 1513 English Invasion of France. This time we join the English attempting to encircle Therouanne. The scenario is set when a French sally is attempted from Therouanne, led by the indomitable Bayard. The French target is an English gun battery which is being set up and looks to have been left vulnerable to attack. I don't know if Bayard led such an attack but such sudden assaults by defenders were very common during 16th century sieges, and attacks certainly occurred during the siege of Therouanne. Stradiots were noted as being particularly effective in riding out and attacking the besiegers. During one sally an attempt was made to seize an English standard, perhaps an idea for a future scenario.

In this game the French have timed their attack poorly. As they have marched around the walls to take the newly established battery in the flank the English besiegers have been alerted to the threat and have rushed to defend their guns in a force led by Sir Richard Carew, captain of the Calais Garrison. The scenario played out was "Hold on Tight", an objective in the middle of the board must be seized and held by a unit for 5 turns in order for that side to achieve victory. The objective was the space directly behind the central bombard in the gun battery, shown in the second image below. Holding this represents either the French taking control of the battery for long enough to effectively destroy it or for the English holding it for long enough to secure it. The figures forming the battery cannot take any part in the game and count as impassable terrain. The whole structure the battery is mounted on counts as rough terrain.

As in my previous "Convoy" game I scaled up the size of units but they still had the same number of damage points as standard Lion Rampant units. Again I used Stuart's 1513 Rosters, adding Landsknecht Pike as an extra unit. They joined the game as fairly tough infantry with the ability to Counter Charge against other infantry. I fielded the Landsknecht Pike as units six bases strong, totaling around 36 figures. These look good for larger sized skirmishes, making a small pike block.

The forces were as follows:

This is meant to represent a mix of English troops supported by Maximilian's Burgundian and German Auxiliaries, the Men-at-Arms and Landsknechts.

As can be seen above the French decided to sally forth with a mixture of native French troops supported by a considerable number of mercenaries in true early 16th century style.

The deployment of the two forces can be seen in the pictures above. During the deployment I tried to stick to the 3" between units rule for this game, which was quickly abandoned once the game started! I think this deployment hampered the French quite badly as it left their Picard infantry out of most of the action and seemed to allow the English to fight in a more concentrated fashion (if such a thing can ever be said to happen in Lion Rampant!). This had consequences on the game as will be seen.

Initially the two forces both rushed forward. The first clash, predictably, taking place between the skirmishing horse of both sides. Unlike in the "Convoy" game, the Border Horse attacked the Stradiots with great ferocity and caused heavy casualties. The other unit of Stradiots in French employ were more successful and managed to get to the gun battery first, securing it for Bayard. Their position in the earthworks was threatened however by the advancing English archers so Bayard and his Men-at-Arms rushed forward in order to neutralise the threat the bowmen posed.


Closer to the town walls the French Aventuriers advanced and sent a hail of bolts at the English, causing some casualties. The Stradiots holding the gun battery harassed the Burgundian Men-at-Arms. Apart from the clash between the Border Horse and Stradiots furthest from the town the advantage looked to be heavily with the French. This was compounded by the English archers who faltered and allowed themselves to be charged in their panic by the French Men-at-Arms without even shooting at them. The archers were driven back by the armoured horsemen.


Bayard's charge into the archers seemed to be the high water mark for the French. The French Men-at-Arms were charged by the Burgundians who drove them back with casualties. The remaining unit of archers not smashed by the French sent a rain of arrows onto the Stradiots holding the battery and drove them back. Closer to the town the Landsknecht arquebusiers in English service sent some of the Aventuriers back with a devastating hail of shot.

At the far end of the field the English Border horse finally chased off the Stradiots. In the centre Bayard continued to press his attack, charging the second group of English archers who were predictably pushed back. The Burgundian Men-at-Arms, who had put in a much more determined effort than the last game, charged Bayard for a second time. This time the French leader was unhorsed and his remaining Men-at-Arms scattered.

The fall of their leader seemed to stop the entire French sortie. Some of the Aventuriers fled immediately along with the Stradiots who had been holding the gun battery for the French. The Landsknechts in French service were then attacked by the remaining English archers and the Border Horse who rode closer to the town following their victory over the Stradiots at the far end of the field. This pressure forced the "French" Landsknechts back and, as the remaining Aventuriers fell back in the face of the Landsknechts in English employ, only the Picard infantry were left in any order.

As the English leader, Sir Richard Carew, secured the gun battery, these native French Pikemen wisely called it a day seeing the English Border Horse riding back towards them. They quickly marched back to the relative safety of Therouanne. The result was a decisive English victory with the French sally halted for the loss of only one unit of English archers.


A couple of things became apparent playing through this game. Firstly when Lion Rampant is played with the forces starting at relatively close quarters it can be over really quickly. When both armies are fighting for one objective, as in this scenario, this effect is only compounded and the result is inevitably a punch up pretty much straight away. Having more of the French deployed behind hedges and cottages at the far end of the field meant the English could really maximize their numbers on the French they faced, although it was the English archers combined with Bayards unsupported assault that really led to the French being defeated so soundly.

A briefer and more one sided game than I had expected. It reminded me of many games I played when I was younger that were often over very quickly, normally with my armies being sent running in record time! This game was fun nonetheless and I learnt some things about Lion Rampant from it. When I get time I will post up my next game where I returned to an old favourite of mine, the War for Naples 1499-1504, and tested out some Lion Rampant Italian Wars troops.