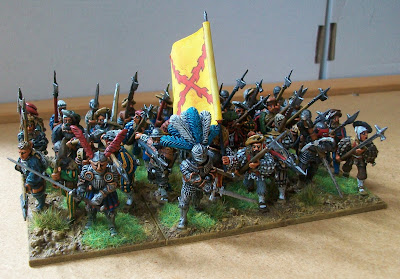 This unit was the result of a couple of things. Firstly I wanted to paint up a base of figures for each of the excellent Steel Fist Miniatures Renaissance Men-At-Arms. Having backed the Kickstarter for the figures on foot a while ago I was keen to make the most of each miniature. Of course for a lot of the figures in dynamic attacking poses placing them on a base of Landsknechts was the obvious answer. Secondly having played some games of Lion Rampant I wanted some Landsknecht halberdiers that could be used in more skirmish style games. The advantage of these bases is that while they can indeed be used for a small band of Landsknechts in a skirmish game they can also be added to my pike blocks to form even more formidable formations. At some point I will get some photos of them in the centre of a pike block around the flags, in the front and on the flanks. I am keen to see how this will look and have based them so they should fit in well with my existing pike.

So why are the Men-at-Arms with the Landsknechts in the first place? The chap in the lower quality munition harness could well be a Landsknecht himself, I will discuss him separately. The other two in full Maximilian harnesses could be Landsknecht captains, however we have many depictions of such characters and while they are often well armoured they rarely seem to be depicted in such full "cap-a-pie" harness. I think they are more suitable as dismounted nobles who have joined the ranks of the Landsknechts. This seems to have happened on occasion.

While Maximilian I himself was keen on dismounting and entering cities at the head of his gaudily attired infantry, notably Cologne in 1505 and Milan in 1516, and Henry VIII decided it was wise to position himself amongst his Landsknecht mercenaries during a French attack while on the march in July 1513, it is from the French that some of the best examples of dismounting and fighting amongst mercenary pike can be found. Robert de La Marck, better known as Fleuranges, accompanied by his brother, fought on foot with the Landsknechts in French service at the battle of Novarra in 1513. He was said to have sustained over forty wounds in the fighting! Anne de Montmorency was under nominal command of the Swiss at La Bicocca in 1522 and accompanied by other French nobles joined them in their ill-fated assault on the sunken road. He was wounded in the head and was the only French noble who joined the assault that managed to survive. I thought about painting separate bases with the dismounted Men-at-Arms and their squires or armed valets accompanying them and may return to this idea later as I couldn't think of suitable figures for the accompanying retinues.

Another question we need to address is would "Grotesque" style armour have been worn on the battlefield? It is certainly true that battlefield armours tended to be more simple and functional than parade and tournament armours. However it is also important to remember that armour was a status symbol and as much about fashion as functionality, more so when dealing with the parade elements but this still played a big part in war. What is often forgotten today is that by wearing an extremely expensive or elaborate eye catching harness, while obviously drawing attention to yourself, it was also a form of insurance policy, not just in terms of protection. Why would ordinary infantrymen want to kill you if you were dressed in such armour? Surely you must be of importance and worth an enormous ransom?

A convincing argument as to why the Swiss or Reisläufer were so reticent to take prisoners and slaughtered Men-at-Arms against whom they were fighting was that their captains were only too aware of how valuable they could be if captured and ransomed. Capturing these men would inevitably lead to a breakdown in the formations discipline and cohesion; the key thing that held them together and allowed them to hold firm against repeated charges by mounted knights. So their reputation for brutally probably stemmed from the realisation that taking prisoners could be their undoing. Imagine what would happen to a pike block if groups of men in the front kept slipping off dragging downed gendarmes with them! It wouldn't be a pike block for long.

To get back to my point about the "Grotesque" style armour what I am arguing is that is could have been worn on the battlefield, although of course it may not have been common battlefield attire. It could have served to denote status and it's high value may have acted as a useful insurance policy, meaning you were obviously more valuable alive than dead. Unless you were facing the Swiss that is! Warfare really was changing rapidly in this period and certainly becoming more lethal (if such a thing can be said) than Medieval Warfare.


The central figure above, I feel, represents well what a better armed Landsknecht may have looked like. He is in a full early 16th century harness but rather than it being a shiny Maximilian style affair it is unpolished and of munition quality. This is one of the reasons the "Doppelsöldner" were given double pay. Not only did they often fill the more dangerous front, side and rear ranks but they also owned better equipment which would justify their higher pay. The helmet is a copy of the painted Sallet from the Wallace collection shown below. Living in London and the Wallace Collection being free to visit I am lucky enough to have seen this piece at least half a dozen times!

There was no way I was going to try and attempt to paint the helmet as it is below, anyone who has read this blog for a while will know my loathing of such fine detail painting! What I have opted for instead is a red painted visor with a "scary" face painted on it, paying homage to the original. I concede it does look a little "Super Hero" but otherwise I quite like it. Even with my lack of fine brush skills there is something about those painted eyes below the eye slits that looks very sinister and disturbing!

The Landsknechts that accompany the Men-at-Arms are a mix of old Wargames Foundry and Progloria metal Landsknechts, now available from Warlord Games. The Steel Fist figures are availble here: http://www.steelfistminiatures.com/products/renaissance_knights. At some point I have to tackle the Steel Fist Gendarmes, but I am still steeling myself for such a task. I have recently completed a couple of Tudor guns which I will post up at some point as well getting some photos of these chaps in amongst the pike and possibly even seeing action in some games.