It seems like an age ago that I backed the Kick Starter for these figures by Steel Fist Miniatures. My intention was to start work on them a while back but the Irish army project became a major distraction. Gendarmes are always a project that I approach with trepidation as historically they were colourful and magnificently attired heavy cavalry and painting them is a real challenge.

Although I bought these in a Kick Starter, the figures are now available from the Steel Fist store: https://www.steelfistminiatures.com/. They have a wide variety of different heads and plumes which is great. While certainly being a 16th Century History enthusiast I am not an armour expert by any stretch of the imagination. That being said to my eyes a lot of the helmet styles that Steel Fist make are for the second quarter of the Sixteenth Century. I would argue from the 1520s to 1550s. This of course makes them perfect for my 1540s collection that I have recently been working on. When putting together the unit I deliberately chose helmets that have that slightly later feel.

There is great variety and detail in the Steel Fist barded horses but I didn't want all the Gendarmes to be on them. Barding was certainly still being used in the 1540s. The English, who had never had large numbers of heavy cavalry, made extensive use of  heavily armoured horses in France and Scotland in the 1540s. While these were often in hired foreign contingents, the Pensioners and Bulleners both appear to have been "homegrown" units of heavy horse. The most famous English cavalry charge of this era was at Pinkie in 1547 where the armoured horsemen didn't have time to armour their horses, such was the speed of the Scottish advance. The Spanish and French would continue to use barded horses into the mid 16th century, although Ian Heath, in his "Armies of the Sixteenth Century" argues that after 1550 the use of full horse armour decreased rapidly. I would imagine the cost and the specialised horses needed for this would be a factor in its decline as well as the widespread adoption of the pistol as a close quarters weapon for a lot of cavalrymen in the Mid 16th Century.


With skirmish style games of Lion Rampant in mind, I chose to put 6 of the figures on armoured horses and 6 on unarmoured steeds. The two groups can be seen in the photos above. The figures fit the Perry Plastic horses really well. I have some old Wargames Foundry Gendarmes which will fit the unused Steel Fist horses so at some point I may try a unit of Foundry Gendarmes on the Steel Fist mounts although this will require sculpting the front of the saddle on to the rider.

They took some time to put together but I think it was worth it. I tried to paint patterns on a few of the sets of barding and, as long time readers of this blog will know, I hate doing this kind of thing, but they have come out ok. Luckily the sculpts have so much detail on them that you really don't have to work that hard to make them look good. Steel Fist are about to release their light cavalry to accompany these chaps and I am really looking forward to painting up a unit of them. The lighter horse will be extremely useful in all the "small war" skirmish style games I like to play and will fit in all of my different European armies. 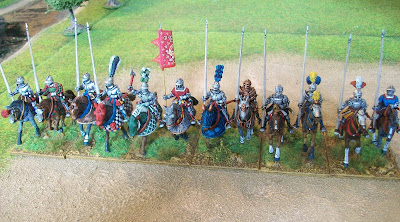