The below pictures were taken at Christmas at the end of last year when I got a chance to assemble the collection so far. I did a couple of different set ups, one with the army as French and the other as Imperialist. Its just a matter of changing the standard bearers and a few of the troop types, thats what I love about this era, most of the troops were not uniformed and fought for the various different sides.

It was also a chance for me to add my Eureka Gendarmes to the collection and I was really please with how they truned out and fitted in with the Foundry ones I already had.

I wasn't too happy with the light, the photos seemed to come out very dark. Its something I wil try and sort out.

Below are some TAG figures being used as Italian Arquebusiers, the site I took the flag designs from described the long flag on the left as Genoese in French Service and the one on the right as troops from Northern Italy; Lombardy or Piedmonte.


﻿﻿ ﻿﻿
Below is a picture of the French host arrayed. I took the French Infantry flag designs from George Gushes notes http://www.myarmoury.com/feature_armies_french.html. They were all pretty simple to hand paint so I did quite a few of the variations described. Flags are still a bit of a weakness of mine and I am slowly attempting to get better at them. For command of the French force I have painted the standard of Jacques de la Palice, a veteran of the Italian wars killed at Pavia, although he never seems to have achieved anything particularly notable as a commander, http://en.wikipedia.org/wiki/Jacques_de_la_Palice.


Below is a picture of the Imperial Host arrayed. The Italian Villa is from Hovels Spanish Napoleonic range, as is the church. The corn fields are from this site http://www.productsforwargamers.com/terrain/wallsfenceshedges.html . 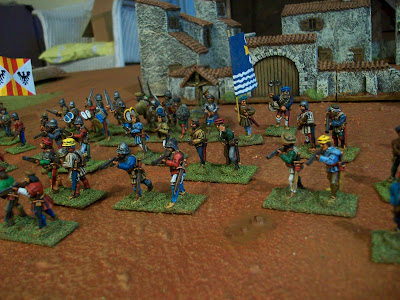 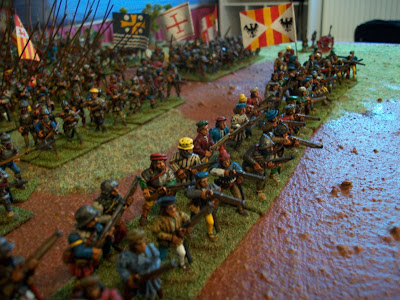 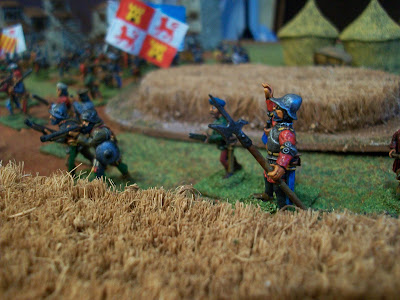 The final pic is a selection of the artillery I have amassed whilst I have been collecting and  painting Late Medieval/ Early Renaissance figures. The guns are from all sorts of manufacturers, Redoubt Enterprises, Foundry, Old Glory, Games Workshop, Dixon and Grenadier. I don't have enough crews for them all at the moment, although to be honest I think you would only need this many in a siege.