Above is the troop of cavalry I have been working on for some time now. I bought the Perry plastic men at arms set when it was released at Salute in April, more out of curiousity than anything else. I wanted to see what I could do with the figures to be able to use them for my Italian Wars collection. I have taken alot of inspiration from Stuart and Painterman's work on the perry plastics that they have shown on their superb blogs: http://stuartsworkbench.blogspot.co.uk/2012/05/perry-plastics.html http://je-lay-emprins.blogspot.co.uk/2012/06/ordonnance-men-at-arms-variations-on.html

I didn't want the figures to be late 15th century men at arms as I already have plenty of Gendarmes in the collection and the armour on the figures is a bit too early for the heavy cavalry of the 1500s and 1510s. However with a bit of conversion work I think they work excellently as the lighter type of cavalry for the first couple of decades of the 16th century. These figures are my first experimentations with the "green stuff" and I am quite pleased with the results, although I have developed a new found respect for miniature sculptures, the stuff can be such a pain to use!

All of the figures have been converted in some way. None are in full harness and all wear boots. I have modelled a few different styles of footwear on them with the green stuff. To further make them look like lighter horsemen I have given them all spears rather than full lances. Some were the spears that come with the men at arms set and the rest were cut from the plastic pikemen that come with the European Infantry 1450-1500 set. I wanted to use some of my Perry Tudor heads so I have shown the troop in more relaxed riding poses, only the Captain with his sword drawn looks slightly more ready for action. This has allowed me to show some with the hats on and the helmets on their saddles.

I took further inspiration for these figures from contemporary illustrations of light horsemen. As you can see below Durer and Dolsteins pictures are not too far off from the finished figures. I don't think they would be suitable for the later Italian wars but they will certainly do for the first couple of decades and for the early conflicts like the campaigns of El Gran Capitan, Gonsalvo, they are spot on. For this group I deliberately wanted them to be quite generic so by the switching of the standard they could be used for a variety of armies. I have enjoyed my experimentation with the green stuff and may have a go at turning another box of the perry men at arms into Spanish Jinetes with the addition of Adargas and more beards modelled on the faces.

﻿ ﻿
I have shown each figure individually so you can see what  has been done to make them look like lighter cavalry and to bring them more into the 1500's. I have gone for lighter helmets on all of them to make them look less like heavily armoured knights: 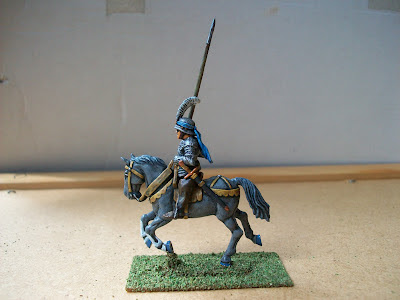 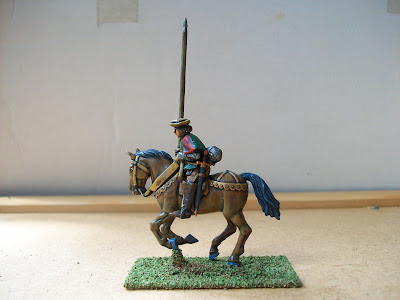 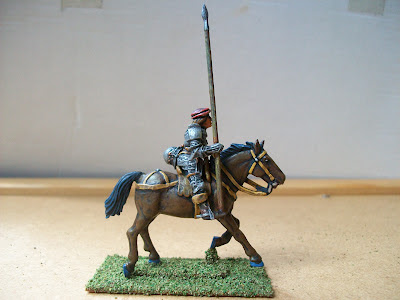 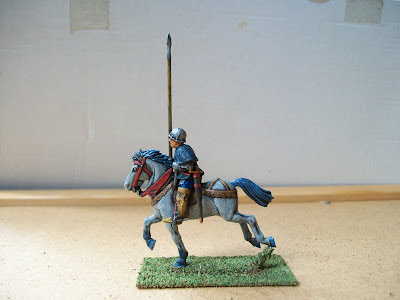 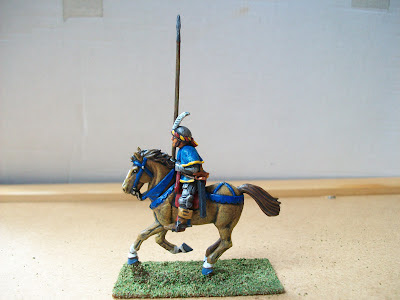 The below standard is interchangeable so the figures can represent horsemen is various armies. You may notice I have had a go at modelling on extra horse trappings. Its fiddly work but I am pleased with the result: 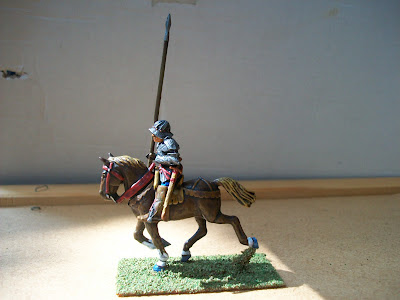 I have modelled beards onto the two figures below, the captain and a fellow horseman. If I have a go at turning another box of these miniatures into Spanish Jinetes I will definitely use this trick to make them look less 15th century. The Captain's horse also has some extra trappings added: 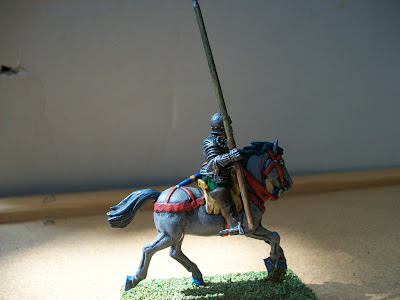 For the last two figures I have attempted the down turned riding boots shown in late 15th early 16th century illustrations. The Osprey book on the Swiss at War has some plates with soliders wearing these and I have seen contemporary illustrations of the German Peasants revolt with riders wearing this style. They are long riding boots that have a split at the back and have been turned down to create a flared effect. I didn't get the look correct on the first figure but feel it works a lot better on the second: 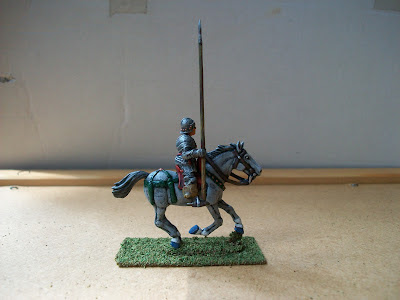 Finally, some more shots of the whole group: 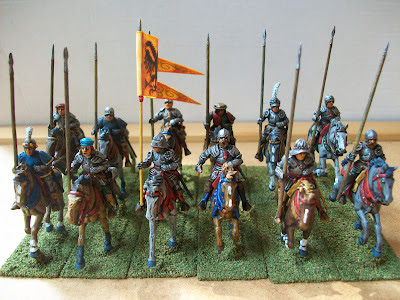 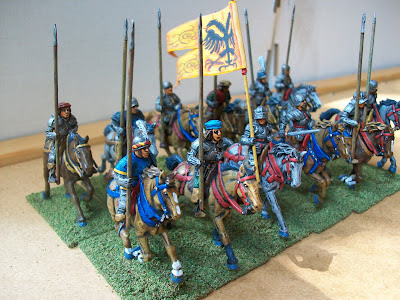