The last figures I have painted are from the excellent new Perrys European Armies, 1450-1500 range. As such they are for the very early part of the Italian Wars. I will probably mix them in with the TAG Italians I have already painted, some are pictured here http://camisado1500s.blogspot.co.uk/2011/12/italian-crossbowmen-and-hail-shot.html to make them look a bit more suited for 1500-1510. There don't seem to be many pictures of Italian infantry from the Italian Wars but I have posted some interesting pictures below. Both are from frescoes in Italian Castles. The figures in the first are not soldiers but what is interesting is that although the fresco is from the 1520s they still look very similar to the Perry figures. Saying that the soldiers that are depicted in another fresco in the castle look like Landsknechts. The second picture is of garrison troops around 1500, you may recognise it from the Osprey book on Pavia. They look very much like the TAG Italians. I think when the two sets of figures are mixed in they will be great for the armies of the Venetians in the early Italian Wars, Cesare Borgia or Julius II. ﻿
﻿

I love the figures with the Swords and Shields shown below but I hated painting the shields! Some I had to redo about 4 times! I did not want them to be for a specific Italian faction, so they needed to be generic and I wanted to try and get them to look something like the designs on this site: http://www.ugopozzati.it/Rotelle-Milanesi.htm . The problem is the designs on the site are way too difficult for me to paint so I went for simplified designs that are similar or have similar patterns. I am quite pleased with them but they took ages. I hate painting designs like this free hand.
Another pet hate of mine is painting striped hose. I try and avoid painting them when I can but these figures are just crying out for them so I gave it ago and I am pleased with the results although there is still a lot of room for improvement.The Florentine Banners are by Pete: http://thegreatitalianwars.blogspot.co.uk/ . I made the standards interchangeable so the figures can be used as Papal Troops, Milanese, Florentines or Venetians, the flags just have to be changed. I am looking forward to see what the Perrys do next in this range.

The above photo is of another converted regiment, this time they are the old citadel Marksmen of Mirigliano that I bought off ebay although it looks like they are still available, but expensive, on the Games Workshop site. I am pretty sure they were sculpted by the Perries and I feel they fit in well as crossbowmen in the early Italian wars.

The above and below photos are of my Spanish infantry, mostly Assault Group and old Wargames Foundry figures.The blue and red banner is for Pedro Navarro, http://en.wikipedia.org/wiki/Pedro_Navarro,_Count_of_Oliveto . An interesting character of the Italian wars with possibly a background in piracy, he was an excellent siege engineer. He fought first for the Spanish and later for the French so this flag could be seen flying in different armies at points. For the early war in Naples I am not sure if this was his standard as he was not made Count of Oliveto until after the battle of Garigliano in December 1503. The flag is a Freezywater one taken from the Lance and Longbow Society book on Marignano in 1515 (by which time Navarro was fighting for the French) and is based on conjecture.
The below photos are of another set up. I was keen to see what opposing armies I could muster for the early war of 1499-1504. This is them, the Spanish sallying from an Italian town to defend against the French. 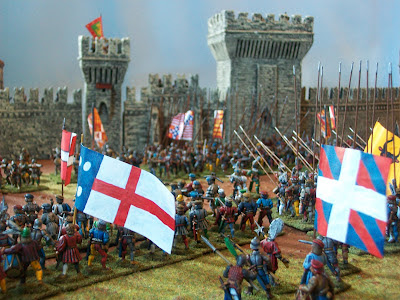 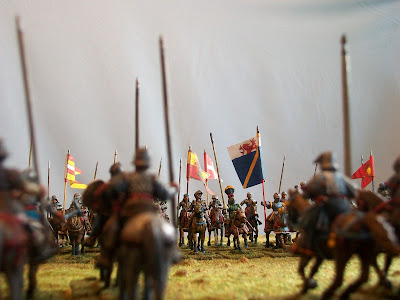 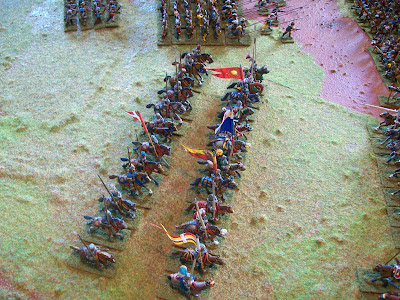 ﻿﻿﻿﻿
﻿ The below photo, which annoyingly is a little out of focus, is of a troop of Italian Horsemen. All the figures are by the Assault Group, some are Italian Elemti and the rest are from their renaissance Spanish range. I really like these figures and find they give a really good feel for the period as they don't look like medieval knights and yet they have not quite reached the flamboyance of the Gendarmes.

The above and below photos are of Assault Group and Perry Miniatures figures. When I want to create specifically Italian looking infantry I will mix in the miniatures from the new Perry Condottieri range with these. With the wide variety of head gear and clothing I really like these figures and find them suitable for about 1490 through to the 1510s.
The final photos are of my Reisläufer. The figures are mainly by Artizan. I think they are more suitable for the ealier Italian wars than the Landsknechts Artizan make. The clothing of the Reisläufer Artizan figures is deliberately of a simpler style than their Landsknechts. The below contemporary picture of the Battle of Dornach in 1499 where the Swiss defeated the Swabian League is a good example of how these mercenaries would have looked at the turn of the century. The big hats and big plumes of feathers are already in evidence (have a look at the banner bearer in the top left hand corner for the feathered head dress). The picture is also worth noting for the armour the horsemen are wearing, they still look very much like medieval knights.﻿

As you can probably tell from this post I have been taking a second look at how the styles changed in this period. I have been going through my book collection, J R Hales "Artists and Warfare in the Renaissance" is particulary good, and having a look on the internet. The problem is the more I look into it the more confusing things become. The styles change rapidly. Below is a picture of some landsknechts (and possibly a stradiot?) by Dürer c.1500. The figures look distinctively like landsknechts yet they also look distinctively different from the slightly later Landsknecht styles with the huge puffed sleaves and leather jerkins of the 1520s and 1530s. Another thing I have learnt is that a lot of artists lifted motifs and images directly from older works and incorporated them directly into their compositions. This would mean that although the picture may be from a later date some of the images in the picture may not be. Sometimes they kept the poses of the figures they lifted and updated the clothing but not always. Its pretty confusing! On the plus side however there is an abundance of pictures for the era which is great. They are great inspiration for collecting the armies.