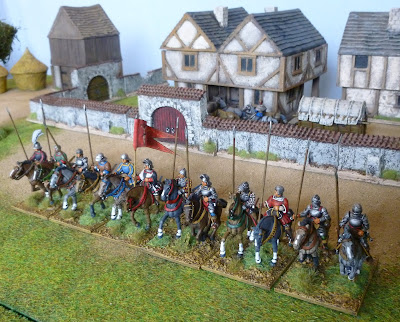 Following on from the completed Steel Fist Gendarmes here are some photos of their recently released Italian Wars light cavalry, https://www.steelfistminiatures.com/product-category/italian-wars-1494-1538-product_cat-19/renaissance-knights-product_cat-19/. They are really useful figures and could be used to represent the lighter armoured "archers" that supported the French Gendarme Companies, Maximilian style light cavalrymen, English Demilancers, even Border Horse or Jinetes with some conversions and additions. It all depends on how you decide to paint and build them. The miniatures come open handed and with lots of different head options which adds to their versatility. I have used all of the different sallet wearing heads that the figures come with along with some other Steel Fist heads, some Perry Miniatures Plastic ones and one from the Warlord Games plastic Landsknecht. All of the dozen figures shown here have different headgear.

I try to be as versatile as possible with my collection so mine have been painted up as fairly generic spear armed light cavalry that can be used for all sorts of different armies depending on a simple flag change. I did toy with the idea of doing them as English mounted archers but I think I will see what Steel Fist make next before working out how to convert a unit of them. Those who have read the inane ramblings of this blog for a while may recall that Italian Wars light cavalry in various forms have been something I have focused on a few times with Jinetes, http://camisado1500s.blogspot.com/2015/07/perry-light-cavalry-jinetes_4.html , Mounted Crossbowmen, http://camisado1500s.blogspot.com/2016/08/maximilian-mounted-crossbowmen.html and lighter armoured riders similar to these chaps, http://camisado1500s.blogspot.com/2012/07/italian-wars-light-horse.html, all being figures I have converted in an attempt to get more accurate representations of them for the tabletop.

What is great about these figures is how the armour styles and the long "base" coats really evoke the feel of the early 1500s. I have posted examples of contemporary artwork showing light cavalry before, have a look at the links above to the Mounted Crossbowmen and Lighter Armoured Cavalry for some period images that show how these horsemen would have looked. Of course I couldn't resist posting up some more examples of these "lighter" (some are still fairly heavily armoured!) cavalry. I feel the horsemen with the sallets and unbarded horses in the depicition of the Duke of Lorraine, below, are particularly close to these miniatures. The "Schweizerkrieg" image I have posted before but again if you have a close look at it the riders are all in sallets and are a good match to these figures. The third contemporary image is of a much lighter armoured rider, I have posted the more famous Dürer image of a rider in a sallet before but I thought it would be of more interest to post up an image seen less often. Any excuse to shoehorn another Dürer image into a blog post!


Finally some of you may like to see how the light cavalry rank up with their wealthier comrades, the Gendarmes. I think the two sets of figures complement each other really well. I have swapped out the metal lances for wire spears on the lighter horsemen but it would be interesting to see how they worked if they were all armed with lances. In terms of matching with other manufacturers these are big figures that are larger than the Wargames Foundry, Eureka or Assault Group mounted figures for this era. They do match really well with the Perry Late Medieval Plastics, as demonstrated in the photos below, and this opens up the possibilty of some great potential conversions or part swapping between the different sets. I am keen to see what comes next from Steel Fist for the Italian Wars range.