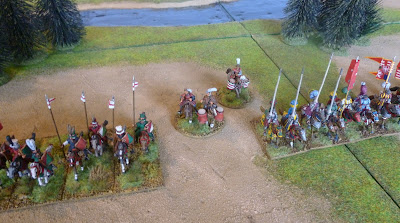 The eastern European theme continues with a couple of command bases and some mounted musicians, all of which will bring a more Hungarian flavour to the wargames table. The first base, with a captain in full harness and wearing a hairnet is inspired by one of the  Hungarian captains seen in the Weisskunig, shown below.  The figures are a mix of converted Assault Group and Steel Fist miniatures. The Captain has the hairnet head from the Warlord Games Plastic Landsknecht set. With the addition of a moustache he really looks the part. The drummer is a 17th century Polish Haiduk miniature with the, now ubiquitous, long loose sleeves added in green stuff and long hair sculpted on to bring him more into the early 16th century. As with the Hussars for this army, Gyozo Somogyi's "The Army of King Matthias 1458-1526"  https://www.amazon.co.uk/Matthias-1458-1526-Gyozo-Somogyi-2014-05-04/dp/B01FKUVRR4/ref=sr_1_1?dchild=1&keywords=armies+of+king+matthias&qid=1604313164&sr=8-1 has been a great source of inspiration for these bases. The photos below show the first command base added to a couple of my more generic early 16th century pike and crossbow units.


The second command base is a mix of old Citadel Miniatures, Assault Group Haiduks and a Wargames Foundry priest. All, apart from the priest, have had some conversion work done on them to make them more suitable as Hungarians for the 1500s. Below are some pics of them leading a heavy infantry unit and some crossbowmen. I am working on specialist infantry for the Hungarians at the moment but I also like the idea of being able to use the generic stuff I already have. These two bases, when put at the forefront of units, help to change the look of them and give them a more eastern European character.

The "Battle of Orsha" painting is still serving as a great source of inspiration. Next up is a mounted band based on the one in the painting and shown in the detail above. This will be a really useful addition to the collection as the Imperialists were also fond of their mounted musicians, as demonstrated by the Hans Leonhard Schäufelein image above from 1537, so these chaps would be great for later Italian Wars games. For my base the two riders are both converted Wargames Foundry figures and the drums are from Essex and covered with green stuff in an attempt to match the red cloth on those in the Orsha image.
The final kettle drummer was inspired by an illustration in Gyozo Somogyi's book. He is a converted Polish drummer from The Assault Group. I have added the cloth covering to the drums and painted on the Hungarian colours to match those in the illustration. The Hungarian "conversion army" is really starting to shape up. Hopefully the specialist infantry to join them will be completed in the next couple of months.