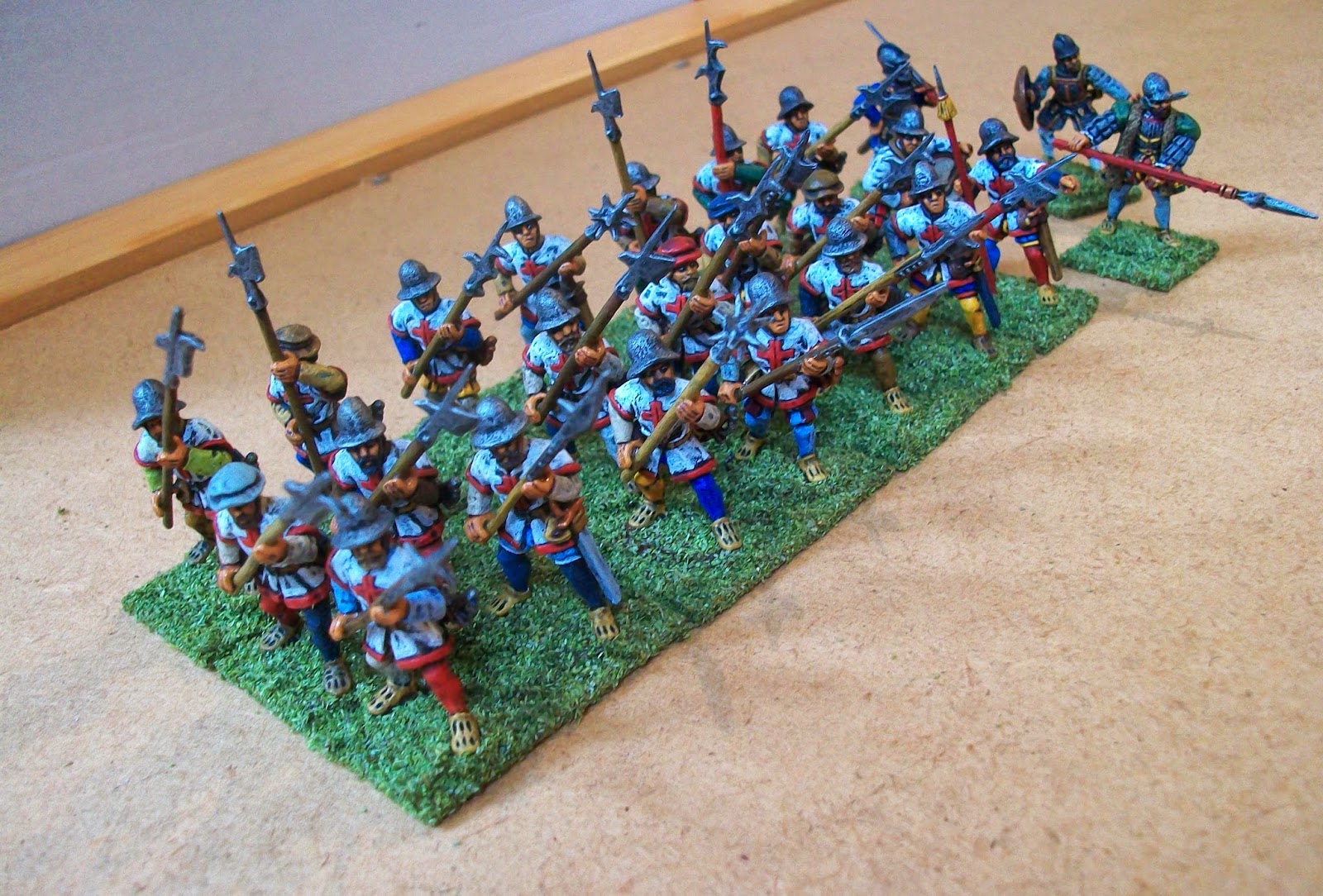 Here are the next group of figures for my Tudor Infantry Company, the billmen. After days of sunshine the weather has now gone grey and overcast so my apologies that the pictures are a bit dark. Following on from my last post I am painting this company in white coats with a red border and St Georges crosses on the back and front. I have gone for a slightly less flamboyant look with these figures compared to the arquebusiers and I prefer it. With the bright uniform coats I think that if the hose and jackets are also painted in gaudy colours it can all become a bit too much.
Painting up the billmen meant I got to go back through my old bits and pieces boxes and find a great variety of nasty looking polearms for them to wield. They carry an assortment of bills, halberds and glaives with a couple of figures carrying the "holy water sprinkler", basically a morning star on the end of a pole. It always seems to crop up in descriptions of Henry VIII's armies in the 1540s so I felt I couldn't do this group without at least a couple! These various polearms were a mainstay of English armies in this period even when most of the continental forces had long moved to the mass adoption of the pike. The bill would remain in English armies into the Elizabethan era, although in ever decreasing numbers amongst the more professional English soldiery fighting in the Netherlands.

I decided to make a few changes to the command group shown below. The pose of the second figure from the left was crying out for a two handed sword so I have painted him up as a "Whiffler". In my previous post I discussed a few great books for this period and will refer to a couple of them again here. In his "Armies of the Sixteenth Century", Heath has the following to say about this rank of English solider, I will quote it at length as I love this kind of detail:
"In mid-century England the 'whiffler' was generally the junior officer of an infantry company (though occasionally cavalry whifflers are also met with). The word first appears in 1539, when, at the muster of the London militia, 400 are recorded, of whom 120 each were assigned to the three infantry wards, their job being to maintain order in the procession. This is a capacity in which they are also found in 1544 and 1548, so that they were already performing some of the duties of the sergeants who eventually replaced them. In the St Quentin campaign of 1557 the small retinue of the Captain-General of the Footmen included six whifflers, listed immediately after the Sergeant-Major whose assistants they may have therefore become by that time".
With regard to their appearance and equipment he goes on to state: "The whifflers of 1539 were described as 'proper light persons apparelled in white silk or buff jerkins, without harness, with white hose and white shoes, every man having a slaugh sword or a javelin to keep the people in array, with chains about their necks and feathers in their caps'. The reference to their arms - javelin and 'slaugh sword' - is particularly  significant since the very name 'whiffler' derives from an Old English word, wifel, meaning a javelin, long-handled axe or long sword. Contemporary pictures of whifflers always show them with two-handed swords (called 'slaughter-swords' by the English from the German Schlachtschwerter or 'battle-sword'), marching at the head of their companies with the musicians and ensign. The very last notice of the rare use of slaughter-swords amongst the English, dating to 1590, is an observation that they used 'a few slath swords for the guard of their ensigns'. This may also provide a clue to the final role of the whifflers".
So here is one of the Whifflers with his slaugh or slath sword over his shoulder. A great figure by the Assault Group. He is wearing harness unlike those mentioned in the quote above. Although those in the London procession were unarmoured the illustration of a Whiffler that accompanies the above text is of a man dressed very similarly to this figure, however he is wearing a cap and not a helmet. I also decided to change the standard bearer or ensign from the command group and depict another Whiffler. In the "Anglo-Scots Wars", Phillips states that "Early in the century the immense two-handed 'slaghe sword' was a favourite of the whiffler, who performed the function of an NCO, 'to keep the people in array'. By the middle of the century the whifflers, in tune with continental practice, seem to have abandoned the two handed-sword in favour of the one -handed sword and buckler combination". It seems the two-handed sword was not that common, but was seen even into the Elizabethan period, so I am only going to have one figure carrying one. What, however, became more common, was the sword and buckler or 'target' that the large buckler is commonly called in the later 1500s.
As part of his argument that the Tudor armies were  'modernising' in the 1540s Phillips describes an English force, 308 men strong. It was operating from an English Garrison in Scotland, Broughty Craig, in February 1548 and under the leadership of an Italian mercenary captain called Tiberio. I will probably return to talk about this force in a future post as I am kind of basing my smaller English company on it. What is interesting about this group of 308 with reference to the Whifflers is that it included 20 of them, all armed with swords and targets. They were used as skirmishers on the wings of the main formation, fighting in conjunction with the archers. Interestingly this is a very different role in combat from that described by Heath where those with two-handed swords seem to be protecting the colours rather than on the wings skirmishing. It seems they could fulfill a variety of roles but were definitely some kind of prototype junior officer or NCO.
So the ensign from this command group, figure on the right, is shown here with a metal target from Redoubt Enterprises. The Captain in the green cloak also carries a Partisan like pole arm from Reboubt, with a studded haft. Its actually from their pack of Ottoman Turkish polearms but I felt it had a very Tudor feel to it and fits in well as the kind of fancy weapon the Captain may carry. If I was being 100% accurate I really should  have painted St Georges crosses on the 2 Whifflers harnesses but I like the fact these figures could be used for other armies in the 16th century so have not done this. In fact as they are not uniformed I think the 2 Whifflers could probably be used to represent soldiers from around 1535 all the way up to the 1570s at a push. The Drummer and Captain are more specifically for the middle of the century. They next part of the Infantry Company on the painting desk at the moment can also be used for quite a large time scale and for a variety of armies, the pike.