Following on from the command groups in my last post here are some infantry for the Hungarian army. While researching this army it has become clear that pavisiers were still an important troop type in Hungarian forces, certainly up until Mohacs in 1526. In his in depth study of the Hungarian military, "From Nicopolis to Mohács - A History of Ottoman-Hungarian Warfare, 1389-1526", Tamás Pálosfalvi states when talking about the army that was defeated at Mohacs: "Secondly, the army contained a considerable number of infantry forces, probably around 10,000. Most of these were recruited in the other Jagiellonian lands, primarily Bohemia and Moravia, the rest raised by the Hungarian lords and nobility but presumably from the same pool of mercenaries. The majority of these footmen, however, were not Swiss- or Landsknecht-type infantry armed with pikes and halberds, but handgunners (commonly referred to as pixidarii in Latin sources and scopetieri in Italian texts) protected by a considerably smaller number of pikemen and pavesiers". Similary Martyn Rady, in his essay "Jagello Hungary", when discussing the preparations earlier on in the campaign states "The muster of troops undertaken in Buda in July 1526, in readiness for the Mohacs campaign, indicates 2,500 hussars and 1,200 heavy cavalry - itself an interesting comment on the relative decline of the heavy cavalry - but then goes on to relate that overall there were 4,000 horse and 3,000 foot, mainly comprising harquebusiers and pikemen. Many of the footsoldiers were equipped with great shields and pavises that were 'as big as a man' as well as with iron-tipped pikes. Most of these were doubtless mercenaries, but we know that nobles also fought as foot soldiers". It was these pavise armed troops that I was keen to recreate for my collection. The issue was what did they look like?

Yet again the "Battle of Orsha" painting provided me with inspiration for these figures with its depictions of armoured pavisiers, shown above. This set me on a search for other examples of these troops and it turns out there are some great images of them. Another excellent source is Maximilian's Triumphal Arch, produced in 1515 but printed a few years later. Three of the plates in the arch, shown below, depict Bohemian style infantry both in Maximilian's employ and as his opponents. In the "Expulsion of the Hungarians from Lower Austria" woodcut, illustrating his campaign of 1490, they are depicted fighting alongside Landsknecht. In the image of Maximilian conversing in seven languages some of his soldiers are cleary armed in this style, in fact none of the infantry he is in coversation with in this image seem to be depicted in the classic Landsknecht dress. The Wenzenbach plate from the Triumphal Arch has a superb image of the pavise armed infantry, the front ranks of which are all in deep "German" sallets with bevors protecting their faces. It is interesting to compare this Wenzenbach image with one from a decade or so earlier, also shown below, where the Bohemians in the employ of Ruprecht of the Palatinate are depicted in much lighter armour.

A final image of interest is Nikolaus Meldemann's 1529 depiction of a Bohemian Hauptman and his bodyguards, both carrying ahlspiess. From all of these images it is clear that all manner of polearms were carried by these infantrymen, but the ahlspiess seems to have been something of a speciality of theirs. A dusack, a sword with a single edged blade perhaps similar to a falchion, was one of their disctinct weapons which can be seen being carried by one of the bodyguards below. The Bohemians were also known for using throwing axes. If you look carefully at the depicition of Wenzenbach from Maximilian's Triumphal Arch it looks like one of the figures behind the four pavisiers is indeed about to throw a short hafted axe.

The problem was how to build units of these infantry for the wargames table?  No manufacturer makes these specific troops.  Modelling them on the images discussed I was keen to have the troops armed with a wide variety of polearms as well as the pavises. It does seem like some of these troops may have only carried the pavise, and perhaps a sidearm, but in an attempt to replicate the troops shown in the above images I wanted them armed with glaives, ahlspiess, spears and halberds. I decided to use a couple of different standing pikemen and command packs from The Assault Groups Italian and Spanish early Renaissance range. Once their heads were swapped with Perry plastic sallets and they were armed with a whole variety of polearms from various manufacturers I felt they would look the part. I worked on a few sample figures which turned out well before committing to building the whole force.

Another big issue was how to do the pavises. Anyone who has read this blog for a while will no I loathe painting shields and heraldic details of any kind! As part of their Hussite range 1st Corps make some lovely pavises and Little Big Men studios make some incredibly detailed transfers to go with them. Initially I wasn't keen to use these as I wanted specifically Hungarian infantry for the army and I also felt that many of the designs were simply too "Hussite" or "Taborite" to fit in. As I looked further into the Hungarian army of this period it became clear that Bohemians fought in their thousands in the army, the Jagiellonian monarchs also being Kings of Bohemia. It is clear that they still followed their Hussite faith, to such an extent that when Ruprecht of the Palatinate hired an army of Bohemian mercenaries to face Maximilian in the Landshut War of Succession, 1503-1505,  Maximilian was able to use this as a pretext to claim money from the Papacy and offer Crusading indulgences to those taking part! Based on this I have used the Hussite transfers, but have still tried to put the more overtly Hussite ones in the rear rank.

The decision to have two ranks of pavises was based on a few things. It makes the line look really solid and also gives some depth, similar to the contemporary images. I also wanted to be able to use the figures either with handgunners and crossbowen behind them, as shown in the photos, but also possibly in units of their own, maybe for assaulting fortified positions as they seem to be doing in "The Expulsion of the Hungarians from Lower Austria" woodcut shown above. When placed in file the double ranks also give an effective marching look, similar to one of the depictions of the pavisiers in the Orsha painting.

They are shown below in the service of Hungary with my generic pikemen, arquebusiers and crossbowmen placed behind them. The project involved 72 miniatures, pavises and transfers. They were armed with 72 polearms, 5 of which used a plastic rondel from the Perry plastic Wars of the Roses kits to turn a simple spear into an ahlspiess. Of the 72 miniatures used 63 had headswaps to make them more suitable as Bohemian infantry, with lots of sallets and kettle hats being used. This means that to make 12 bases of the pavisiers required 356 components. Not a project I would undertake again lightly! They may not be perfect, I have nagging worries that too many French and English style sallets were used and that the transfers may be a little too early but as with my Ottomans I have had to make a few compromises as no manufacturer makes a specific range for early 16th century Hungarians or Bohemians. Despite this I like the overall solid look they give and the headgear really helps to get the right feel for the unit. The faces of nearly all the front rank of infantry are covered matching the Triumphal Arch woodcuts.

Lots of photos of them are below. Not only are they useful for the Hungarian army but they can also be used for the Landshut War of Succession to face my early Landsknecht and Men at Arms. Now to get planning a refight of Wenzenbach... 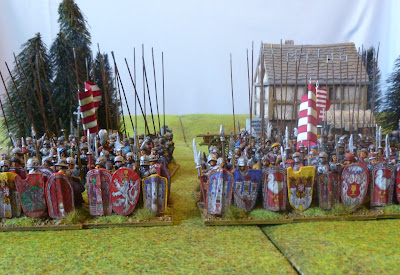