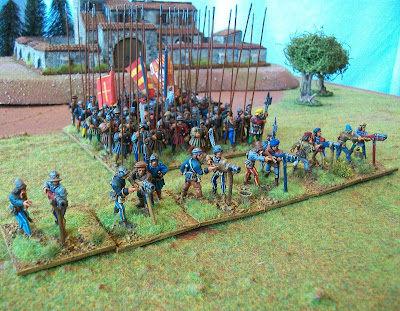 The pictures below are of another small project I have worked on in recent months. I already had some of these Grenadier figures, they call them Giant Handgunners, and posted them on this blog a few years back: http://camisado1500s.blogspot.co.uk/2011/12/italian-crossbowmen-and-hail-shot.html. I spotted some more packets of these figures at a stall at the SELWG show last year and here they are, based up and added to the original sets.

There have been quite a few head swaps and a couple of TAG figures accompany them on two of the bases. The figures are intended to be for fantasy but I think they fit rather well into the early 1500s when gunpowder weapons were far from standardised and all sorts of different types were in use at the same time. This style of weapon would probably have been quite dated by the 16th century, more suited to the 15th century, although saying that they do remind me a bit of the Hail Shot pieces that were retrieved from the Mary Rose which sank in 1545. As you can tell from the title I am not really sure what to call these guns. Let me know if you think there are a little too early or too fantasy in style.

With the head swaps and addition on the TAG figures I have tried to make them suitable for the 1490s into the 1510s. I doubt they would really have taken to the field in some kind of unit as shown in the first three photos. That is if they took to the field at all, they look like they would be far more suited to firing from defended positions which is of course how the Spanish preferred to deploy their shot armed troops in the early stages of the Italian Wars. I have shown them integrated with other Arquebusiers which I think works really well and also within a Spanish Infantry formation as a whole. In the last few photos the pikemen are flanked by shot armed troops who are supported by sword and buckler armed Rodeleros. I think the new bases work well with the other figures, the fact there are only two of them on a base doesn't seem to harm the overall look when mixed with the more densely based miniatures which I am glad about. 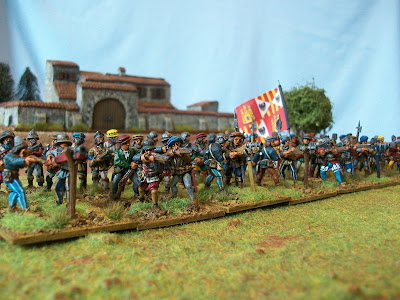