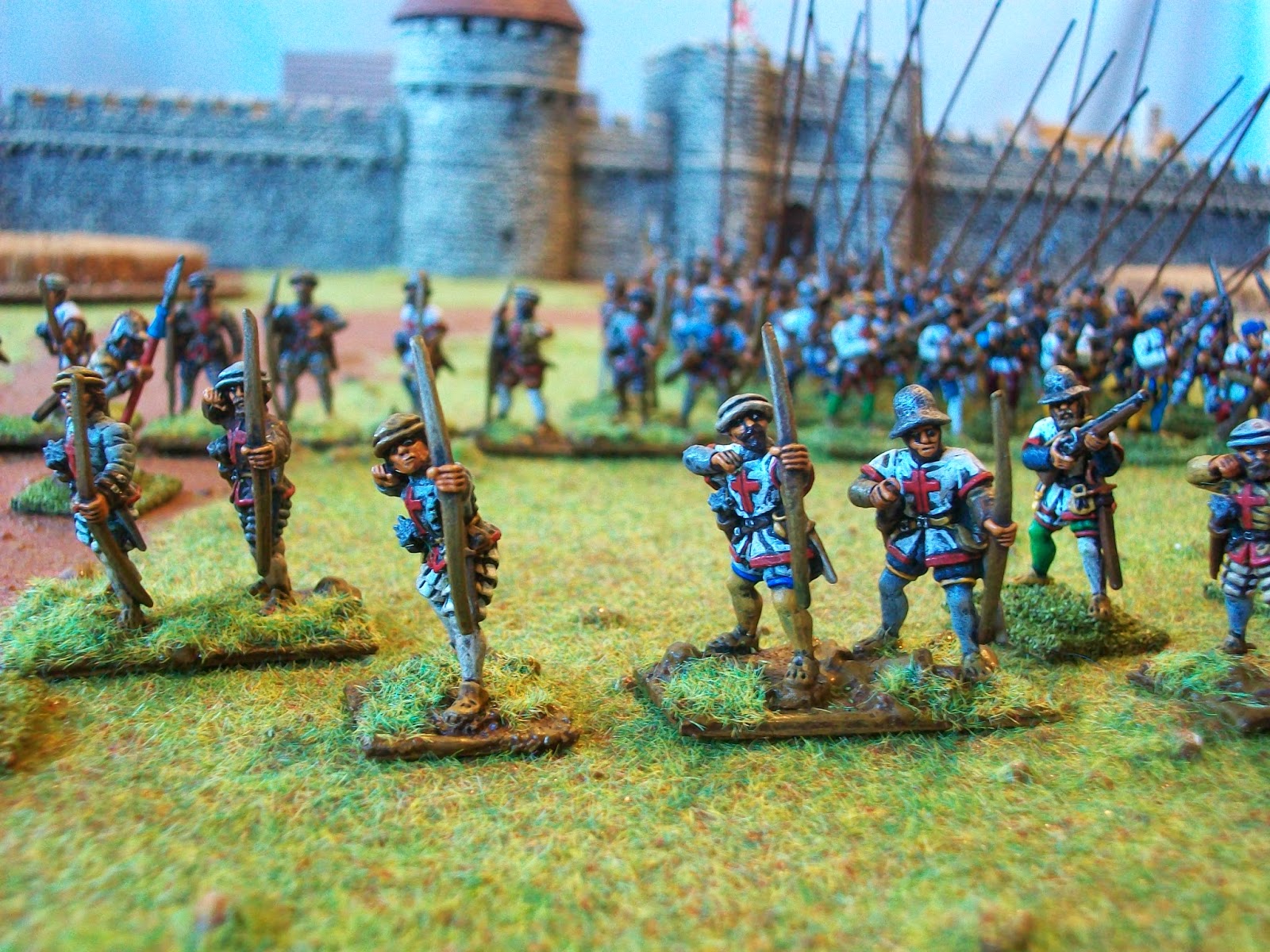 Here is the finished company of Tudor infantry that I started back in February this year. The figures are all by The Assault Group. The first set up is of 100 miniatures representing an English Infantry Company of the late 1540s. I say late 1540s as most of the English troops in this decade were still fighting with the traditional English weapons of the warbow and the bill. The 1540s was a particularly bellicose decade for the Tudor army, one that saw them fighting on two fronts, France and Scotland, after nearly two decades of relative peace (a serious rebellion in Ireland and the Pilgrimage of Grace could have caused far greater problems than they did). It was during this return to more sustained warfare that Tudor Military tactics evolved. This intense period of warfare was possible as Henry VIII had taken over the Churches property in England which meant he could raise armies and hire mercenaries on a scale not previously possible.
By the end of the 1540s the Tudor military machine had adapted to the continental adoption of Pike & Shot in its own unique fashion, which these troops demonstrate. The formation is based on one in Gervase Phillip's excellent Anglo-Scots Wars, http://www.amazon.co.uk/Anglo-Scots-Wars-1513-1550-Military-History/dp/0851157467/ref=la_B001KIKD30_1_1?s=books&ie=UTF8&qid=1415216658&sr=1-1, which I have mentioned before. In this he explains how by the late 1540s the English had fitted Pike & Shot into the traditional English fighting style of bowmen and men-at-arms. During the Rough Wooing, England's attempt to conquer Scotland by forcing the marriage of Edward VI with Mary Queen of Scots, the Tudor Army under Protector Somerset occupied the Scottish Lowlands and attempted to hold them through a number of garrisons. In February 1548, a company was formed from the garrison of Broughty Craig, that was to land from ships and harry the Scottish countryside. It was a force formed of English troops and foreign mercenaries, numbering 308 in total. They were captained by an Italian Mercenary named Tiberio. The exact composition of this raiding force has survived. It contained 20 arquebusiers and 20 bowmen as skirmishers. A main battle of 4 ranks of arquebusiers, 7 ranks of Pike and then 4 ranks of Billmen at the rear. This main block then had two wings of a total of 40 bowmen supported by 20 sword and bucklermen or targeteers, these were the "Whifflers" I described in an earlier post.
While I don't have 308 figures here I thought it would be interesting to set the troops up to demonstrate this formation. So below you will see a mixed skirmish force of arquebusiers and bowmen, supported by a block with more arquebusiers in the front ranks backed up by the pikemen with the billmen at the rear. Unfortunately I only have 2 Whifflers carrying Swords and Bucklers so the "wings" of the battle are comprised only of further bowmen. While not being an exact representation of the landing force it clearly demonstrates the formation they used and shows how the continental styles of warfare were being adapted to fit in with the English fighting traditions. These troops would have been contemporaries of those that sank on the Mary Rose and having seen the size of some of the warbows that were brought up from the wreck I have no doubt the archers would still have been formidable opponents even if the archers time was coming to an end. Of course having firearms which were no harder to manufacture than a good warbow, could be used with very little training, required far less physical strength and packed a greater punch (no matter what physical condition the user was in) would soon mean that by the end of the 16th century the bow was no longer part of an English Infantry company.


The last photos are of an English company, possibly depleted by disease and desertion and the fact the captain has a lot of "deadpays" on the muster, with the traditional Bow & Bill. I think The Assault Group have done a fantastic job on these figures and I am keen to see what they release next for the mid-sixteenth century. I have also noticed that some of the Pro Gloria figures that may follow the plastic Landsknechts, if they get funded, will be carrying pistols and dressed in a style more suited to the 1540s than the 1520s so they may also be a potential source of figures for this period. The middle of the 16th century is really pretty badly served in 28mm despite the fact it is when some of the biggest clashes in the Hapsburg Valois Wars took place.
I like the look of the figures when they are all together. Strictly speaking the pikemen should have St George's crosses on their harnesses but as I may use them for other armies they have been left off. I much prefer the basing style I used for the archers, and will continue to experiment with my basing. I think when the figures are all on the terrain the different bases are not too obvious, which is a good thing as I think rebasing the entire collection is too much to face!