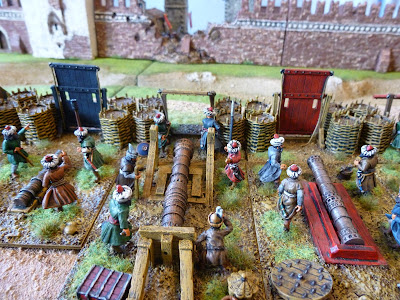 The next part of the Ottoman host has been completed. Here it is shown outside a beleaguered Venetian fortress during the Ottoman-Venetian War of 1499-1503. The Ottomans were famed for their early adoption of gunpowder artillery and some of the enormous bombards that they used, the most celebrated being in the 1453 Siege of Constantinople. Shown here are four new pieces flanked by two smaller field guns that have remained on their carriages which I finished a couple of months ago. To complement the guns there are also some new "mantlet and gabion" bases, http://camisado1500s.blogspot.com/2016/08/mantiets-and-gabions.html, with Turks manning the ropes of the mantlets.

All of the guns are by Old Glory except for the second largest on the red carriage which is a Redoubt Enterprises piece. For these large guns I have removed the wheels so they can be "emplaced" for siege or field works. On two of the bases the removed wheels can be seen lying close by. Accounts I have read of Ottoman set piece battles such as Mohacs also show that the guns were sometimes emplaced behind stakes and war wagons so the dug in nature of these suits them well. This was cetainly not something that was unique to the Ottomans as a previous post will explain: http://camisado1500s.blogspot.com/2016/09/a-bombard.html. Of course many of the gun crew may have had experience in Western armies as well.

Leading on from this point I have tried to include quite a few non-Turks to reflect the fact the Ottomans regularly used foreign specialists for their guns. There are plenty of crewmen in turbans but also some in Eastern European style head gear. The crew figures are a mixture of converted Old Glory and Essex Miniatures. I thought about including some clearly Western European types, in Landsknecht attire for example, but this would "date" the bases quite specifically so I have gone for a more generic approach. This way I feel these guns can be used from the 1450s right up to 1600 at a pinch although later style guns could also be added to a battery for the later 16th century. 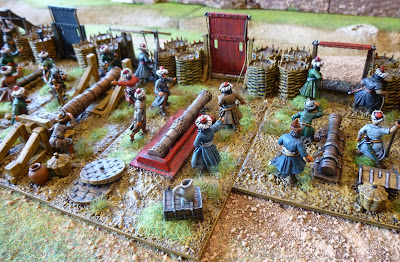 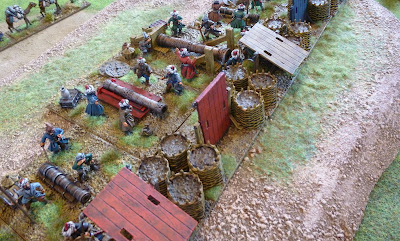 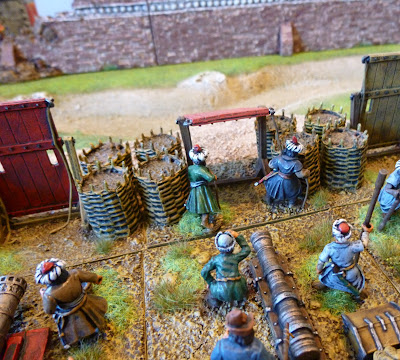 You may notice the Camel train in the above photo. A great source of inspiration for this Ottoman army, which has been quite an undertaking, was the amazing detail from the woodcuts shown in "Landsknechts on Campaign", https://www.amazon.co.uk/Landsknechts-Campaign-Geisbergs-Woodcuts-Selections/dp/0998597740/ref=sr_1_1?crid=1RT40MC2TVEFO&dchild=1&keywords=landsknecht&qid=1590579634&sprefix=landskench%2Caps%2C145&sr=8-1. While the text is fairly limited the book is really about the details from the woodcuts, it's one of those books that you can look at over and over again and always find something new. Hans Sebald Beham's Siege of Vienna 1529 is included. It's a strange "bird's-eye view" of the siege that reminds me of a 16th Century "Where's Wally"! There are loads of little details of the Ottoman siege with Turks in boats, cooking in cauldrons, taking prisoners and engaging in skirmishes with Imperialist bands of horse. These bases of camels were inspired by the print,  I have included a detail from it below.

The Turks leading the camels are Old Glory figures while the camels are really old Wargames Foundry miniatures, in fact I think they were originally Citadel miniatures. The camel at the end of the train has not been converted but the other three have all been modified using green stuff. The ropes linking them all are made from fuse wire, as are the ropes on the mantlets. I was really please how these baggage camels turned out, I especially like the base with the Turk gesticulating to the reluctant camel in an attempt to get it to move!