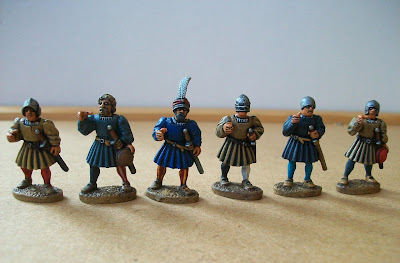 Not the most excitingly titled post to start the new year with I have to admit but I thought I would show the progress of my current project. Initially I was going to paint up 15 more Pike bases of 6 figures each to go with the 9 bases I already have in my collection and make 24 bases of generic early Italian Wars Pike. The megalomania I can be prone to hit sometime during Christmas and I have now extended the project to doing enough bases to make two blocks of 16 bases each. This means I need 138 figures to go with the 9 bases I already have! Luckily I am nearly there, I need to paint 24 more miniatures, prepare some more banners and paint about two dozen different polearms. The horror of painting all the pikes is over and they are cut, painted and ready to be glued when required.

In my last post I mentioned that I wanted more chaps in long coats as seen in many early 16th century illustrations and here are some of them. I have seen this type of garment called a Sajone for Italians, Waffenrock for Germans and a Base Coat in English. I am sure there are subtle differences between and within the national styles. They certainly help to bring the look of the troops out of the late 15th century and into 1500.

I have used The Assault Groups excellent Papal Guards pack for these troops and swapped the heads with Perry plastic heads from all of the different Wars of the Roses plastic sets. I think they work really well, the fit of the heads is very good and the large variety of styles you get in the Perry plastic sets allows a great choice of helmets and hats that were still popular in the early 1500s. Admittedly as one of the TAG figures is holding his hat and is bare headed it does mean that I have ended up with a fair few helmeted guys who are also holding a cap but as there is a shortage of figures in this style of clothing I can overlook that.

I am thinking of painting some Early Tudor troops for my collection in the future. I will probably mix some more of these miniatures with head swaps to make the Billmen. With the addition of longbows and quivers they could also be turned into more archers and this is something I may do in the future as well. I reckon they would look great with white coats and St Georges crosses on them but that is something for the another day.

Finally on the subject of future projects The Assault Group have shown the greens for their Early Landsknechts and they look fantastic: http://www.theassaultgroup.co.uk/index.php?article=274 .
To me they look suitable for the 1490s to around 1510 so they will be perfect for my early armies. They really capture the feel of the turn of the century well with the start of the slashed hose and doublets that would later develop into the more "classic" Landsknecht style of the 1520s. As soon as these are released I think a starter block of 72 figures, 12 bases, will be on the cards. They will then be able to join my Spanish troops for the War over Naples 1499-1504.