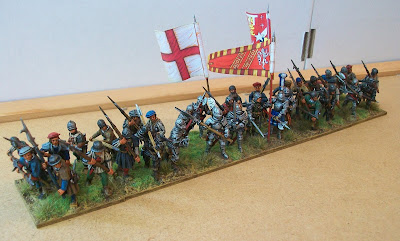 This unit is a second part to the Early 16th Century Infantry I completed recently: http://camisado1500s.blogspot.com/2018/05/early-16th-century-infantry.html .
I wanted to do a more specifically English set with Billmen that could be used for the early 1500s in campaigns on the Scottish Border or even as potential rebels for further Tudor Rebellion games. I was also keen to include some figures in outdated late 15th Century style harnesses, to represent the Gentry who were called upon to help defend Northern England or to take part in raids into Scotland in the 1510s and 1520s. When mixed with the more generic set of infantry this will give me twelve bases of polearmed troops. I can then combine these with my twelve bases of unliveried Early 16th Century Archers to make up a set of Bill and Bow that aren't dressed in green and white Tudor Livery, as, although this was common, it certainly wasn't universal for Tudor armies in the 1510s and 1520s.


I have used a lot of different bits and pieces to make this unit. The figures are a mix of Perry Miniatures, plastics and metals, a couple of Assault Group Miniatures, a couple of Steel Fist 15th Century Men-at-Arms, a dozen of Stuart's 16th Century Tudor Dollies, now available from Steel Fist: https://www.steelfistminiatures.com/product/wfd-10.-tudor-dollies/ , an old Foundry figure and even a very old Citadel Miniature! The various combinations of metal and plastic can be seen in the image above. The Base Skirt on one of the Captains, the chap directly under the Howard flags with a Poleaxe in the image below, was sculpted by Stuart Mulligan when he was attempting to show me how to sculpt green stuff - the jury is still out as to how much of this sculpting advice I have picked up!


While the first set of polearmed troops were as generic as possible I was keen to make these chaps more specifically English. To achieve this I had a few ideas. Firstly to add lots of paper crosses to the miniatures to represent the stiched on cloth St George's Crosses that could have been worn as unifying symbols when on campaigns into Scotland or to defend the border. These can be seen clearly in the photos below. Secondly I ensured the majority were armed with Bills, I will leave the "how many billmen actually carried bills" debate for another time. At least we know that by the 16th Century Billmen were definitely a "thing" unlike the mythical 15th Century Billmen! Thirdly I have included some members of the Gentry in outdated 15th Century style armours with Poleaxes. All this helps to give a very specifically English feel to them and of course makes them really suitable for any potential Flodden games in the future as well.

While most of the unit is most certainly English I could not resist leaving the two command bases as more generic. This means I can use them in some of my other armies if I choose by simply swapping the banners. The command base with the Captains in 15th Century harnesses would only really be useful for very early Italian Wars armies, up to say 1503, but for the English and Scots, who seem to have used the older styles a little longer, they would be suitable into the early 1520s. For these photos the command bases depict Edmund Howard and his retinue at Flodden. Edmund Howard took part in one of the most dramatic parts of the battle when he was surrounded and repeatedly knocked down by borderers trying to capture him. He was rescued by John "The Bastard" Heron who cut his way through when Lord Dacre's Border Horse counter attacked. This is certainly a moment I may have to recreate on the wargames table in the future!