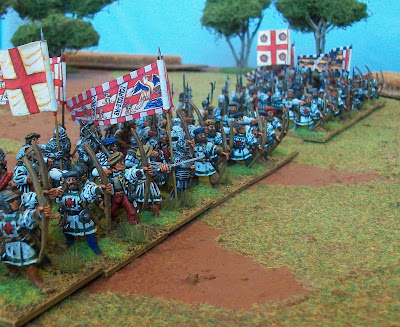 Here is the next addition for the 1513 English invasion of France. Ten bases of archers and another two Tudor command bases. As with my previous attempt at early 16th century archers, http://camisado1500s.blogspot.co.uk/2015/08/longbowswarbows-in-early-1500s.html, I have once again been back on Ebay searching for old Empire Citadel miniatures to strip of paint and convert into Tudor archers. Most were picked up for a decent price although I did have to pay over the odds for a few to complete the numbers. Of course as soon as I had bought these some very cheap lots came up which I jumped on so I will be fielding some more of these figures. These will be on Skirmish bases to represent bowmen in a looser formation.

The flags are all from Pete's excellent France 1513 Tudor flags range, http://thegreatitalianwars.blogspot.co.uk/. They are based on research done by Stuart for his superb collection of 1513 Tudors, http://stuartsworkbench.blogspot.co.uk/ . I wouldn't have had another attempt at an Early Tudor army without these flags. I think they are Pete's best work to date and they really complement the figures and bring out the flavour of the English in this period. In fact they have even had me contemplating collecting Wars of the Roses armies again but that will have to wait!

The first couple of photos show just the archers and the new command bases under the standard of Sir Henry Willoughby. He accompanied the Marquess of Dorset on his Guienne campaign (if it can be called that!) of 1512 as well as serving in the rearward in the 1513 invasion of France. I was rushed for time to get these photos and had some issues with the light so I hope they look bright enough.

As with my first attempt at these old Citadel figures I have made a few head swaps, added some Perry swords and bucklers to them and changed a few hairstyles and beards with green stuff. I have also added quivers to a few of the figures. Quivers don't seem to have been carried by English archers in the 15th century but came back into fashion in the early 16th. As all these miniatures already have a few arrows tucked in their belts I didn't want to add quivers to all of them but felt half a dozen or so would be a suitable addition. The quivers are metal pieces from Front Rank, they are quite large but that works well with these miniatures as they are about the same size as Front Ranks 28mms. A couple of pictures below show the quivers and a few of the other changes.


Of course I could not resist pairing the archers up with the recently completed billmen to see how they work together. The old citadel figures are quite large but that doesn't seem to show too much when they are all based up. While the billmen are six to a base the archers are in a looser formation of three to a base, they just don't look right in a closer formation. The first standards in the below photos are for Sir Charles Brandon, who fought in the Kings ward in 1513 as well as commanding English armies in France in the 1520s and 1544. For the 1520s campaigns these figures would still be suitable. For the 1540s however fashions and warfare had changed and the troops would look more like these: http://camisado1500s.blogspot.co.uk/2014/11/a-tudor-infantry-company.html.

The other block of bill and bow marches under the standards of two commanders present in 1513. Sir Richard Carew, Captain of the Calais Garrison and Thomas Grey, 2nd Marquess of Dorset who led the earlier Guienne expedition and campaigned in Scotland in the 1520s. I prepared these standards first as these commanders provide scope for Skirmishes in the Calais Pale in the case of Carew while Greys men could be seen aiding the Spanish in Guienne or raiding the Scottish borders.


While scouring Ebay for these bowmen I picked up some other old Citadel figures to use for the command bases. The chap pictured above holding his sword out stretched is an old Empire Artillery crewman with the linstock replaced with an Assault Group sword. Granted his head gear is a little Germanic but I couldn't resist including him in that base coat. The chap next to him is a very old Citadel fighter miniature with the sword and plume replaced. I think he works really well as an early 16th century man-at-arms in half harness.

As mentioned above I will work on some skirmishing archers for this collection. It also needs a few Border Horsemen and some artillery with the crew in the Tudor Base Coats to complete it. Possibly some marching bowmen as well as I have a few different figures in mind for this. When accompanied by some Landsknechts and Gendarmes they should make quite a force!