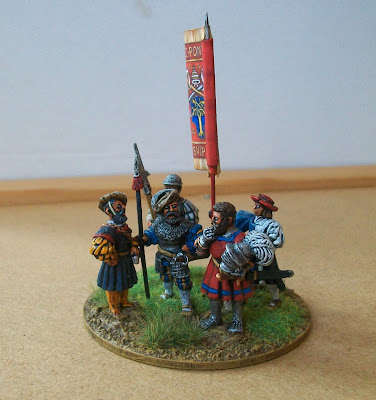 To start off the New Year here is a quick post to show the second of the Steel Fist miniatures I've completed from the 16th century dismounted knights kickstarter. I have used this figure, along with a few others that did not make it onto bases during the great rebasing of 2015 to create a second command base. Unlike last months post this base is for slightly later - around 1510 to the 1520s. The idea is that a dismounted commander, accompanied by a valet with his banner, is discussing plans with some Landsknecht Captains. I have tried to make the composition demonstrate that they are in conversation with each other. The banner is from Petes fantastic flag range but as normal my flags are interchangeable so I have painted the figures up as generic officers. This means the base has plenty of potential uses, just change the flag for the corresponding commander.

As a brief aside, from what I have read about armies during the Italian Wars it seems that the overall command structure could be fairly informal. An army commander, normally a high ranking noble, would be appointed in the absence of a monarch as the operational commander, so to speak, but many of the decisions would be made by a more informal committee. This was composed of other nobles, appointed in command of the cavalry and infantry sections of the armies various "native" troops, and of the leaders of the various mercenary forces which made up the army, often constituting a major part of it. An example of this is in Blaise de Monlucs memoirs where he talks of the meetings between himself and the other captains during the Siege of Siena in the 1550s. From what I can recall, despite being in a nasty siege, they seem to find a lot of amusement from the fact that Monluc has to redden his face artificially to create the impression of being in better health than he actually is when addressing the soldier! The problems of this kind of command are however clearly demonstrated by battles like La Bicocca where the Swiss captains under Albert Von Stein demanded a head on immediate attack of the Imperial position, against Lautrec, the overall French commanders wishes. This of course led to disaster.

I want to make the most of every figure from the first Steel Fist kickstarter so will try and do a different base for each, they won't all be command ones. I think I will use some of the more action posed knights for attacking halberdier bases of Landsknechts or other infantry that can be fitted into the Pike Blocks. I haven't decided yet. I have also received the Gendarme figures from the second Steel Fist kickstarter and they are magnificent sculpts. It will be a while before they get painted though. Hopefully I will have some more English up next as I am making some pretty good progress on a set of English Archers for the 1513 campaign.