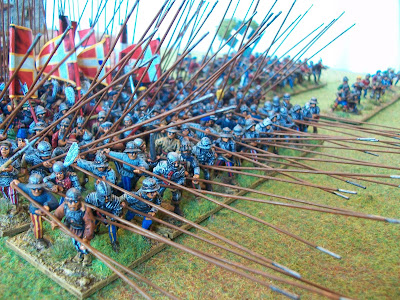 It is finally finished! I have completed the extra pike bases that I have been working on for some months now and here are the results. I have entitled the post Picard Pikemen as I chose to photograph them as such for this post. The flags are all interchangeable so these troops could be used to represent French, Spanish or Italians, although having said that I think they are most suitable as French or Spanish. They are best suited for the late 1490s into the early 1510s - after that clothing styles change significantly but at a pinch I would use them for infantry up to the 1520s.

The first photos show two pike units of 16 bases each, around 96 figures per block taking off a few for the command bases which only have five figures on some. I have then included some more detailed images of these command bases as I enjoyed working on them and was really pleased with the results. I have swapped the banners in some of these. In fact it is annoying as I think the rear bases of the pike blocks are better sets of figures than the front attacking bases! Finally I created a big block of 30 bases which is shown in the last photos.

The Perry Miniatures plastic late 15th century sets were really useful as I have done loads of head swaps with them, especially on Assault Group figures. Amidst the Pikemen are also pipes, drums, two handed swords and a nasty selection of polearms. My aim was to create a set of infantry that did not look too much like a late medieval pike block, I wanted enough early 16th century clothing and armour styles present to help set them in the early Italian Wars and I hope I have achieved that? What do you think? Ideally I would like to have units in the collection that could specifically represent Spaniards, Italians and French but this is achieved by other figures - the Italian Infantry with the painted shields, the Spanish Jinetes and Rodeleros and so on, so having more generic pikemen does not detract from the flavour of the armies - especially when they are marching under the correct flags.

I'm going to work on a few smaller projects next as painting this many figures did become quite a task, especially when I was doing minor conversions and head swaps on a lot of them. Six figures per base in close order creates the look I want for the pikemen but it also means you have to paint a mountain of figures!