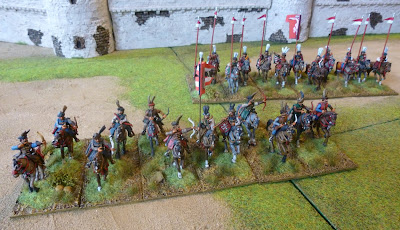 The second unit for my early 16th century Hungarian army is a group of horse archers. As with the Hussars much of the inspiration for them has been taken from Gyozo Somogyi's "The Army of King Matthias 1458-1526" https://www.amazon.co.uk/Matthias-1458-1526-Gyozo-Somogyi-2014-05-04/dp/B01FKUVRR4/ref=sr_1_1?dchild=1&keywords=armies+of+king+matthias&qid=1604313164&sr=8-1. The superb battle of Orsha painting, which I discussed in last months post, has some great detail of these kind of troops which, while not Hungarians, bear a close similarity to those shown in Gyozo Somogyi's art work. I have included a couple of close ups from the painting below. Other than this I have struggled to find many contemporary images of these light cavalry. The Weisskunig has a great image of a king, I am guessing Maximilian I but frustratingly I am never sure what all of the plates of the Weisskunig are meant to be representing, riding along with Gendarmes and what appear to be Hungarian cavalry. In this image, again shown below, a couple of Hussars can be seen in the top left with what looks to be a glimpse of a horse archer with an extravagantly plumed hat in the top right.

In an attempt to represent these cavalry I have used a mixture of later 16th early 17th century Hungarian horse archers from the Assault Group, https://theassaultgroup.co.uk/product/hungarian-light-horse-with-bows/, with an Assault Group Cossack Trumpeter and a couple of Foundry Cossacks in the mix as well. To bring these figures closer to the late 15th early 16th century I have added the long sleeves typical of Eastern European dress in these decades to all of the miniatures with green stuff and have modified the head gear of most of them with green stuff or additional plumage. Hopefully this captures the flavour of the art work in Gyozo Somogyi's book and the images shown above.You can probably tell there is going to be a theme developing with the addition of all these extra sleeves on figures in this army!
The resulting unit is shown below. As with last months post the banner, bearing the Virgin Mary and child, is taken directly from "The Army of King Matthias 1458-1526" and was part of the flag sheet I put together for this army that Pete of Pete's Flags, https://www.ebay.co.uk/sch/petes_flags/m.html?_nkw=&_armrs=1&_ipg=&_from=, kindly printed for me. The archers fit in really well with the Hussars and when mixed with other figures in my collection should really help to give the army a Hungarian feel. I am not finished with the Orsha painting though, I think the next unit for this army is going to be another crack at the Hussars, this time trying to get them to match those in the painting as closely as possible.