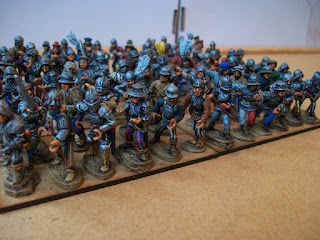 A couple of posts back I mentioned that I was working on some more generic pike to swell the ranks of my Spanish, French and Italian infantry. This is my progress so far, 72 figures, making 12 bases of pikemen. I had already completed 9 bases, predominantly of figures by the Assault Group. I had been waiting to see if any other manufacturers released more figures that I could use to represent early 16th century infantry that don't look like Landsknechts or Swiss. As this hasn't happened I decided to bite the bullet and have a go at swelling the ranks using more Assault Group figures as well as a big mix of late 15th century miniatures.

So the aim here is to paint up a big block of pikemen that don't look like Landsknechts but don't look too medieval either, they need to have plenty of details that will tie them into the early 1500s and not look like a Swiss Kiel from the 1470s! Ideally I would have liked to have been able to say some are distinctly Spanish, some French and some Italian but for the moment I am just going to go for a more generic look. I may however base them up with this goal in mind, so more Italian style troops will all be on the same base for example.

I have included some pictures from the Wiesskunig (would any of my ramblings be complete without a few!) to give an idea of what I am aiming for. In the first two images Landsknechts can be seen in combat with infantry that look distinctly less "modern" than them, with more 15th century style armour. The longer skirted coats can also be seen in evidence - I have a dozen or so figures in these yet to paint from the Assault Group that will form the back ranks of the block. I am aware that when these woodcuts were completed c.1514-1516 the opponents may have deliberately been made to look more archaic than Maximillians heroic troops, those in the first picture especially look to represent some kind of town guild from the banner they carry. Reservations aside images from the early 16th century focus so heavily of Swiss and Landsknechts that it's great to see some depictions of other infantry.

The third image of the crossbowmen at the edge of a pike block again shows that while the clothing has changed the armour looks much the same as that of the late 15th century, with Sallets and Kettle Hats or War Hats being depicted. Finally I have also included one of Paul Dolnsteins great sketches showing a Swedish Knight in combat with a Landsknecht from around 1500 ( I think I have shown this picture on the blog before). Apart from the rounded sabatons the knights harness is very much that of the late 1400s and I have included a few men at arms in the block in some older harnesses, some complete and some in three quarter harness wearing boots.


The figures painted so far can be seen below. Apologies for the photos, it's very overcast today and I cannot get great light. I have used lots of figures from the Assault Group as they were sculpted specifically for the Neopolitan campaigns of the late 1490s to early 1500s and help to stop the block looking too medieval. Some Perry late medievals have made it into the ranks as well, they are excellent sculpts, the only problem being that they are so perfect for the 1470s-1480s that the ones in coats and doublets need to be hidden amongst the ranks as they are such distinct 15th century styles. I have also added some really old Wargames Foundry figures, a bit of a nostaglia thing for me. I really like these old figures sculpted by the Perrys and could not resist having some of them in the ranks. I think some of them in the half or three quarters armour work really well for this project as they have that feel of the infantry in the wood cuts. The Foundry figures are shorter than the more recent TAG and Perry figures so you may notice I have raised their bases using plasticard - its a good trick and is not noticeable once they are all based up.

So this is the progress so far, still loads of figures to do, as well as the dreaded pikes to cut and paint. I will also paint up halberds and other polearms for some of the miniatures. I have done a few head swaps and added beards and plumes of feathers to some of the figures just to bring them more into the 1500s. This is going to be a big block, or a series of smaller blocks, say 9-12 bases each, that can represent different bodies of infantry.  I am potentially aiming for 30 bases when added to the 9 I have already completed, so too much converting will mean it takes forever, not forgetting that I still loathe using green stuff. I swear I am getting worse rather than better at using it!