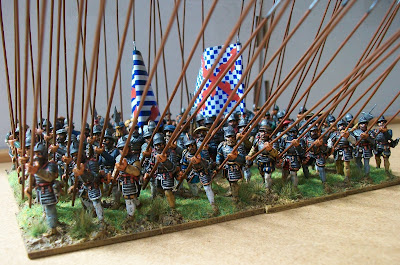 A few decades deviation from the early 16th century today. A while back I painted up some of The Assault Groups Mid Tudor figures to form a small pike block: http://camisado1500s.blogspot.co.uk/2014/08/imperialist-pike.html . I was really impressed with the figures, especially the detail that had been put into sculpting the armour and the buckles, straps and laces that it was worn with. When The Assault Group expanded the range to add the Valois French I was keen to pick some up and create a much bigger block. I took advantage of a deal TAG were offering at SELWG in October where I think it was 20% off any preorders to be picked up at the show.

So here they are, 70 figures in total, including most of the original 20 from the first post. They are a mix of The Assault Groups Tudors and Valois French with no head swaps or conversions this time. I would argue the figures can be used as fairly generic pike from the 1530s through to the 1560s, though by the 1560s some of the clothing styles and armour may be a bit dated. They would be fine to represent pikemen in the early French Wars of Religion or even the start of the Dutch Revolt at a pinch. I have painted them up so they can be used to represent different nationalities, they are shown here as Habsburg troops. The flags are by Redoubt Enterprises, I think they are intended for the Thirty Years War but are also suitable for troops fighting for Charles V in the mid 16th century. In fact, carrying these flags, these figures are great for the troops who fought in the later Habsburg Valois Wars in battles such as St Quentin in 1557 and Gravelines in 1558.

So far for this project I have this unit and the mounted arquebsiers: http://camisado1500s.blogspot.co.uk/2015/06/pedro-de-gamboa-and-mounted-arquebusiers.html . I am currently working on some shot to accompany the pike. I am going to paint some skirmishing arquebusiers and some marching ones as well. This is more of a side project to my earlier collection though, so I think I will return to the earlier 1500s after that. Saying that I would like to rebase all the Tudor figures I painted up a while ago at some point as well!