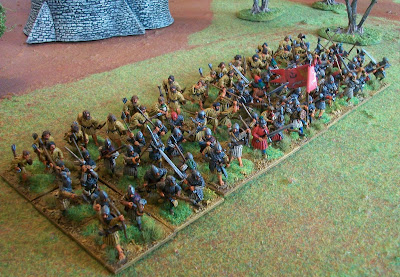 A slightly simpler post for this month. Pending the release of some Irish Cavalry by Perry Miniatures (Michael did say he was going to do some on Facebook!) I am otherwise pretty close to completing my 16th Century Irish Army, well for now at least. Of course when Michael Perry sculpted these miniatures I immediately ordered some packs to paint up for the Irish force I was working on. The results are shown below.

They are really great figures and I love the attention to the original sources. If you have a look back at some of the contemporary images in my post on Kern and Galloglass: http://camisado1500s.blogspot.co.uk/2018/01/of-kerns-and-gallowglasses-is-supplied.html, this attention to detail can be seen. From the famous Dürer image one of the claymores, one of the helmets, the cotun, the axes and even the haircuts have made it onto these miniatures. Similarly if you have a look at the Lucas D'Heere Kern from 1575 you can seen that one of the Galloglass has been modelled wearing the exact same helmet as the Kern in the centre. With the Kern the long baggy sleeves of the contemporary pictures have been beautifully done as have the pipers and the Ionars, the short jackets with lace up sleeves. A Kern miniature in the command group even has the same style leather helmet as that worn in the "Irish Kern from Henry VIII's reign" image.

One thing I find a little odd is that they have released them as part of their "Wars of the Roses" range.  While many of the sculpts are perfect for the 15th century I would argue that some of the little details on the Galloglass and especially the Kern's jackets or Ionars are more suited to the middle of the 16th Century onwards. It's hard to tell, as other than the grave effigies for the Galloglass we have far less evidence to go on for the 15th Century Irish. It's really hard to know how many Gaelic Irish came over to fight in the Wars of the Roses battles that Anglo-Irish Lords were involved in and what they looked like. It seems when it comes to the Wars of the Roses historians are still struggling with the composition and appearance of the English forces! Have you ever seen any 15th Century sources for blocks of "Billmen"?

Anyway before I get too side tracked, to me the Kern's jackets in particular have a very mid-Tudor feel to them. The Irish weren't completely immune to the influence of Tudor fashions in this period. Interestingly in the Dürer image of 1521 although one of the Kern is in a "jacket" it is of a different style to those seen in the later images. My feeling, at the moment at least, is that the Ionars are a Mid to Late 16th Century fashion. As my force is intended to be for the 16th Century, as I am sure they will be for many Wargamers, this is not really an issue. In fact I love that so many of the little details have made it onto the miniatures. I can't wait to see how the cavalry look when they are sculpted.

When I posted up the Redshanks a month ago I mentioned how in collecting a 16th Century Irish army it has also given me a large Highland or Western Isles contingent to use for a potential 16th Century Scots army. As these warriors shared a very similar Gaelic Culture and fought against and alongside each other it seems they often looked identical. I couldn't resist having a look at the miniatures which are suitable as Western Isles or Highland Scots arrayed as one force.

There are probably too many aristocratic warriors in mail with two handed axes in the warband shown here but other than that I think the different manufacturers work really well together. These chaps could easily be used to form the Scots right wing under Argyll and Lennox at Flodden or part of the left wing which was comprised of Home's Borderers and Huntly's Gordon Highlanders. In the final photo I have shown my "generic" early 16th century pike, who are playing the role of Home's Borderers, alongside the Gaelic troops under Huntly's banner. It looks like a 16th Century Scots force is slowly taking shape and not a kilt in sight either!