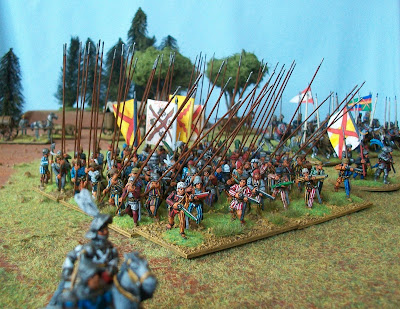 Having completed my block of early Landsknechts I was unable to resist getting a few more pictures of them over the Easter break. The brief Swabian or Swiss War which was fought by Maximilian I and the Swabian League against the Swiss Confederacy in 1499 has always been of interest to me as it pitched the Landsknechts and Reisläufer against each other and only furthered their already fierce professional emnity. The details of this conflict have always remained a bit of a mystery to me as there has been little written on it in English that I am aware of. Interestingly there is an episode of "Medieval Dead" which investigates the skulls found at Dornach and is worth a watch if you can track it down.

If you have read this blog before you will know I love to include some contemporary art if possible. I have included pictures of the Swabian War below as I think they capture some great details of how the cavalry and infantry of the Holy Roman Empire and Swiss Cantons looked at the turn on the century. I have been lucky enough to have seen the second image, the Schweizerkrieg, in the flesh, so to speak, in an exhibition in Vienna. The miniatures photographed below attempt to capture the style of the Habsburg troops of this conflict and show how Maximilians forces may have looked at the very start of the 16th Century. I have even tried to place buildings in the background that look suitably Germanic! 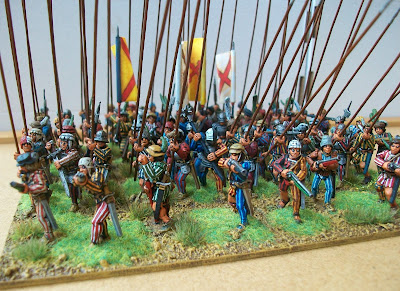