Marching Arquebusiers and the Mid 16th Century Troops so far 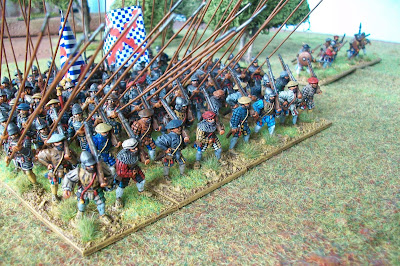 Apologies for the catchy title, it hardly rolls off the tongue! To follow on from my last couple of posts here are some pictures of a few more Arquebusiers to accompany my Pikemen and Skirmishing Shot for the Mid 16th Century. The figures are all by The Assault Group and the only change I have made to them is to remove the Fleur De Lis badges that they were all wearing. This is simply because I want to be able to use them for more generic infantry rather than specifically as French Troops.

While the first set of Shot were based as skirmishers these chaps are in far more sedate poses and based in closer order. My intention is for them to accompany the Pike as the "sleeves" of Shot that were beginning to develop in the mid 1500s, to become the Pike and Shot formations more familiar to the Late 16th and 17th Centuries. I have also included a picture of the whole Mid 16th Century collection so far, I am yet to rebase my 1540s Tudors.

I will be returning to this blogs more familiar territory of the earlier 1500s for a while although at some point I would like to return to this collection and add some more to it. I was hoping Warlord Games might release some suitable figures but I am a bit unsure of the figures for the 1560s they have released so far. We will see.