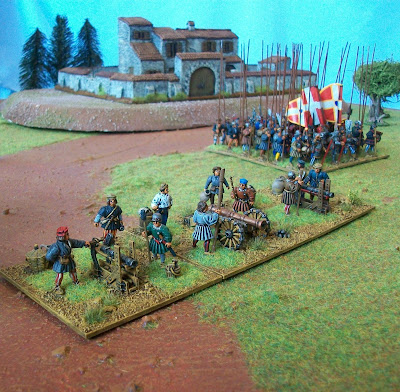 In between some rather big projects (I am currently half way through another big pike block) I have had time to work on a few more artillery pieces to add to the already quite varied arsenal in the collection. All three of these pieces I had painted previously but I stripped them down using Dettol and started again from scratch. I kind of wish I had done this with some of my other guns as I painted some of them years and years ago for my old Wars of the Roses collection and I could have done a better paint job now.

The two breech loaders are by Old Glory and the centre gun is from the Dixon Flodden range. On the US Old Glory site the breech loaders are shown put together the other way round, http://www.oldgloryminiatures.com/proddetail.asp?prod=WRE-04 - with the wooden supports at the back and the metal elevation device at the front. This just doesn't look correct to me - all contemporary drawings I've seen show this style of gun with the metal part at the back. If the wooden supports were at the back surely the recoil of the gun would damage them. I may be wrong though - let me know if I have put them together incorrectly!

The crew are a mix of converted Perry miniatures and yet more of The Assault Group Papal Guard converted into artillery crew. I am really finding a lot of uses for that one pack of figures! There is a lack of really nice early renaissance artillery crew in 28mm that aren't in Landsknecht dress. The Foundry and even some of the old Games Workshop Empire figures are excellent but they are all Landsknechts. If you want figures to represent French, Spanish or Italians you have to search a little harder to find nice figures.

So here they are, shown with a small group of French Pikemen supporting. They are fairly generic however and meant to represent artillery and crew for the mid 1490s through to the 1510s. In between the two breech loaders is a more "modern" culverin whose paint job was inspired by Maximillians Zeugbuch, as shown below.