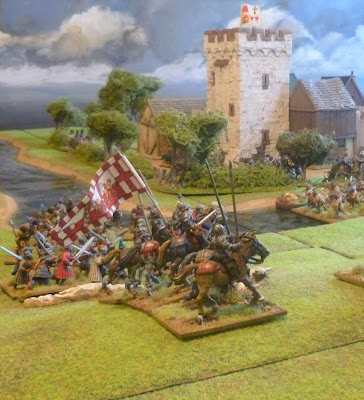 For our second game a couple of weekends ago Stuart and I went for something totally different from Wenzenbach. Stuart was keen to get his new beautifully painted kern, https://stuartsworkbench.blogspot.com/2021/11/irish-kern.html, on the tabletop so we continued our exploration of Ireland in the late 15th and early 16th centuries. The various wars, skirmishes and feuds that took place in Ireland during this period provide the basis for all kinds of wargames scenarios. So far we have covered events from early Tudor interventions in Ireland, Poyning's 1494-1495 campaigns and Surrey's 1520-1521 deputyship and there are still events from these that we are yet to game. For this game we decided to focus on the return of the 9th Earl of Kildare in 1523 and his campaign to reinforce FitzGerald power following his absence. The scenario is taken from a letter Kildare wrote to Henry VIII on 24 May 1523, https://www.british-history.ac.uk/letters-papers-hen8/vol3/pp1273-1287, as well as information in "Gaelic Ulster in the Middle Ages", by Katharine Simms.

The 9th Earl of Kildare in Ulster
Following his time spent in England after accusations of his maladministration Gerald FitzGerald, the 9th Earl of Kildare, was allowed to return to his Irish homeland in January 1523. The Earl of Surrey had acted as Lord Deputy during Kildare's absence and on his return he was keen to assert his authority once again despite the fact Piers Butler, the 8th Earl of Ormond had since been appointed Lord Deputy. In May of 1523 in support of his O'Neill allies, who had been at war with the O'Donnell, Kildare led an army into eastern Ulster in a raid against O'Donnell's ally, Aodh Buidhe (Hugh) O'Neill of Clandeboy. In a letter to Henry VIII of 24 May 1523 Kildare describes how the Clandeboy O'Neill had employed 1,500 Scots mercenaries. During the campaign Kildare destroyed Clandeboy's castle in Belfast along with two other tower houses belonging to the MacDonalds of the Glens (soon to become famous as the MacDonnell's under the leadership of Sorley Boy), the source of the Scots mercenaries. He also took the mayor and some of the aldermen of Carrickfergus prisoner as they had been trading with Bretons and Scots.

Based on the above campaign we decided to centre the game around the Earl of Kildare attacking one of the Scots tower houses mentioned in his correspondence to Henry with a mixture of Anglo-Irish (or  "English of Ireland" to use a contemporary term) and Gaelic troops. Between us we had a combination of buildings that when put together made a suitably impressive looking tower house. The tower house was defended by Aodh Buidhe O'Neill of Clandeboy with some of his own troops as well as some of the 1,500 MacDonald Scots referred to in the letter. Most of the Scots were Gaelic redshanks but we also included a motely unit of Scots pike, Stuart's Scots pike blocks are so impressive it's hard not to use them when the chance arises!

Rather than having lots of special rules we decided to fight this one out as a straight up fight, or more appropriately a large skirmish. As always we used our heavily modified Renaissance Rampant adaptation of Lion Rampant. To really reflect the hit and run nature of the fighting in Gaelic Ulster the one extra rule added was to reused the dice bag method that we first tried in our Surrey's 1520 raid on the O'More game back in June of this year (see the second scenario here: http://camisado1500s.blogspot.com/2021/06/this-was-chaunce-of-warre-lord-maxwells.html). Every turn a dice was pulled out of a bag and the army it represented could then take a turn with one unit. If that unit failed its activation this didn't end the turn but meant that unit alone could not act that turn and another dice was then chosen. As units were destroyed or routed the dice that represented them were removed from the bag. We also added a "joker" dice and the turn was immediately over if this was pulled from the bag. Challenges and rolls for battered units were made by both players at the beginning of each turn.

We rolled a dice to see who controlled which army and Stuart took the Clandeboy O'Neill and MacDonald forces while I took command of the FitzGerald army and its allies. The forces we used were as follows:


This was very much a clash of two halves. The fighting opened with most of the Clandeboy O'Neill cavalry and some of the Scots, including the unit of pike, attacking the Anglo-Irish section of Kildare's army. Whilst the Irish horse and redshanks launched darts, javelins and arrows at the billmen and archers from a distance the pikemen marched forwards towards the FitzGerald lines. Meanwhile directly in front of the tower house the Clandeboy O'Neill troops used the shallow river and hedges as cover whilst they skirmished with Kildare's Gaelic troops and kept them at a distance in this manner.
Kildare's archers took their toll and by the time the Scots pike crashed into the Anglo-Irish troops they were already weakened. After a brief melee the pike were pushed back only to then be routed under a close range hail of arrows. Similarly some of the accompanying redshanks were pushed back by the Anglo-Irish billmen with the Irish cavalry also being forced away by the rain of arrows.

With a large part of the Clandeboy O'Neill and MacDonald force routed it looked as if all Kildare had to do was surround the tower house and crush the remaining defenders. Aodh Buidhe O'Neill redeployed some of his Kern that had been kept out of harms way on the sea shore. As the FitzGerald forces tried to push in on the fortress they found stiff resistance from the kern and redshanks hiding in the shallow river and hedges close by. Aodh Buidhe's kern used the difficult terrain to their advantage and defeated Kildare's galloglass. The Earl's only success was that his culverin was put to good effect and with a couple of shots scared off some of the defending redshanks.

As the fighting escalated around the tower house, with both sides slowly feeding more troops into the fight, the Earl of Kildare himself led a charge of his personal retinue into the shallow river in an attempt to bring down Aodh Buidhe O'Neill. The nimble Irish cavalry deftly evaded his heavier horse and he and his retinue were defeated in a brief skirmish in the water. At the same time Clandeboy O'Neill kern carrying arquebuses came to the fore. Being reminded of the fate of his father, who was mortally wounded by a fire arm in 1513, the 9th Earl thought it prudent to retreat from the river with his horsemen before sounding a general retreat. This was one Scots tower house he would have to leave standing.

This was a really close game that looked like it could go either way. The dice bag method for activations yet again brought a real element of chaos to the order in which events took place and we both had to gamble on who would activate a unit first during the skirmishing. Added to this an unusual amount of 4s were rolled during the activations which would then leave the unit that failed to activate in a real predicament. As with the other 16th century Irish games we have played this is another campaign which was followed by further events which provide potential for other scenarios.

The year following this campaign, 1524, Kildare was once again appointed as Lord Deputy of Ireland. The O'Donnell and Kildare made peace after an impressive show of strength by Magnus O'Donnell who had fortified Port na dTri Namhad with trenches and hired large numbers of Scots. His ally, Aodh Buidhe O'Neill of Clandeboy, featured in the scenario above, refused to surrender and was killed when Kildare led a further campaign against him. I am sure we will revisit these early 1520s clashes in the future.
Posted by Oli at 11:38 10 comments: