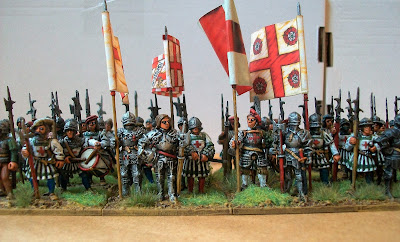 This is the first unit for my 1513 Tudors. Having already dipped into the Tudor armies of the 1540s I'm jumping back a few decades to the armies of Henry VIIIs youth. It's an army I have attempted twice before, once in 15mm and once in 28mm. Both armies being sold on Ebay long ago. These earlier attempts, the lack of really good figures for the English and the fact it's an army that Stuart is covering in such incredible depth and so beautifully on his blog, http://stuartsworkbench.blogspot.co.uk/, meant that I was going to give the English for this period a miss and focus on some of the other Western European armies of the era.

My hand was forced however when Pete produced some excellent flag sheets specifically for the English campaign in France in 1513, http://thegreatitalianwars.blogspot.co.uk/2016/07/henry-viii-invasion-of-france-1513.html. These are simply superb and although none have actually been used on this unit they will really add to the army. Being a Wars of the Roses reenactor, for my sins, I've always had a love of the swallow tailed standards with the St Georges cross at the hoist (whether or not they were actually used on the field is a debate for another day!) so I simply could not resist having a go a this army for a third time......

Already having a large Italian Wars collection, with changeable banners and standards, means a lot of the figures for the army are already done. Blocks of Landsknechts and the heavy Low Countries Men-at-Arms that Henry hired from Maximilian to augment his forces are no problem, I can simply use the figures from my existing collection. The troops needed are blocks of Billmen, of course English Archers and maybe some "Northern Staves", the Border Horsemen that Henry brought over and performed well in the 1513 Campaign.

For the Billmen I already had an idea of which figures could be used. Having studied the figures on Stuarts blog for ages I wanted to do something a bit different. Also the fact that I am hopeless with greenstuff and don't have Stuarts endless patience meant that I was going to have to find another way around the problem that no one manufactures good miniatures for the English in 1513. I fell back on what have become my classic go to figures, the Italian Swiss/Papal Guard by The Assault Group. I have used these figures so many times for various projects recently I should maybe rename the blog as "How Many times can you reuse 4 figure poses". Pete from The Assault Group very kindly let me buy them in Unit Builder sets to assemble a large collection of them. Some simple head swaps, the addition of bills and various other polearms along with the odd steel buckler on a few of them and they suddenly look like Tudor Billmen. I am aware that the base coats aren't one hundred percent like those Stuart has sculpted, they don't have the short sleeves that characterise them, but this was something I felt I could overlook.

Having the figures in Tudor base coats sorted the unit needed variation. I did not want any figures in Wars of the Roses style livery coats or to have so many late 15th Century styles within it that it looked like a Wars of the Roses retinue. A few specific poses from the Wargames Foundry Landsknechts, some not even needing head swaps, helped to add more "fashionable" soldiers to the block, most of them wearing doublets in Tudor colours. All of them had their Katzbalgers replaced with late medieval swords to bring them more into the Tudor style. A sprinkling of Perry Men-at-Arms in late 15th Century harnesses or half armours along with some more humble troops in padded jacks were added. Again with a few head swaps these fitted in well with the other troops.

Initially I was going to base them four to a base, like my Italian Infantry. This just didn't look imposing enough however and they looked as though my pike blocks, which are very densely based, would simply role through them. So of course the project expanded, I decided it would be six to a base, the same as the pike blocks. I considered painting the base coats maybe just white, or perhaps white and red as it seems there were variations on this theme during the 1510s and 1520s. In the end I've gone with the classic white and green with the St Georges cross in red as it is so representative of the Tudors. As Surreys unit at Flodden was also in a white and green livery this means they would also be suitable for this battle.

A couple of other different things were tried while working on these. One was the blackened armour on a Men-at-Arms shown in an image below. I was watching a lecture on youtube by Tobias Capwell, https://www.youtube.com/watch?v=COAIQPsgZWY, where he explains that the polished, shiny finish of plate harnesses could often amount to up to 80% of their cost! This has made me rethink how many figures I will paint in bright shining armour! Obviously it was done, as the lecture cleary demonstrates, but soldiers would often be in much duller armour that had not been polished. The figure was simply drybrushed in a dull metallic silver and then given two washes of black ink. You may notice the same technique was used on a few of the bills and helmets.

The second experiment was to try sticking small paper crosses onto some of the padded jacks of the Perry miniatures to represent the St Georges Crosses that had to be worn by the English troops. The aim was to make them look like cloth crosses that had been stitched on, although padded jacks could also simply have the crosses painted on as well. I am fairly happy with the results, although it was such a fiddly job doing them. The tiny pieces of paper were a nightmare to try and glue in place.

So here they are, seventy figures in total with a ridiculous 55 head swaps. The Perry Wars of the Roses plastic sets are endlessly useful for converting these figures. I haven't actually ordered the newer Tudor flags from Pete yet, so they are shown here under some of the flags from his mid Tudor sets, St Georges crosses and the standard of Sir Charles Brandon who took part in the 1513 French invasion and commanded during the 1523 and 1544 invasions. The larger flag is from Redoubt Enterprises. The flags are removable and the unit will look better with the addition of another swallow tailed standard.

The next question is how to convincingly do the archers? I have already painted some up for this period, but they are not in Tudor Livery. I may do a set of those old citadel figures again, in Tudor colours, but mixing some converted Foundry Landsknechts and Perry Plastic Wars of the Roses longbowmen together could make quite a convincing unit of marching bowmen as well. Let me know if you have any other ideas of how to represent the archers?